Problem
I have to deploy my SQL Server Analysis Services project to a test server then to a production server after testing is completed.  For both of these deployments I need to provide an installation program.  I am not allowed to access either of these servers.  For my own testing I can deploy my project using Business Intelligence Development Studio (BIDS) and this works great.  How can I create an installer that my IT team can use to perform the deployment?

The Type shown above is pretty descriptive of the contents of each file.  The following descriptions of the files are found in the Books on Line page Understanding the Input Files Used to Create the Deployment Script:

When you run the wizard from the command line with the options shown above, the wizard does not step through a series of dialogs; rather it simply generates the XMLA script file based on the files in your project's bin folder as described above.  If you need to change anything in the generated script you can open it up in Notepad or your favorite editor.

If you want to step through the wizard dialogs you can launch the Deployment Wizard from the Analysis Services program group (or from the command line without the /d and /o options) and you will be guided through the following steps:

Navigate to the [project name].asdatabase file in the bin folder of your BIDS project: 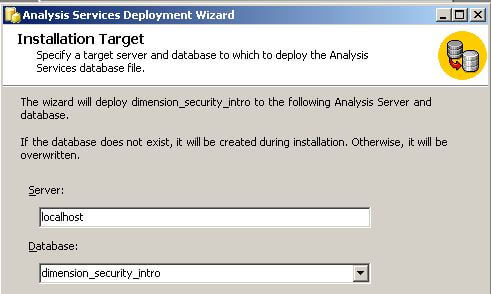 Specify Options for Partitions and Roles

After initial deployment, an administrator may change the partitioning and/or roles and members.  When you deploy you have to decide whether or not to overwrite these settings based on what you have in your SSAS project.  The options shown below assume that you do not want to overwrite those changes.  However you can choose the options that will make the deployed database match what's in your project. 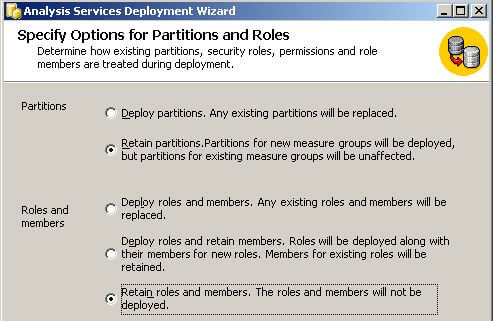 Administrators may make changes to various configuration properties after deployment and you may need to preserve those settings rather than overwrite them with what's in your project.  In the case of data source connection strings, you make not even know the server names and credentials used to connect to them.  Optimization settings will likely change as the size and usage of the SSAS database increases over time.  Again the safest approach is to retain the settings rather than overwrite them. 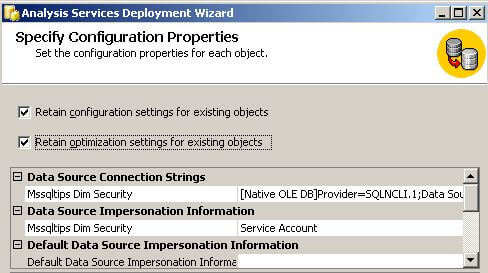 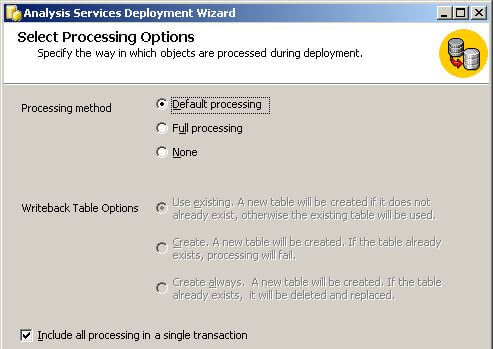 Use this dialog to optionally specify whether to generate an XMLA script and save it in the folder of your choice.  After clicking Next on this dialog the wizard will perform the deployment.  It's a good idea to save the deployment script. 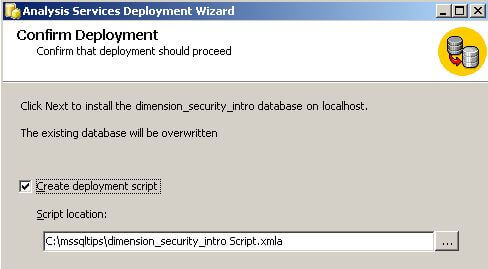 This dialog shows the results of performing the deployment. 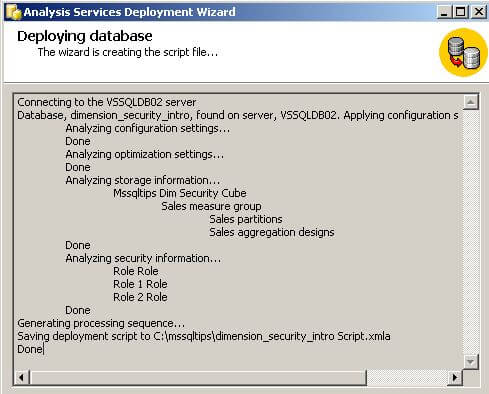 When you use the Deployment Wizard to generate the XMLA script for deployment, you can choose from the following options to execute the script:

ASCMD is a command line utility that is very similar to SQLCMD which is used to execute T-SQL scripts.  You can download ASCMD from the Codeplex page Readme for ASCMD Command-Line Utility (the download is a Visual Studio project that you have to compile).  ASCMD allows you to execute XMLA, MDX or DMX scripts from the command line which is simple and often desirable.  In addition ASCMD supports variable substitution just like SQLCMD; i.e. you can specify variables in your script and assign them a value on the command line.  For instance if you had a variable in your script such as $(database), you can execute the script and set the value of the database variable on the command line as follows: