SQL Server DBAs are expected to know some basic Windows Server administration skills. Traditionally, one of the Windows tools DBAs would learn to use is the Performance Monitor. DBAs who knew how to use perfmon in Windows Server 2003 may still find the Reliability and Performance Monitor in Windows Server 2008 a bit of an unknown when they first see it. However, in addition to all the existing features from the previous versions, this applet now offers some new functionality that can make performance troubleshooting a lot easier. In this tip, I will try to give an overview of this tool.

When you start the Reliability and Performance Monitor applet (from Start > All programs > Administrative Tools), you will see something like the following: 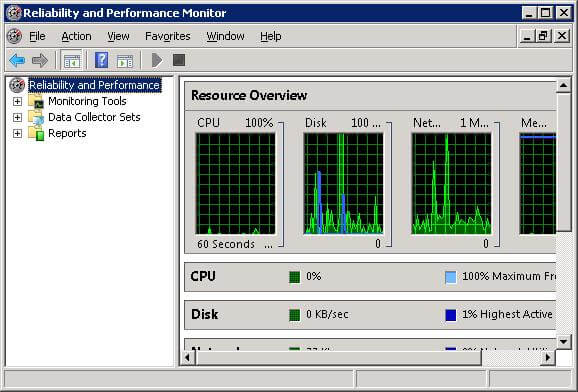 Like most other tools of its class, the user interface is divided into a navigation and a detail pane. The navigation pane divides the application's functionality into four main areas:
Resource Overview

Perhaps the first thing you would want to look at when troubleshooting a slow performing server is the status of its physical resources. The integrated Resource View screen gives you just that information. The tool shows you the condition of the CPU, disk, network and memory of the local server in real-time.  For each of the resource types, the detail section also shows a list of processes running. This can help you identify the process causing the bottleneck. 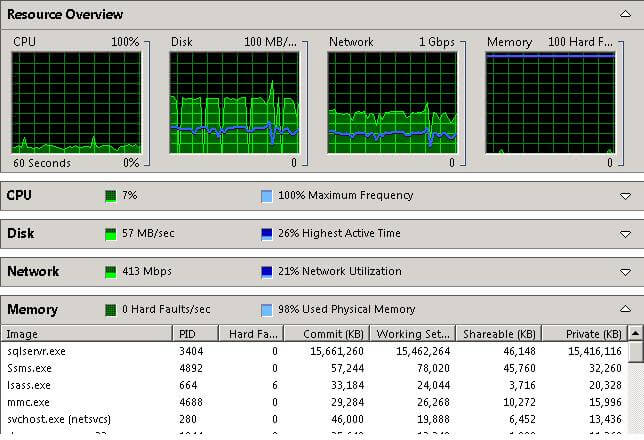 The Resource View is the first screen you see when you start the Reliability and Performance Monitor. You can also start this tool as a standalone applet by either: 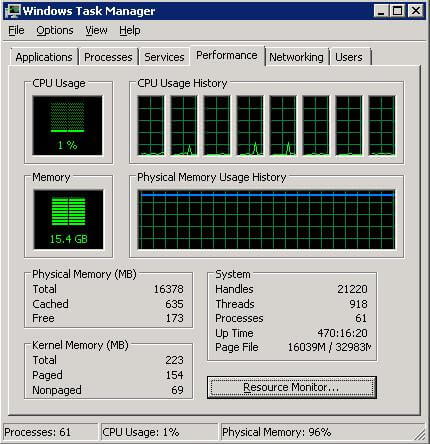 The Reliability Monitor is another invaluable tool in the System Administrator's arsenal for root cause analysis. As the name suggests, this tool tracks the reliability and stability of the overall Windows system. It does so by continuously collecting system related information in the background, analyzing the data collected and displaying the results in an easy to understand graphical format. 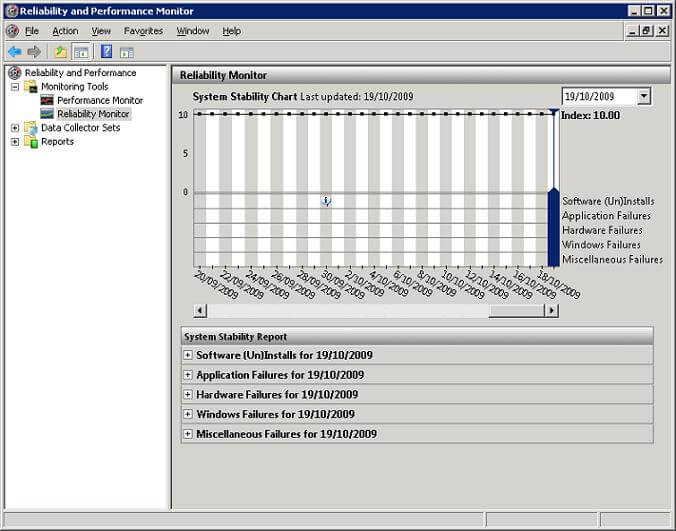 The System Stability Chart shows a graph of the system's Stability Index over a period of time. The stability index is a measure of how "stable" the system is. Reliability Monitor calculates this index by looking at the number of system failures recorded within a rolling  period of time and assigning it a relative value from 1 (least stable) to 10 (most stable).  The top half of the Reliability Monitor plots this stability index rating for each day as a point in a graph . Just by looking at the Stability Chart, you will have an idea about how good or bad your server has been behaving.

If the system encounters some error condition, it will immediately become evident from the chart. The stability index line chart will have a dip under the optimum value of 10 as shown below: Also an error icon will appear in the column for that date. 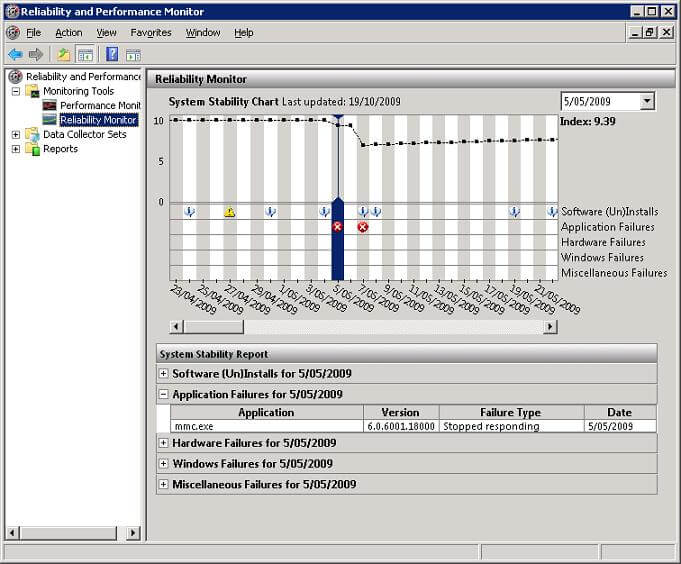 The chart will show an information icon when the system undergoes a successful software installation or removal. If the install or uninstall encounters errors, this will be highlighted by a warning icon (exclamation sign within a yellow triangle). Any other error condition will be marked with a critical sign (cross within a red circle). If you click on any of the columns (representing each date) in the Stability Chart, the Stability Report at the bottom half of the screen will show the system events recorded for that day. As you can see from the figure, a Microsoft Management Console application stopped responding on the 5th of May, bringing down the overall system stability index. Two days later, there was some application installation and again a failure occurred, dropping the index sharply. It took a long time for the system to get back to the normal 10 grade rating.

The Stability Report is tied to the Stability Chart and can show detailed information on the following types of events happening in your Windows Server 2008 system:
Reliability Monitor stores the history of these events for up to one year. However, the stability index is not calculated for periods when the server was switched off or in a sleeping state.

The way Reliability Monitor traps these events is by running a hidden background scheduled task called the RACAgent. RACAgent is really RACAgent.exe located under System32 folder of the Windows installation directory. Windows saves the data collected by this process in locally managed files. Usually the process starts right after the Windows software has been installed, but if it is turned off for any reason, the Reliability Monitor will not have enough data to work with. When there is not enough information, the stability chart will be shown as a dotted line instead of a solid one. If you suspect the RACAgent has not been running, you can follow these steps:

If you want to start the Reliability Monitor as a standalone applet rather than accessing it through the Reliability and Performance Monitoring tool, you can execute the perfmon /rel command from the Start menu's Run dialog box:

The final thing you should probably know about the Reliability Monitor is that you can use it to check the stability of other Windows Server 2008 systems in your network. For Reliability Monitor to be able to connect to a remote server, two things need to be in place:


If both the options are not satisfied, you can get an error message like the following:

"Reliability Monitor cannot report reliability information for computer
or something like:

"When attempting to connect to the remote computer, the following system errors occurred: No such interface supported."

If  you have ensured both the conditions are okay, you can right click on the top node in the navigation pane (shown as "Reliability and Performance") and choose "Connect to another computer" from the pop-up menu. This is much like what is available in Windows Server 2003's Computer Management tool or the Services applet.

Think about this scenario: you are the DBA of your organization - you are trying to create performance baselines for your servers. You create two sets of counter logs - each with the same set of performance counters; one is to be run during peak usage and the other during normal load. You can schedule the logs, specify their maximum size and the format of the output files. However, when you need to rollout the same set of counters in another SQL Server for baselining, there is no easy way to port them - chances are, you will have to recreate the logs in the new server, making it a time consuming process.

It's not only the performance counters that are available in the new version. Data Collector Sets now allow you to capture Event Trace data and System Configuration data as well. The first type of collectors, called Event Traces, help you capture low level trace information generated by various applications and the Windows operating system. If you want to capture the changes to a certain registry key, you can specify it under System Configuration.

The whole process is Wizard driven and we will now see how this works. In the following steps, we will create a Data Collector Set with some basic counters, define a schedule for it and specify the condition for its duration. We will then run it for some time and then view the report. Finally, we will save the collector set as a template.

After the collection process completes, we can view the log from the Reports node in the navigation pane. If you expand the Reports node, you will see all your Data Collector Sets listed there. Underneath each set, you will find the reports for each day when the collector set was run. In  our example, we will see something like the following: 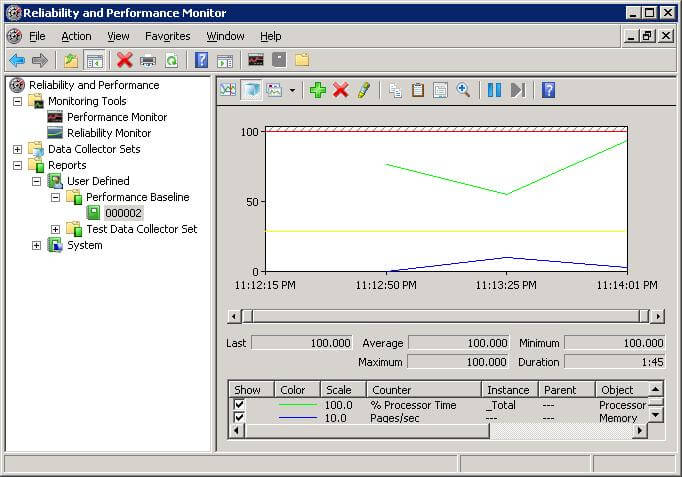 To save the collector set you just defined as a template, right click on it from the navigation pane and choose "Save Template" from the pop-up menu, as shown below. The template will be saved as an XML file. 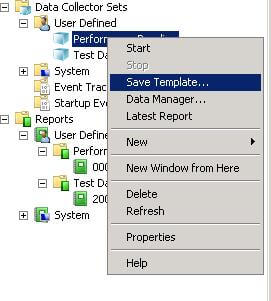 You can now copy the template to another Windows Server 2008 system and start creating your Data Collector Set based on that template. In such case, you will have to choose the option "Create from a template" in the first screen of the Wizard.

In my opinion, DBAs should start building their Data Collector Sets with the system supplied template called "System Performance". It incorporates a comprehensive range of performance counters and some key events from the Windows kernel trace provider. 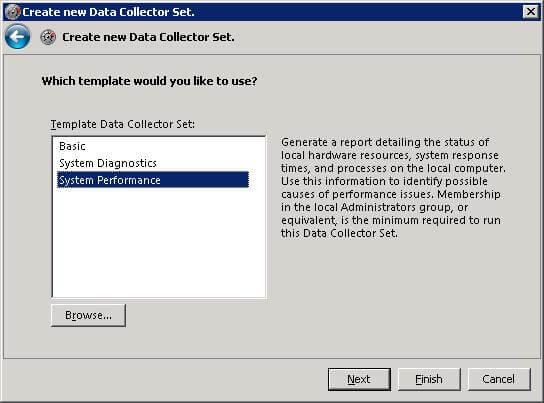 By default the collector set does not come with any schedules attached to it. If you run it, it will execute for one minute. This can be useful if you are trying to get a bird's eye view of your server's performance. The report for the System Performance type Data Collector Set can be quite comprehensive, as shown below. 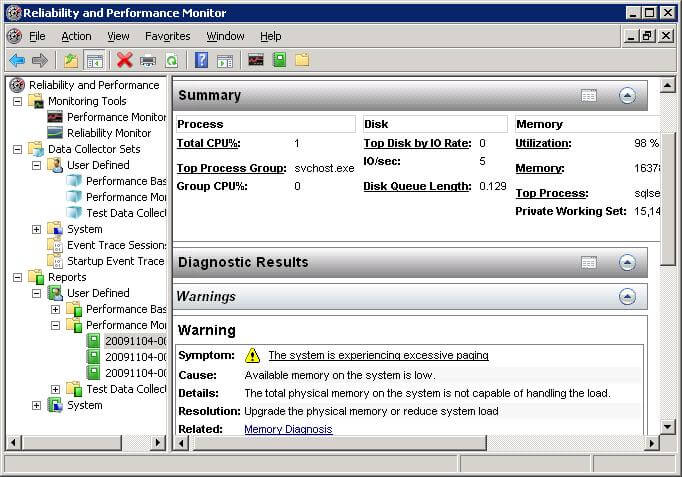 There are also a number of system level Data Collector Sets running at any one time. These collectors mainly capture Windows trace events. It may be worthwhile to have a look at their properties. 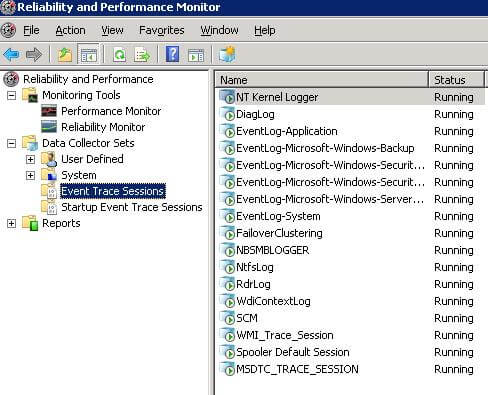