ALTER table operations may have very far reaching effect on your system. So as part of best practices always take time to examine the object dependencies and also consider the data which may be affected by ALTER table operations. The following is based on SQL 2005 and 2008. Older versions of SQL Server may handle things a little differently.

These changes can be made using T-SQL or SMSS without causing a recreation of the table.

Still there are some operations that involve table drop and recreation both through SSMS or T-SQL. So in these cases using SSMS designer would become more appropriate. Following are those scenarios

To test these changes let us first create a table in AdventureWorks.

Now let us go through carrying on these operations through T-SQL. At this stage you may note the creation time of the above table through following script.

You may verify the fact later that whenever we would implement the above mentioned changes through T-SQL the creation time of the object would not change. It means that object has not been dropped and recreated. While if same changes were implemented through SSMS designer then creation time would change to time of operation through designer.

In coming sections we will go through the use of T-SQL for the above mentioned tasks. To verify any change you may use system stored procedure sp_help when required.

At any stage we may be required to add a new column in an existing table. This task may be a performance threat if done through the SSMS designer if the column is not added at the end of the table. Inefficiency depends upon amount of data in table. To fulfill the requirement through T-SQL the following ALTER TABLE statement may be used.

To make compatible with new changes, names of existing columns may need to be changed. In our case, it seems suitable to modify the column <Name> to <FName>.

We would use T-SQL as follows to rename a column.

Column has been renamed to match the addition of LName column.

This could also be done using SSMS without the impact of having to recreate the table.

It is a good practice to explicitly allow or prohibit NULL values. In our case we would prohibit NULL for FName. The following ALTER table statement would be used for that.

Re-Seeding IDENTITY PROPERTY for a column

SEED of an identity column is the starting point for identity values in a table. In some scenarios it may be required to interrupt the automated sequence by allotting a new SEED value. To avoid the overhead of table drop and recreation, we would reseed the EmpID to 100 through T-SQL.

Changing data type of any column

Before changing the data type of a column make sure that data would not be compromised while converting to new data type. This task may be performed by using the following T-SQL command. In our case we would change data type VARCHAR(50) to NVARCHAR(50).

T-SQL would not provide you any extension related to the order of the columns. Through T-SQL you can not create new columns at a position other than at end of previous columns. Similarly you can not change the position of any previously created columns. You would have to use SSMS designer for this purpose or create a new table with the new column and migrate the data from the old table to the table. In either approach table recreation would need to take place.

Again this facility is not accessible through T-SQL directly. You would have to use SSMS designer for altering incremental value of IDENTITY column. 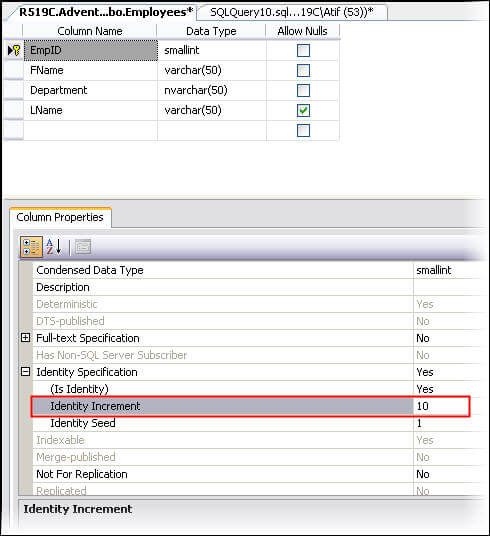 Now each new IDENTITY value would have difference of 10 from the last value.

Removing IDENTITY PROPERTY for a column

Removing IDENTITY property is not directly supported through T-SQL. You have to make use of SSMS designer. Go to table design and set (Is Identity) value to No. Upon saving the changes the table would be dropped and recreated. 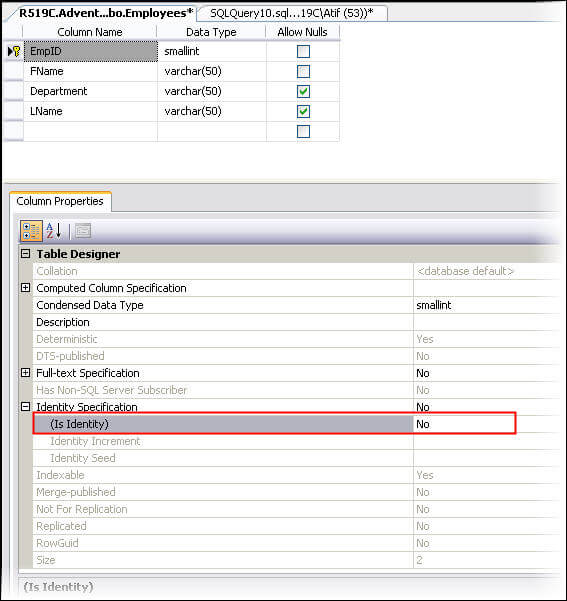 Now table is without an identity column. Do not forget to make appropriate changes in your INSERT code for this table.

You may find other cases where table drop and recreation needs to take place in SSMS designer. If you are using SSMS 2008 then configure it to not make changes that require table drop and re-creation. So that such changes through designer may only be made after proper analysis.

Checklist to Re Architect a SQL Server Database

Getting started with source control for SQL Server