Your situation is understandable. Working with a parent-child hierarchy in a relational database is fairly straight forward, while doing the same thing with a dimension in a cube is not.

Before we get started I would like to provide an example of what we mean by a parent-child hierarchy in a relational database. Using the AdventureWorksDW database, let's take a look at the dimEmployee table and the FactResellerSales table: 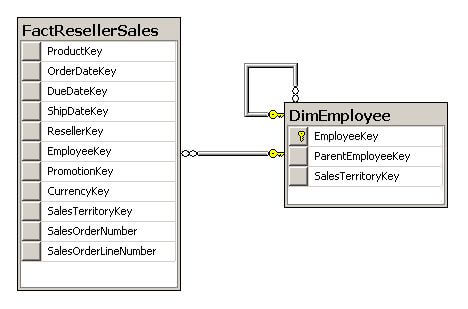 The following are the main points about the above schema diagram:

Reporting on a Parent-Child Hierarchy in a Relational Data Source

In this section we will review a sample report based on the AdventureWorksDW database that came with SQL Server 2005. We will use the following query that leverages a recursive common table expression to report on reseller sales using the Employee parent-child hierarchy:

A partial result set from the above query is shown below: 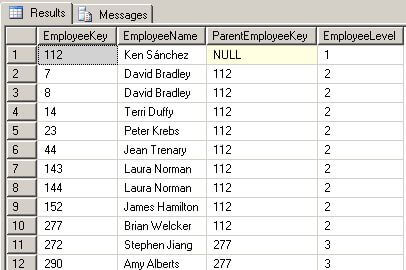 The following are the main points about the result set:

Our sample report report layout is shown below:

Right click on the left-most column of the selected detail line then select Edit Group from the popup menu; you will see the following settings: 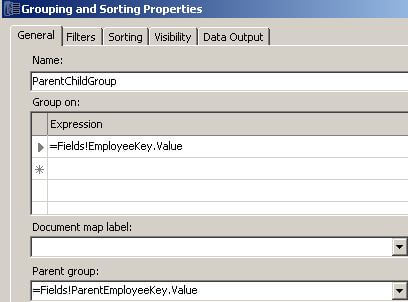 In order to toggle visibility (i.e. enable expand and collapse), the Visibility tab on the Grouping and Sorting Properties dialog has the following settings as shown below: 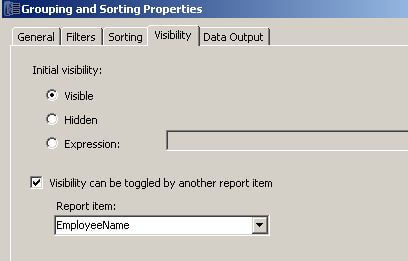 Referring back to our report layout, the Sales Amount expression is cutoff in the screen shot; the full text of the expression is:

The above expression uses the SUM function that accepts three parameters: the expression to aggregate, the scope (i.e. the Name in the Grouping and Sorting Properties General tab), and the value Recursive (i.e. calculate the sum of the row's sales and its child rows' sales).

Our final step to render a simple report is to add a little bit of an indent for our hierarchy. To do that select the Employee Name field in the detail line of the report layout and set its Padding Left property as shown below:

We can now preview the report as shown below: 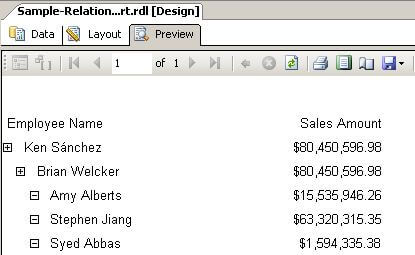 Reporting on a Parent-Child Hierarchy in a Cube

We will leverage the AdventureWorksDW standard cube that came with SQL Server 2005 for our report. The Employee dimension contains the same parent-child hierarchy that we saw in our relational example. If we browse the Employee dimension in the cube we will see the following: 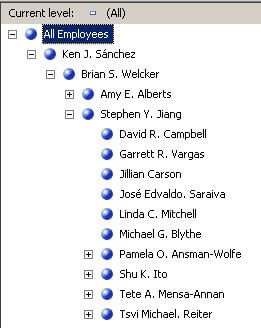 When reporting on a parent-child hierarchy in a dimension of a cube, we need to specify the Group on and Parent group expressions differently than we did in our relational report. The Grouping and Sorting Properties dialog General tab is shown below for our report based on the SSAS cube: 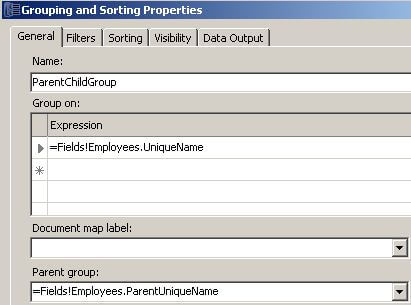 You might be wondering how did UniqueName and ParentUniqueName become available to us. The answer is in the generated query in our report dataset as shown below:

Note that MEMBER_UNIQUE_NAME and PARENT_UNIQUE_NAME are specified in the list of DIMENSION PROPERTIES; this is precisely how those properties are made available.

After making the subtle change on the Grouping and Sorting Properties dialog General tab as shown above, we can preview our report that uses the SSAS cube as its data source: 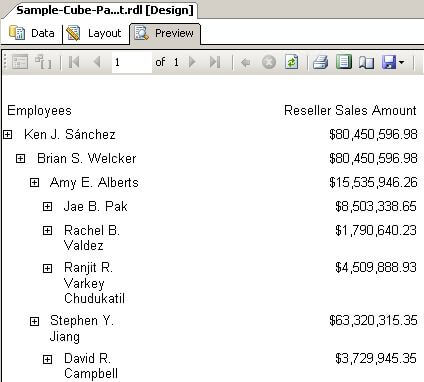