In my last tip "SQL Schema Comparison with Visual Studio 2010", I showed how to compare schema objects, synchronize them or get incremental deployment scripts. This is good way to synchronize the schema objects between two different environments, but we also often need to compare and synchronize the data that tables (which have the same structure) contain. For example we normally define some master data in a development environment during development and would like the same data to be deployed/inserted/updated to Test/QA/UAT/Production environments after development. So how can we do this, how we can compare data of the tables between different databases and generate data synchronization or incremental data deployment scripts?

You will see a dialog box like this, here you need to specify your source and target database (for which you need to set up a connection to your SQL Server instance). And next you can specify the data comparison options, for example do you want to list all the different records on the result screen or/and records which only exist in source or/and records which only exist in target or/and identical records between source and target. Click on Next to move ahead in the wizard. 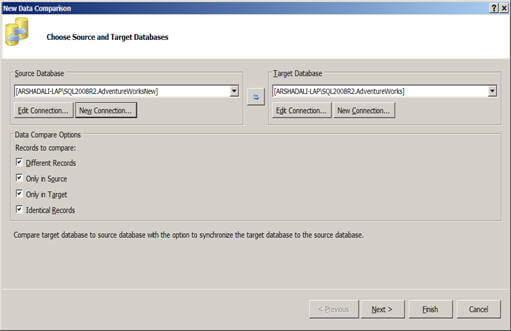 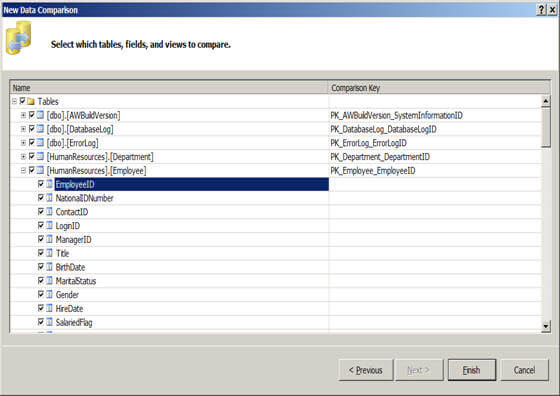 The moment you click on the Finish button in the above screen, it will start doing the data comparison for the selected objects and finally will show the comparison result. You will notice a new tool bar on top, some of the options of this new tool bar are: you can filter out the data comparison result as you can see in the image below, you can synchronize your target tables' data by writing updates to it, you can export your data synchronization/incremental update script to a file or to the editor. 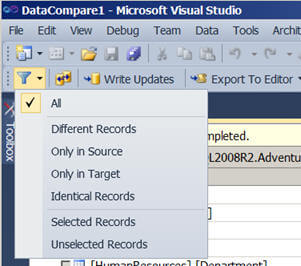 The next pane has four different tabs, if you notice in the "Different Records" tab the first column "Update" is a check box which you can select/unselect to consider that record in synchronization, next you will see the primary/unique key and then later on all the columns appear twice, the first appearance shows the column value from the source and the second appearance shows the column value from the target. This way you can easily see/compare the changes.

The bottom pane shows the target database data update script depending on the basis of the selection you used above. As you can see, I have two updates and two new records at the source and the scripts appear in this pane. If you are not able to see it or want to refresh it, click on the "Refresh Update Script" icon on the toolbar to display or to refresh the changes. 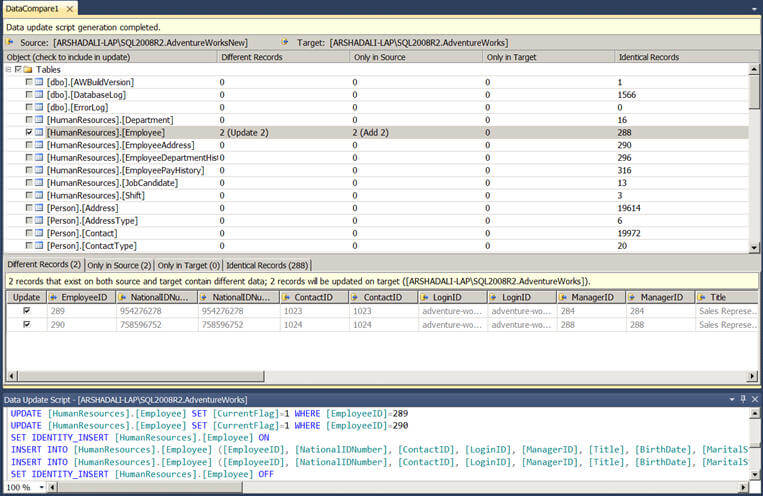 How to Compare Database Schema in SQL Server - Part 1