SQL Server Fragmentation What causes it (Part 3 of 9)

So, what causes it and how can I avoid it? Well, the answer varies for the different types of fragmentation, so let's use the same classifications of fragmentation as we did in the prior post and try to define the answers for each of them - since we're going to be referencing each type of fragmentation from the prior post, I won't be restating any of the "what is it" type information here, so if you need a reference on what it is, refer back to the 2nd post in the series:

A page split is what occurs to a database page when new data of some kind needs to fit a page, but there is not enough room on the page to accommodate all the data needed to be placed in the page. Page splits do NOT occur on a heap, only on indexes (clustered or non-clustered). What a page split is involves a complicated discussion, because it is a fairly complicated operation - for the sake of ease of description, think of it as a single page being split in half, with 1/2 of the rows on the page moving to a newly allocated page, and the other 1/2 of the rows remaining where they are. Also, though a page split can occur on any index page (root, intermediate, leaf), we'll limit our discussion here for now to splits of leaf pages of an index, since that is by far the most common, and also by far the causes the most impact.

2 operations that can commonly cause a page split include:

As you can deduce, a page split introduces multiple types of logical fragmentation at once: a) since the 2 pages involved in the page split operation hold only 1/2 the records as originally fit on a single page, the 2 pages are only about 50% full each, and b) since a new page had to be allocated to hold 1/2 the records, there's a very good chance that this new page is not physically contiguous with the logically ordered previous/next pages in the linked list. Therefore, you end up with pages that have a lower page density, are not contiguous, and hence not properly ordered. Not very desirable indeed!

An additional contributor to logical fragmentation is ironically something that is typically used to try and avoid it, but is many times used incorrectly - fill-factor. Setting a fill-factor for an index will limit how full a page is allowed to become as a percentage, thereby attempting to leave a certain amount of free-space in every page to ward-off eventual page-splits. Naturally, if this is used correctly and appropriately, it can be a very desirable feature - used incorrectly however, it can cause bloated page-counts and an overall inefficiency in that page density for given indexes. We'll discuss in a future post how you can use this to avoid page-splitting, when it should be used, when it should never be used, etc., but you also need to be aware that it must be used carefully and correctly to ensure you're not causing more harm than good. As mentioned in a previous post, page density is the only type of fragmentation that not only hurts performance on physical IO operations to/from disk, but also hurts performance within the data cache, or in memory, since a low page density leads to more pages,which leads to more pages required to store the same number of records.

Let's see what we can do to try and display logical fragmentation in a simple set of diagrams: 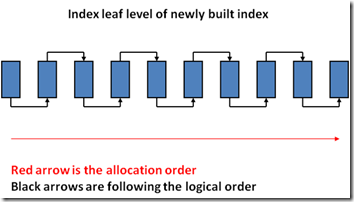 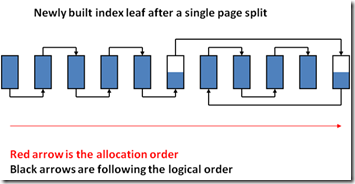 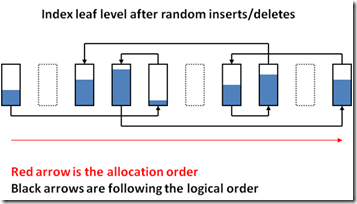 Images originally created by and courtesy of Paul Randal from SQLSkills.com from various presentations.

To again try and use a simple diagram to display what this might look like, let's try:

Image originally created by and courtesy of Paul Randal from SQLSkills.com from various presentations.

I'm not going to discuss how a single allocation request from SQL Server to the OS and beyond could potentially be scattered across a spindle(s) and hence be technically fragmented from the start - i.e., let's make the assumption for now that if SQL Server requests 50gb of new space from the OS/beyond for a new data file (or a growing file) that it will be granted a fully contiguous block of 50gb of space. Obviously, this is not the case, but to the extent possible, it would be granted as much contiguous space as is possible generally for the given spindle(s). A discussion on how this can cause file-level fragmentation could be quite involved. So, let's concentrate on what else can contribute to this type of fragmentation that we have a bit more control over:

To display this is a simple diagram, if a set of storage spindles could be described as contiguous from left-right as implied in the diagram below, and you assume each color-coded block is a section of data for each given file, file-level fragmentation might look like this:

Image originally created by and courtesy of Paul Randal from SQLSkills.com from various presentations.

Ok, that covers most of the major "what causes it" topics - next post we'll start talking about what can be done to avoid these different types of fragmentation...

SQL Server Fragmentation What it is, what types there are Part 2 of 9

SQL Server Fragmentation How to avoid it (Part 4 of 9)

SQL Server Fragmentation How to detect it (Part 6 of 9)

SQL Server Fragmentation How to address it (Part 8 of 9)

SQL Server Fragmentation What it is, what types there are Part 2 of 9

Chad Boyd is an Architect, Administrator and Developer with technologies such as SQL Server, .NET, and Windows Server.