Typically when working in Sales and Marketing Departments, every individual or group of individuals are given a Target for each year. All of these targets rolls up to the company's targets. Often companies will have one or more standard scorecards / dashboards to monitor the overall health of the organization based on a set of pre-defined KPIs /metrics. However, the individuals at the bottom or middle of the hierarchy need a way to review the detailed numbers for the current month, current quarter or current year to see how they are approaching the target. In this tip, we will see how to build a report which shows the cumulative sales amount for the current month, current quarter (QTD) and current year (YTD) in a single crosstab (tablix) report, which makes it easy to compare the data.

To address the problem stated above, we will be using one of the Running Aggregate functions in SSRS called "RunningValue".

This exercise assumes that, you have a basic knowledge of creating Tabular reports and working with Groups in SSRS.

For this demonstration, let us assume that, the target sales amount for an individual is set to $120,000 for the entire year. Which means, the individual, should reach $10,000 every month on an average to be able to achieve $120,000 at the end of the year. Let us prepare some sample data using the below query.

Note that, in the above query, the last column "TargetSales" is set to "120000/12" which gives us the TargetSales at the month level when the TargetSales for the year is set to $120,000. Now, let us create a report to address the requirement/problem statement.

Go to the Solution Explorer, Add a new Report and name it SSRSCumulativeAggregates.

Go to the Report Data window, Add a Dataset pointing to the Data Source dsSSRSDemo created in previous step and name it as dstSSRSDemo. Use the above query for this dataset.

Update the values in each of the cells in the table as per the below specification:

Also notice that, for QTD Actual and QTD Target columns, we have specified the scope as "rgrpQuarter" which is a group on the Quarter field since we want the aggregation (sum) to happen within this group and we want the aggregation to reset for each new instance of the group (Q1, Q2 etc.). Similarly, for the YTD Actual and YTD Target columns scope is specified as "rgrpYear".

Now, apply some basic formatting as per the below table.

Now preview the report and the report should look something like below. 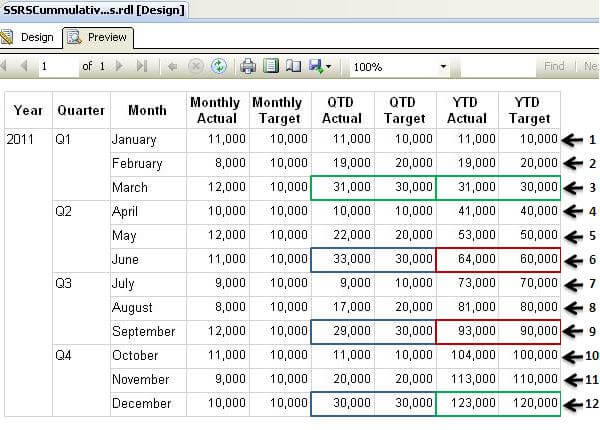 QTD Actual in the third row (2011-Q1-March) is the sum of values in the 1st, 2nd and 3rd rows of the Monthly Actual Column, which is the Actual Total Sales at the end of the 1st Quarter of 2011. Similarly, the values in the 6th, 9th, and 12th row under QTD Actual column represent the Actual Total Sales and the data under the QTD Target column represent the Target Total Sales at the end of 2nd, 3rd, and 4th quarter respectively. Also notice that, the values under QTD Actual and QTD Target columns get reset on the 4th, 7th, and 10th rows as those rows represent the beginning of the next quarter.

YTD Actual in the last row (2011-Q4-December) is the sum of all the values for January through December 2011, which is the Actual Total Sales at the end of year 2011.

Summary: At any given point in time, if you view the data in any of the rows, it shows the Actual and Target values for that particular month, along with the cumulative values for the quarter or year based on the month. This can help the users easily compare the Actual Values against the Target Values at any given point, to see how they are meeting the defined target and can help them plan accordingly.

The SSRS RunningValue Running Aggregate function makes it so easy to show the cumulative aggregates. In the above report, if you are interested in comparing the Average Actual Sales against Average Target Sales, then you can replace "Sum" with "Avg" in the RunningValue function in the cells D3, D4, D5, and D6.