Microsoft introduced the TRY...CATCH construct in SQL Server 2005 which helped database developers to effectively handle errors within their T-SQL code. Using the CATCH block a developer could easily write the error handling logic that needs to be executed whenever a problem occurs within the TRY block. Prior to the introduction of TRY...CATCH construct developers had to use the @@ERROR in-built system function to check for error conditions after every operation. In the previous versions of SQL Server you had to use RAISERROR statement to show an error message. However, a RAISERROR requires a user defined message to be added to sys.messages table before you use it to raise an error.

Let us go through a simple example to demonstrate the THROW statement in SQL Server 2012. 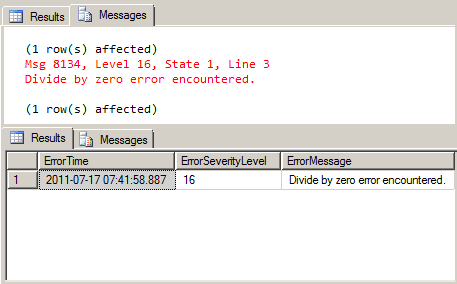 In the above snippet you could see that in the code CATCH block the error information is instered into a table and the error message is re-thrown to the client application.

Using the NOWAIT option with the SQL Server RAISERROR statement