What configuration files are included with SSRS and how should I modify them?

Most often when using Report Server, the Report Services Configuration Manager is used to make setting changes; however there are times when making direct modification to the configuration files is either the only way or the most efficient way to persist values across multiple servers on a Report Server farm. Of course, with any such privilege comes a very big responsibility; as such, please be warned that directly modifying the configuration files can result in either settings resorting to default values or the Report Server erroring out completely. In order to prevent such issues, it is imperative to check the range of valid values for any item being changed. 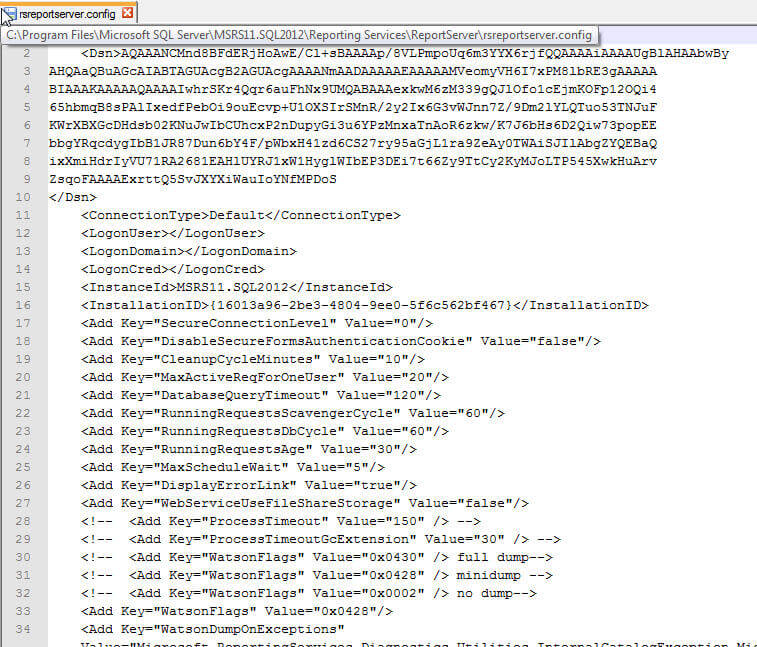 You will quickly note this file (and the other two files we will discuss) are in XML format. Be sure to use a plain text editor to make any changes to the files as other tools may add or introduce extraneous characters into the XML file. Also, even though you can make changes to most any field, there are some changes that will immediately cause issues and require the field to be updated via specific tool; these type of fields include those that are encrypted such as the DSN is in the above screen print.

Other fields, such as the MaxActiveReqForOneUse is not encrypted and is available in plain text. This value could be changed with care. Once you do make a change and depending on the value changed, the change will take effect most likely the next time the application domain recycles or when the SSRS Service restarts.  Also be sure to note that the values used in the config file are case sensitive and in some instances, in order to impact some settings, several lines of keys, values, or attributes may need to be added.

One common change that is often made to the RSReportServer.config file is to add or modify the rendering information; these changes will allow for alternate rendering extensions to be added, such as, a pdf in landscape format. Adding the below XML to the Render section of the config file adds a second pdf export option to SSRS. 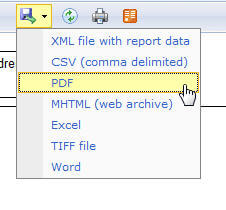 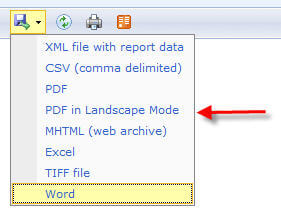 However, if the updates made to the file are done incorrectly, the following screen print displays one of the errors which could result when attempting to restart the Report Server Service (more on this item later in the tip). In some instances, when an incorrect value is used, the report server will actually function, however, a "default" value is used. Unfortunately, other times the Report Server will not start at all. Either situation is not beneficial and as such care must be taken when making these manual updates.

Another normal adjustment made manually pertains to the adjusting the various memory and recycle thresholds used by Reporting Service. 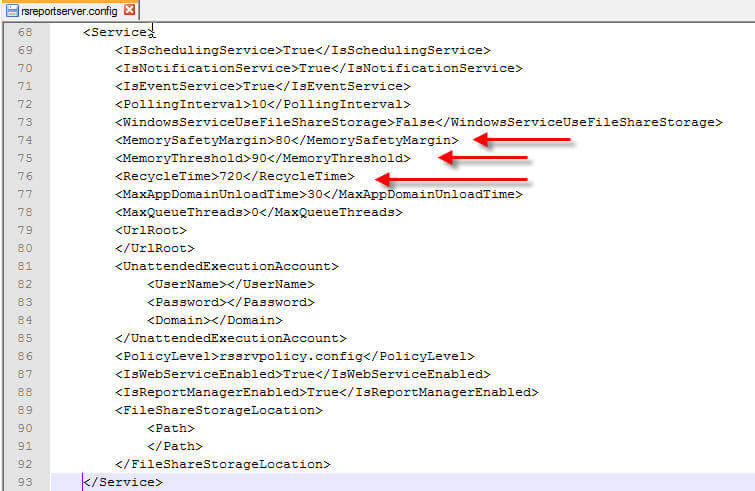 The following link covers the details about making setting changes to the memory:  http://technet.microsoft.com/en-us/library/ms159206.aspx This second link, http://www.mssqltips.com/sqlservertip/2735/prevent-sql-server-reporting-services-slow-startup/ explains the RecycleTime setting. This second setting can alleviate slow start up time after the report server has been idle for a long period of time such as overnight.

The RSReportServer.config file is the most likely configuration file to be changed by an SSRS administrator; however nearly as likely to be updated is the ReportingServicesService.exe.config, especially when troubleshooting.

This file controls the settings for the log and trace files generated by Reporting Services. You can set the name prefixes used by log files along with the level of tracing wanted. In particular, the DefaultTraceSwitch property, as seen in the below screen print, allows you to adjust the level of logging that SSRS uses; 0 is no tracing whereas 4 is full verbose tracing. By default, the trace level is set to 3; care should be taken when altering this setting to 4, due to the amount of data which potentially could be written which would in turn slow SSRS. 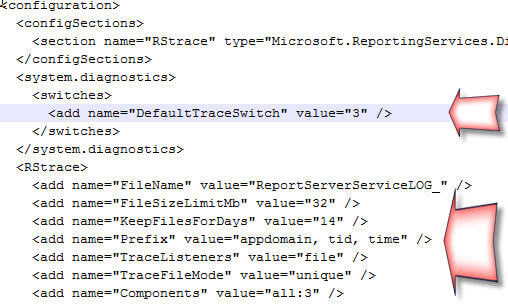 Furthermore, reviewing the remaining parts of the above screen print, the RSTrace section allows you to manipulate the:

The remaining RSTrace tags should not be changed. As you can see in the below screen print, after making the change for the log file name prefix and restarting the SSRS service, we now have a new set of files. The screen print also displays the first several lines of the trace file.

As an example of using the ReportingServicesService.exe.config settings as a troubleshooting tool, I purposely added an extra "/" to the RSReportServer.config file and then attempted to restart the SSRS service. The Windows services displays the restart error illustrated earlier and repeated below. Of course this message is not the least bit helpful other than knowing that the service will not restart. On the other hand, by turning on logging in the ReportingServicesService.exe.config file, we can see in the second illustration, that we have an extra "/" in the configuration file. Thus, if you are having trouble starting SSRS or are getting an error when navigating to the SSRS site, turning on tracing would be an excellent first step in trouble shooting the error.

The third configuration file, RSReportDesigner.config, has a more distinct purpose than the previous two discussed config files. This file maintains the setting for processing and rendering of SSRS extensions while designing and previewing a report in the designer; thus, as opposed to the other two files which are integral parts of the actual report server applications, this file affects only how the report designer (SQL Server Data Tool or SSDT for SQL 2012) runs, processes, and renders a report request. Furthermore, in contrast to the other two configuration files discussed, whose location is within the SQL Server file directories, this configuration file resides within the Visual Studio directory structure. In the below screen print, first, an additional pdf render option is added, and second, the Word export visibility option is set to false.

This change is illustrated in below results.

One other helpful setting in the designer config file that is often changes center around the CacheDatafForPreview option; this value determines whether during report preview the design tool (SSDT) caches data files for later use or does not cache these files.

Adjusting this setting to false means that that no SSRS data cache files (xxx.rdl.data files) will be generated. Depending on the size of your datasets, this change may be advantageous; of course the advantage of modifying this setting is also dependent on whether you are updating the data and / or changing your datasets and whether you want to see the updated data or not.

How To Enable Caching in SQL Server Reporting Services

SQL Server Reporting Services is not compatible with Internet Explorer 11