Your boss gives you a text file to import into a SQL Server database. It looks like a piece of cake, but you suddenly realize that the text file is in EBCDIC format. In this tip I will show you how to proceed to convert EBCDIC data on the fly in a Data Flow Task with a Script Transformation in SQL Server Integration Services.

Importing text files with SQL Server Integration Services can become complicated if you need to deal with mainframe sources. Even when SSIS allows us to select the code page for the file to import sometimes it is not that easy. For example, when you have binary fields on a text file, like COBOL's COMP fields. In short, the whole battery of tools Integration Services offers to us, sometimes it is not enough. But for those cases, SSIS offers us the possibility to extend its functionality with custom .NET code. From that point on, the limit is only your imagination.

There are different ways to handle decimal values on computers systems and each platform uses its own way based on its operating system and hardware. Mainframe uses the Binary Coded Decimal (BCD) encoding for decimal numbers. It consists of representing a decimal digit with a fixed number of bits, usually 8 for uncompressed numbers and 4 for compressed or packed ones. In this tip, I will refer to the uncompressed or zoned numbers.

If the field is defined as unsigned, like a COBOL PIC 9999, it is stored in plain EBCDIC format. For example, the number 1234 will be stored as 0xF1 0xF2 0xF3 0xF4, the hexadecimal codes for numbers 1, 2, 3 and 4 in the EBCDIC charset respectively. The problem arises if we are dealing with signed decimal numbers, like COBOL PIC S9999, in which the sign is encoded in the high order number of the first byte as a hexadecimal C for positive numbers and a hexadecimal D for negative. Some people say that back in the day of punched cards C was for credit and D for debit. So, according to the EBCDIC character map, the signed position of the field will display as a character value of "A-I" for positive numbers and "J-R" for negative numbers. Also the number zero will be represented as a "{" and "}", the character codes of 0xC0 and 0xD0 respectively.

The EBCDIC zoned number can be converted to an ASCII zoned number. In that case, the numbers are in the hex range of 0x30 to 0x39, the ASCII representation for numbers 0 to 9 and the sign digit is encoded as X'3n' for positive numbers and X'7n' for negatives. To avoid confusion let's call this variant as Modified Zoned. On the next image you will see an example of both a positive and negative number representation. 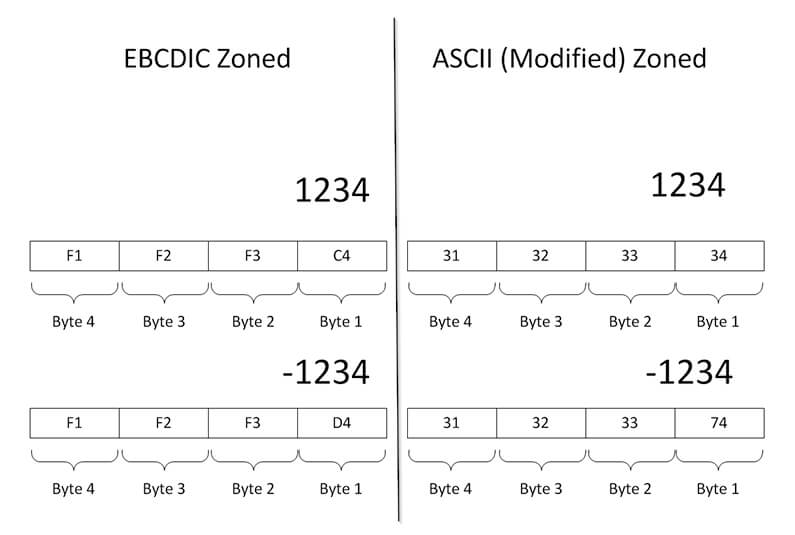 But it doesn't end here. If the file is transmitted over FTP, it could be done in two different modes; binary or ASCII. Usually text files are transferred in ASCII mode. The main difference is that ASCII mode translates the data based on its character value, for instance, if we send the character "A" with EBCDIC code 0xC1, on the other side we will receive the character "A" with ASCII code 0x41. Notice that the binary values differ between the source and the destination. The next table will show us the possible values we will get for the signed digits.

First we are going to create a sample database.

We need some sample data in a text file to load into our previously created table.From this link you can download a sample text file.

Next is an example of what you will see in a COBOL Copy File (a file that contains the record definition) for the file of the previous step. I added a brief description about the data types just in case you are not familiar with Cobol syntax.

A suitable definition for a table to load this file is next.

The next step is to create a SSIS project and add a Data Flow task, a Flat File Connection to the file created in the previous step and an OLEDB connection to our sample database as shown in the next image. 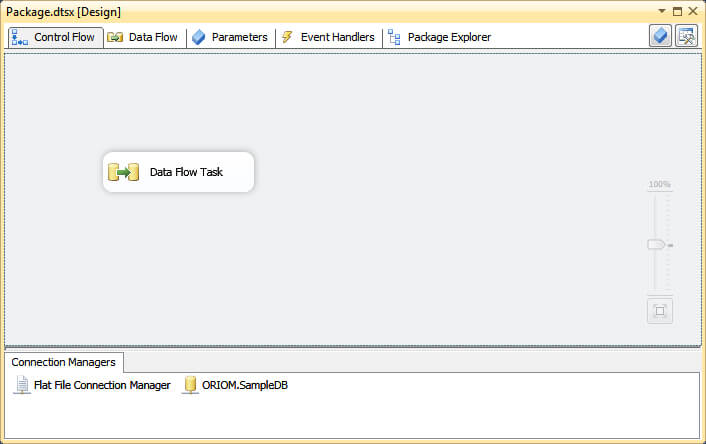 Then set up the flat file connection with a fixed width format, an ANSI code page and select {CR}{LF} as the row delimiter as shown below. 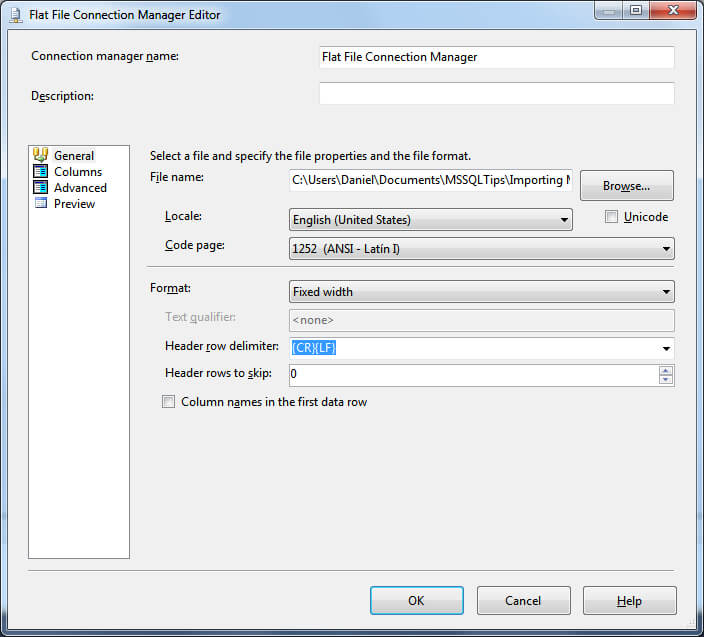 In the Columns view we see our file as rubbish data because it's in EBCDIC format. Also notice that the numeric fields end with a letter. 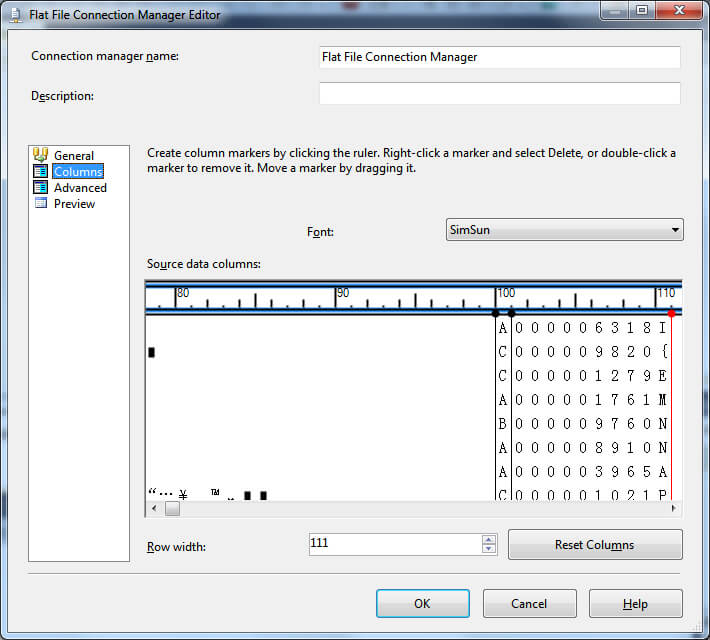 Because of this and for simplicity, it's better for us to use the Advanced view to set up the layout of our text file. According to the file's record definition we will configure columns Name and Address with an input and output of 50 and a Data Type of String.  We must also set the TextQualified option to False.

For the Category and Balance fields we need to select String as the Data Type; and 1 and 10 for the lengths respectively. 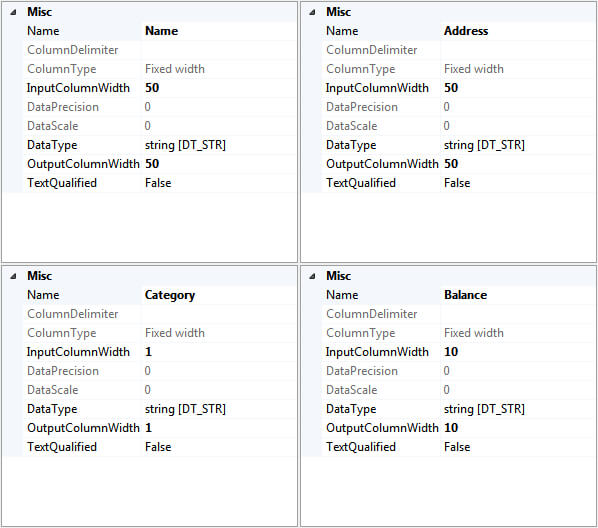 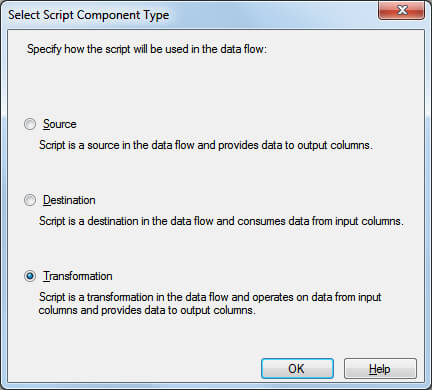 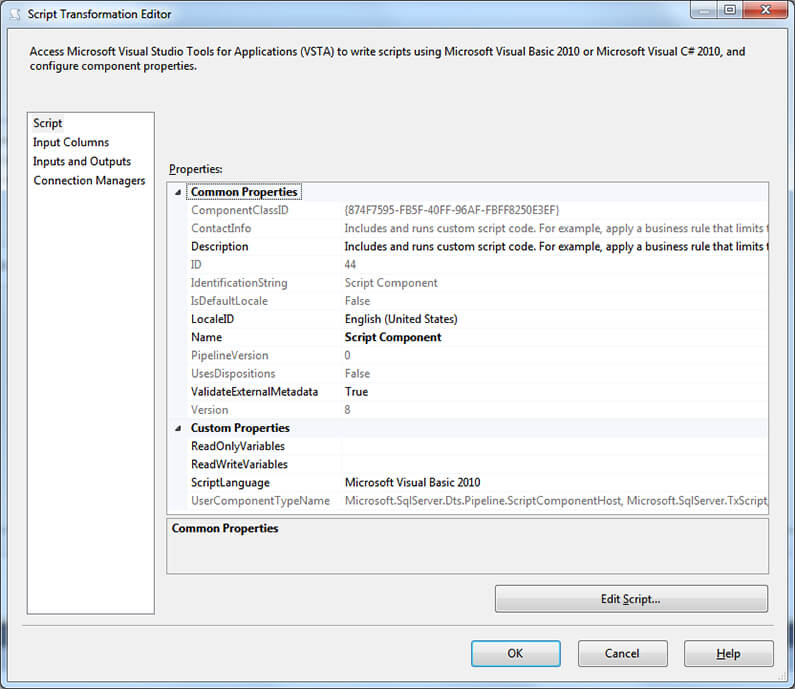 The next step is to setup the Inputs and Outputs tab. We have to add four columns into the Output folder tree; those columns will be where we will return the transformed data to be inserted into our database. 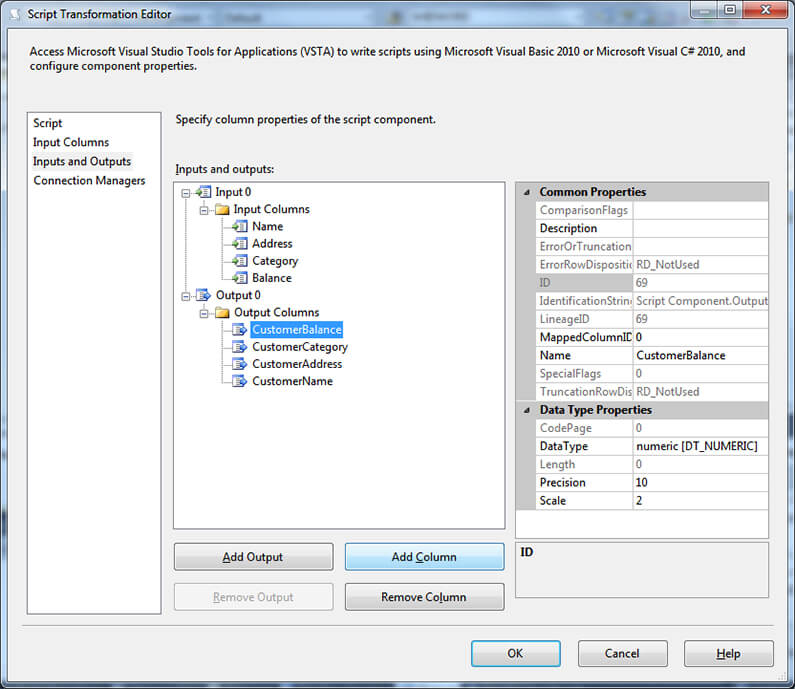 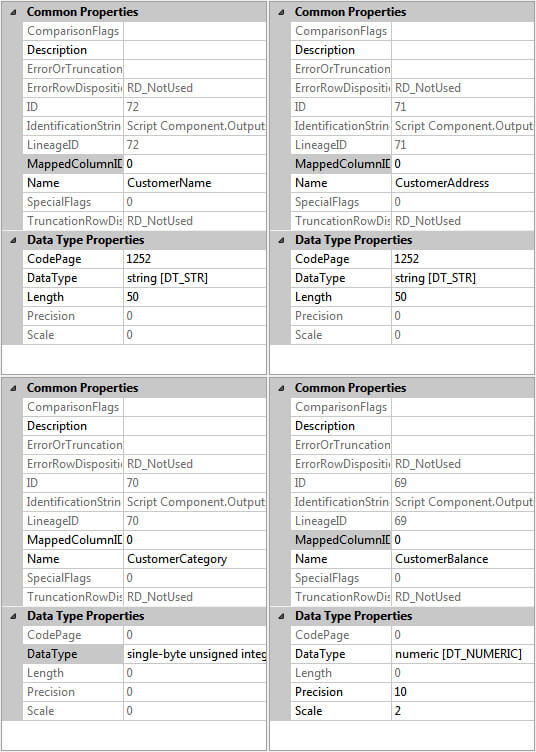 Now, on the Script Tab, press the Edit Script button. Another instance of Visual Studio will arise in which we will paste the next script code.

How the Script Works

When the Visual Studio Editor opens, it gives us a Class Template to add our code. This template defines a method called Input0_ProcessInputRow that is executed once for every row. The method receives an object variable row of type Input0Buffer that includes our input and output columns as methods. From now on, it's only matter of assigning a method to the corresponding converted value, like on the next image. 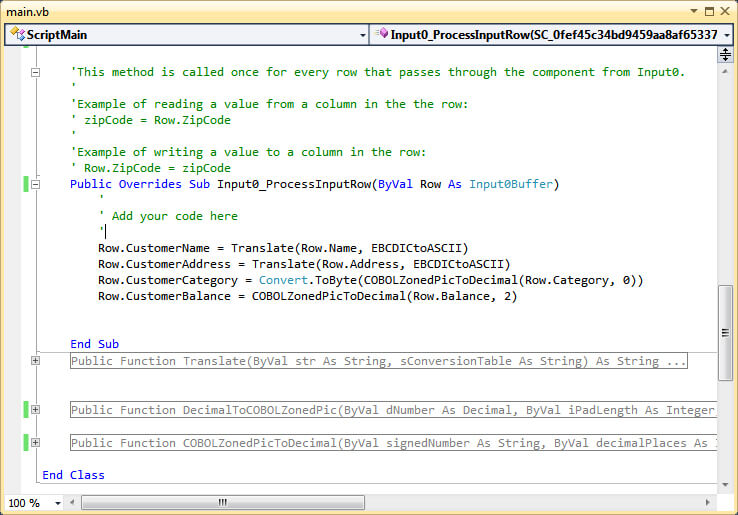 To convert from EBCDIC to ASCII, I created a function that receives as parameters a translation table and the value to be translated. It works by replacing a character with its corresponding position in the table, much like a hash function does to find a match. In fact it is a collision free hash function.

After executing the package you can perform a SELECT on the destination table and you will see that 1000 rows have been loaded into our sample table. 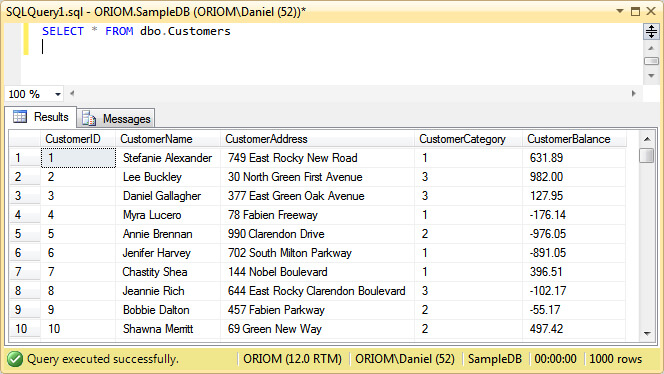