In my daily work as a SQL Server DBA, there are many times I want to do things in parallel, for example:

Is there an easy way for me to do the above mentioned SQL Server DBA tasks in parallel, so I can save as much time as possible?

Starting with PowerShell (PS here after) V3, there is a new feature called WorkFlow, which can execute PS cmdlets in parallel. So in this tip, I will first use a simple example to demonstrate how the PS workflow feature will help DBAs in reducing administration time, and later I will come up with two practical solutions about doing backups in parallel or running a script in parallel against multiple SQL Server instances.

This example will run this T-SQL statement five times, which is just a delay of 30 seconds:

In theory, if we run this T-SQL statement in sequence, it will take 30 X 5 = 150 seconds, but if we run the code in parallel, it should take only 30 seconds. So here is the code to verify this concept (i.e. run in parallel via PS):

When I run this PS script in my PS IDE, the final result is about 34 seconds as shown below: 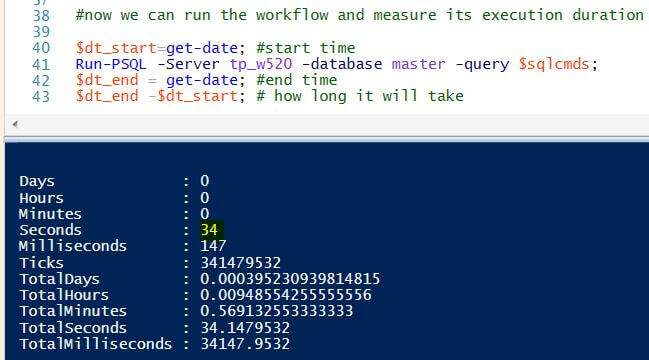 Actually, when I was running the PS script, I opened an SSMS window, and ran the T-SQL code to check the time for the running code as shown below: 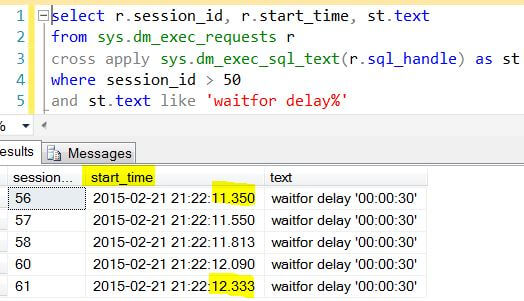 You can see that the 5 sessions start almost at the same time (there is only a 1 second difference between the first and last session start time).

Running same T-SQL code against multiple SQL Server instances is also a common task for DBAs. So the following code will demonstrate how to do this in parallel:

Running T-SQL scripts in parallel is a great way to boost DBA work efficiency and productivity. With the use of PowerShell V3+, parallel execution becomes available and is easy to implement.

I hope this tip will broaden your choices when designing / architecting your DBA tasks / tools.

One note, in PS V3, the parallel execution has a fixed hard limit of 5 concurrent threads when a workflow runs. I have tested lots of scenarios running T-SQL code, either via invoke-sqlcmd or by SMO methods, it seems each thread (among the 5 concurrent threads) in a workflow does not really start at the same time and can have 0.1 to 9+ seconds difference in starting time. This means the parallel execution is more useful when T-SQL scripts run a long time. If each script runs 0.01 seconds (like creating tables, stored procedures, etc.), it really does not matter that much whether you run scripts in parallel or in sequence.

Use the code above and test in your own environment. I have tested the PS script in my various test environments where PS V3/V4, Windows 7, Windows 2012 R2 or Windows 2008 R2 installed. Also make sure to use SQL Server 2012+ with SQL PS module is installed on the host computer where you will run the PS script.

You may also check the following links to learn more about PS workflow parallel activity behavior, or try coming up with a new method to solve an old issue.