If a SQL Server Reporting Services report has many columns with text descriptions in a horizontal direction then those headings will need significant space in the report. There are situations where report data will not fit in a single page and the users will have to scroll horizontally to see the data. Unfortunately, this is very irritating and users may ask you to modify the report in such a way that report data can fit in a single page. How can we modify the report and what approach you should follow in this case?

Proper orientation of a Textbox saves a lot of space in a report layout; if a report has 10 columns with text descriptions in a horizontal direction then it will take more space in the report as compared to the same report having those columns in a vertical direction.

This tip assumes that you have previous real world work experience building a simple SSRS Report. In this tip I will describes how to set the orientation of Textbox in a report. To demonstrate the solution, I will use AdventureworksDW2008R2 sample database for SQL Server and SQL Server 2012 Reporting Services.

Let's create a sample report for demo purposes. Please change the report name to Change_TextBox_Orientation. You can refer to the below image. 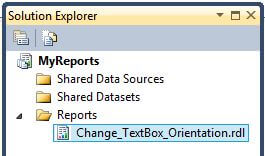 I have already created data source connection to the AdventureworksDW2008R2 sample database and let's create the below dataset for this sample report.

Main Dataset: This dataset will be used for the report body and it returns 9 fields.

After creating the Main dataset Report, the Data Pane looks like the below image. 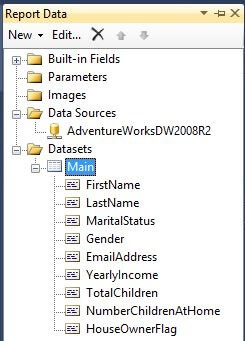 Let's add a Tablix for data viewing purposes. I will pull all 9 data fields from Main dataset into the Tablix. After adding the Tablix, the sample report looks like the below image. 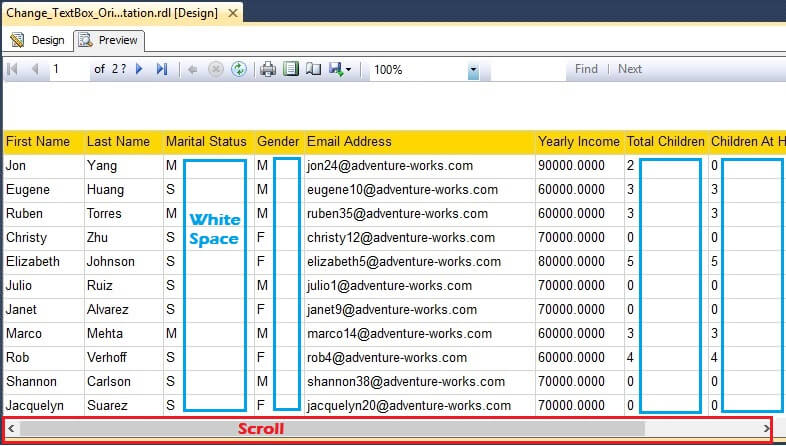 Press the F4 key to get the property window. 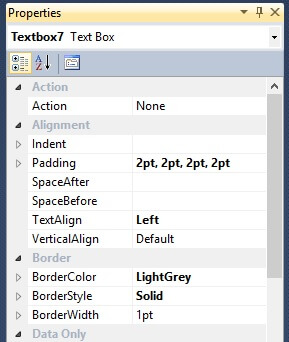 Go to the WritingMode Property and select the Rotate270 option, you can refer to the below image.

After the above changes, you can see the column header for Marital Status is shown with the text from bottom to top. Please adjust the width and height of the Textbox to accommodate the rotated text. 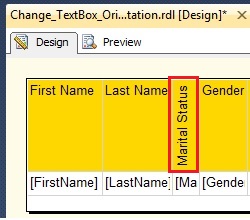 Now we will also see how text looks in a vertical orientation. To change the Textbox orientation to vertical, select the Gender column header Textbox and press the F4 key. In the properties window set the WritingMode property to Vertical. Please adjust the width and height of the Textbox to accommodate the rotated text. You can see from the below image the column header for Gender is showing text from top to bottom, but it is difficult to read the text in the vertical direction so the Rotate270 orientation is preferable. 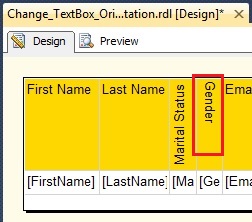 Let's change the Textbox orientation for Marital Status, Gender, Total Children, Children At Home and House Owner Flag column header to Rotate270. You can also change the text alignment for the TextAlign property. After the changes my report looks like the below image.

We have completed all the necessary changes, now let's preview the report. As you can see from the below image, all 9 columns fit into a single page and the users do not need to scroll the report horizontally. 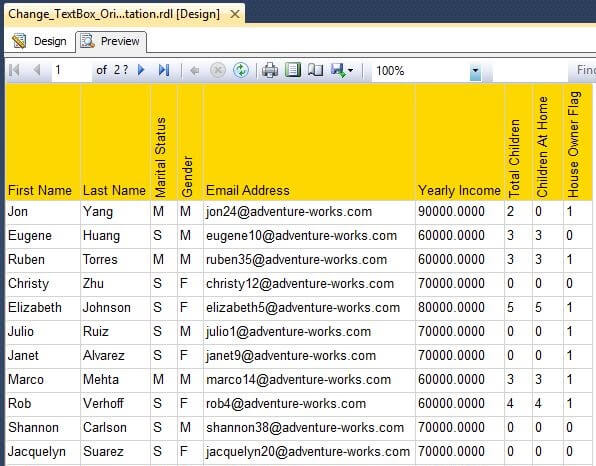 This approach is useful in the following conditions:

Ghanesh Prasad leads a team in Microsoft Business Intelligence and has over 5 years of experience working with SQL Server.