I need to merge two similar tables from different SQL Server databases and also merge the child tables that are connected by foreign key relationships. The parent tables use an identity for their primary key, so I need to track and maintain the relationships when I copy the data over. How can I do this, preferably in a set-based fashion?

It is common in databases to use a surrogate key to identify each row. Using a surrogate key instead of a natural key has both advantages and disadvantages. The two most common surrogate keys in SQL Server are its uniqueidentifier and IDENTITY. SQL Servers unique identifiers are globally unique, but IDENTITY fields are obviously not unique. So, if you try to merge two tables that use identities, the identity value of many of the rows will change. This is not a problem if there is nothing with a persistent dependence on those identity values, but foreign keys create a persistent dependence. So, if there is a child table with foreign keys, when it is merged it needs to still point to the correct row in the merged parent table even though the identity will change.

As with many things in SQL Server, this is clearer with an example. So, say we have two separate stores that each maintain their own customer tables, using an identity as a primary key. A customer may have more than one phone number, so phone numbers are tracked in a separate child table linked by a foreign key. In a simple form, this could look like:

Now say we have a second location that uses the same database structure and same applications, but it has different data. For instance, its data might look like:

Eventually, there may be a need to merge this data. Trying to do a direct insert like: 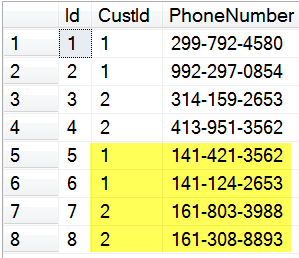 So, we need to keep track of the old and new customer IDs to be able to properly move the data from the phoneNumbers table. We could do this by writing a script that copies the rows over one at a time and retrieves the new identity with @@IDENTITY or SCOPE_IDENTITY. But those functions can interact in complex ways with triggers and replication, not to mention that doing it that way means handling the data row-by-agonizing-row which is less than ideal. Using the OUTPUT clause with the insert statement would seem ideal, but that does not give access to the source table so we do not have an easy way to match the newly inserted IDs with the original ID. Fortunately, in SQL Server 2008 and later, the output clause with the MERGE statement allows access to the newly inserted rows as well as the source rows. So, the code to fully merge the tables would look like: 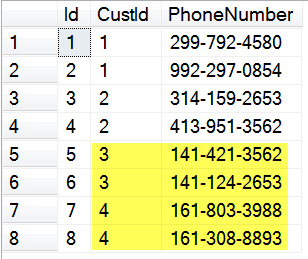 There are a few things to note here. In the merge statement, the 1 != 1 is there to ensure that the not matched condition is always met and it performs the insert for all rows. It then uses the output clause, which for merge has access to the source tables as well as the inserted virtual table, to send the new and old IDs to a table variable. Note that the merge statement, unlike most statements for T-SQL, must be terminated with a semicolon. After performing the merge, it uses that table variable to join with the child table to do the insert and provide the new ID. When doing the insert, you need to use a left or right join as appropriate to make sure all the rows from the child table are matched. If you do an inner join, some rows may be skipped. Also, the match with the table variable needs to be on the foreign key row (CustId in this example) and not on the primary key of the child table. I have made both of those mistakes at various times.

At least for later versions of SQL Server, the MERGE command with its versatile output clause provides a convenient way to move data even when identities that are tied to foreign keys are involved.