Use of images is a great way of making a site more attractive for users. But uploading them into picture libraries through the browser is tedious, and SharePoint doesn't give you any way to crop and compress them. 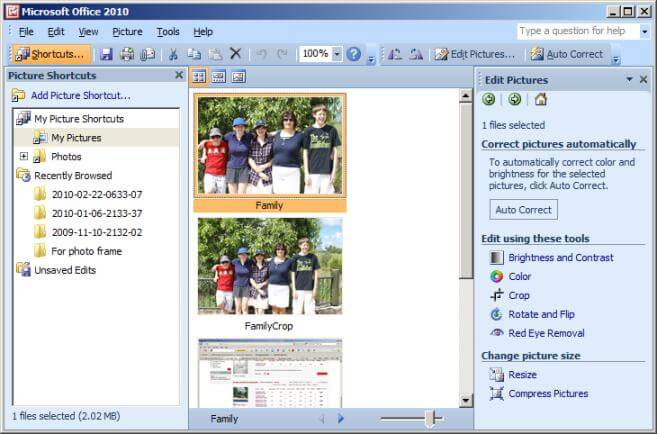 The Microsoft Office Picture Manager is a great tool for adjusting and compressing pictures so that web pages load faster. It is capable of converting pictures between different formats (GIF, PNG, JPEG etc), re-sizing, cropping, flipping, enhancing contrast, removing red-eye and so on. It can even perform many of these operations on batches of pictures in one operation.

Many users are not even aware it exists, because of the way it is buried in the Start menu. Even Microsoft themselves seem to under-appreciate it, because it has escaped being "ribbonized" in Office 2007 or even 2010. It still looks exactly the same as it did in Office 2003 except that the words "Picture Manager" no longer appear in the application title bar. At least it seems to have escaped the fate of the confusingly similar-sounding "Document Imaging" which has been completely removed in 2010.

Even people who know about Picture Manager probably don't realize that it can be used to work directly with SharePoint picture libraries. This is a great time saver compared with editing pictures on your computer and then uploading them to SharePoint.

To do this, in your SharePoint site, create a new picture library, or browse to an existing one. Copy the URL in the browser address bar to the clipboard. 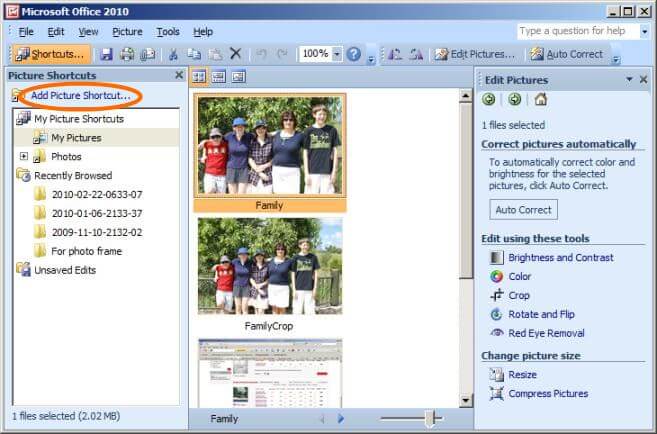 You can then directly view the pictures individually, or as thumbnails, or in a filmstrip. You can also directly edit them using all the tools listed earlier, and more. For example, here we re-color, crop and compress an image to achieve an image that gives a desired effect, and will load quickly. 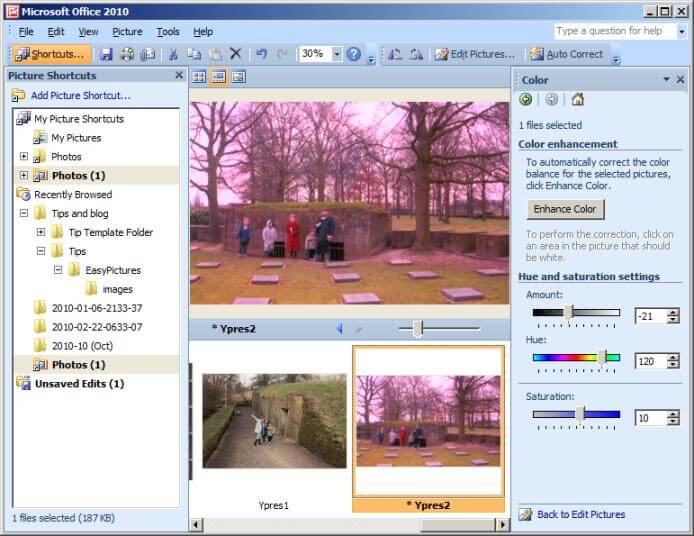 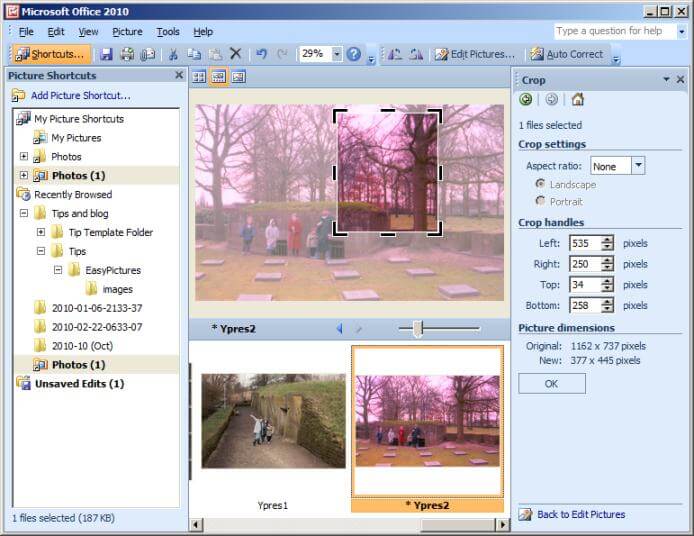 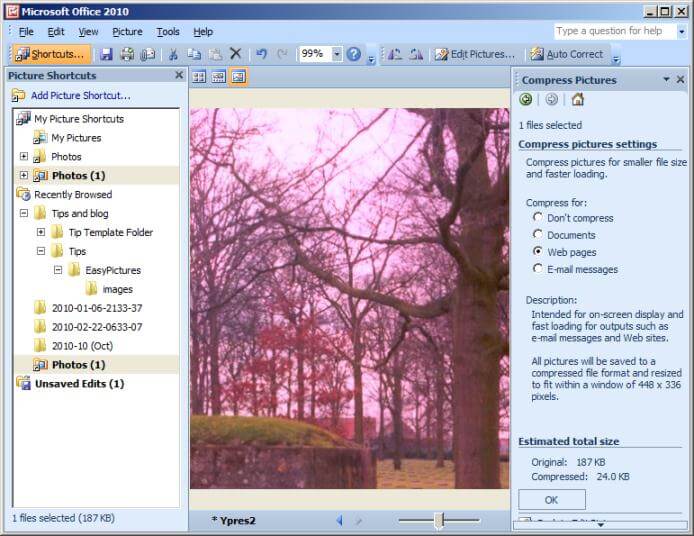 After editing the picture, you can see that its name is bold with an asterisk, to show that it has unsaved edits. Be careful, because if you click OK at this point you will overwrite the original picture with the changes. If you want to preserve the original, either make a copy of it before starting the editing process, or at this point select Export from the dropdown at the top of the task pane at the right, export a copy of the picture as edited to a new file, then select Edit > Discard Changes to preserve the original.

The quick way to get pictures into SharePoint

One of the neat things about the Picture Manager is that you can paste pictures into it from any Windows application, and it will automatically create a new picture file containing the picture. For example, you can press Alt Printscreen to get a screenshot, then press Ctrl V in Picture Manager to create a bitmap file of the screenshot. You could then use its tools to crop the screenshot and compress it into JPEG.

This makes it a great way of grabbing images out of other web pages into your SharePoint site (as long as you observe appropriate copyright, of course!). Browse the page containing the image, right click it and select Copy. 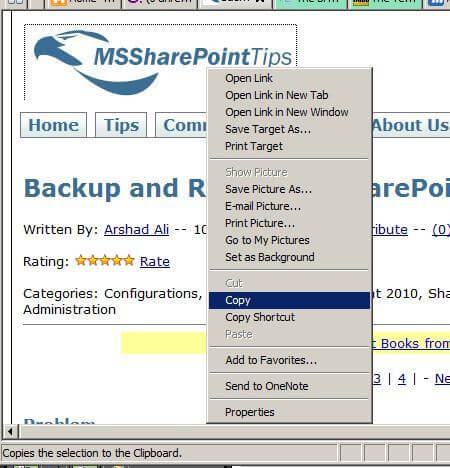 Then go to Picture Manager, select your site picture library on the left, then press Ctrl V. Voila, you have the picture from the web in your site! 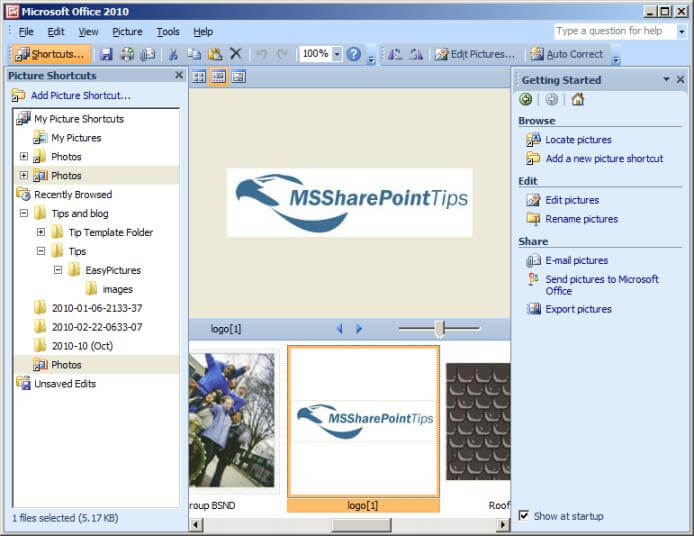 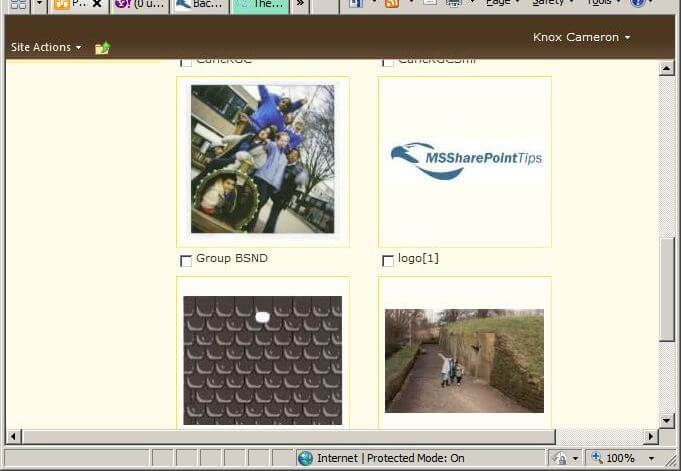 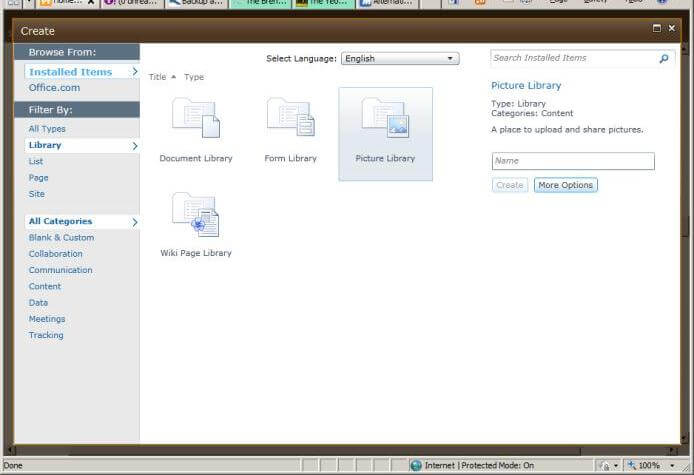