JSON (JavaScript Object Notation) is a data interchange format that has become popular when moving data between systems. There has not been any native support in SQL Server to output the data in this format, so other workarounds need to be put in place. This has changed with SQL Server 2016.

JSON stands for JavaScript Object Notation. It was created by Douglas Crockford, a famous computer programmer and entrepreneur.

JSON is replacing XML in many places to interchange data. It was designed first for JavaScript, but now it is an independent language. There are no plans to discontinue XML support in SQL Server, but adding JSON in SQL Server provides an alternative.

In order to start, open SSMS and run the following query (make sure you are using SQL 2016 CTP 2.2 or later):

1. Let's start with a simple query in T-SQL without JSON.

Now compare the results with the query using JSON AUTO.

Note that in the query editor JSON is detected as an error, but the query still runs. This will be fixed in future releases. 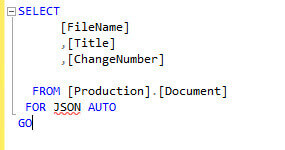 Check the results of the query with the JSON AUTO clause:

As you can see, the result has the following syntax:

Another alternative is JSON PATH. AUTO is used to format the JSON results and uses the default order. If you are familiar with XML in SQL Server, you will notice that it is very similar. PATH offers more control in the format of the files.

Here is the output:

If you are not using tables, PATH is your only option. The below example will fail:

If you run the above query, you will receive the following error message:

Msg 13600, Level 16, State 1, Line 2 FOR JSON AUTO requires at least one table for generating JSON objects. Use FOR JSON PATH or add a FROM clause with a table name.

However, if you run the same query with the PATH clause, it will work successfully.

The results displayed with be the following:

You can also use the ROOT option as shown below.

The result are as follows:

SQL Server 2016 includes native support for JSON, but this is still in the works and we displayed what is currently supported.

The OPENJSON option is not included in CTP2.2, but it is planned in CTP3 and later versions.

For more information about JSON in SQL Server, check these links: