You have learned about the importance of statistics in a SQL Server database, but you don’t understand it very well. Furthermore, when you learn that the DBCC SHOW_STATISTICS command gives you information about statistics, you execute it and its output adds more confusion. In this tip I will explain how to interpret the outputs of the SQL Server DBCC SHOW_STATISTICS command.

One of the most misunderstood concepts of Database Administration is statistics and its interpretation. For those of you who don’t know much about the importance of statistics, just to give you an idea, they are a determining factor when the database engine needs to build an execution plan, even more than indexes. In fact, SQL Server will use the available statistics associated with an index to decide if its usage is beneficial. That fact usually causes beginners to confuse both concepts by thinking that statistics are a part of indexes. The relationship between indexes and statistics is not symmetric; every index has statistics associated with it, but not all statistics have a corresponding index.

DBCC SHOW_STATISTICS shows the actual status for a given statistic on a table or indexed view. The output of this command is composed of three items; the statistic header, the density vector and the histogram. In this tip we will dig into these concepts, but first I will show you the most basic syntax and its output. 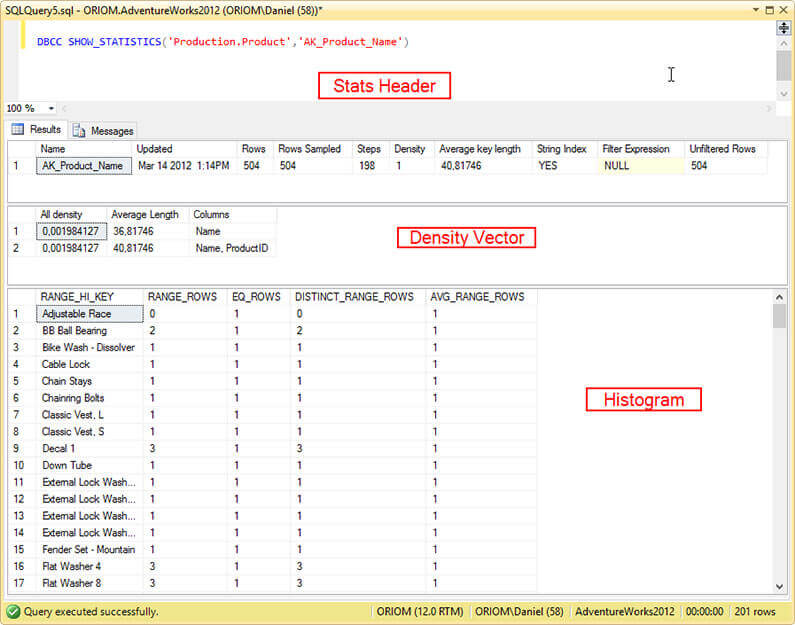 This item shows the basic information about a statistics.

Let’s see this with an example. First create a sample database.

Now we create a very simple table consisting on one identity column “ID” that we define as a Primary Key “PK”and a varchar column “Name” and set up an index “IX_Name” on it.

The next step inserts 2000 rows to the table and updates its statistics. Notice that the rows contain the same value for the column “Name”.

We can see now the statistics on “PK”.

As you can see on the next image the Density Vector has a density very close to zero because all values of ID column are different. 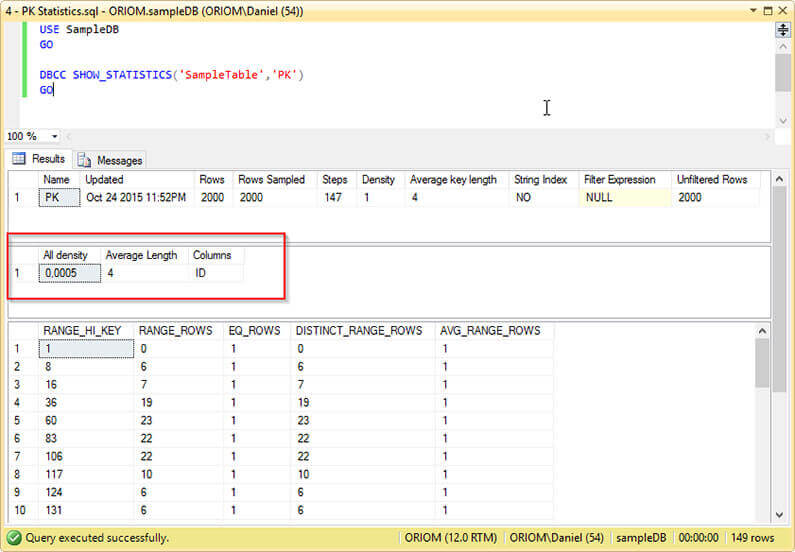 Let’s do the same, but with the statistics on “IX_Name”.

The next image shows that the Density Vector for the Name column is equal to 1 because all values are the same. 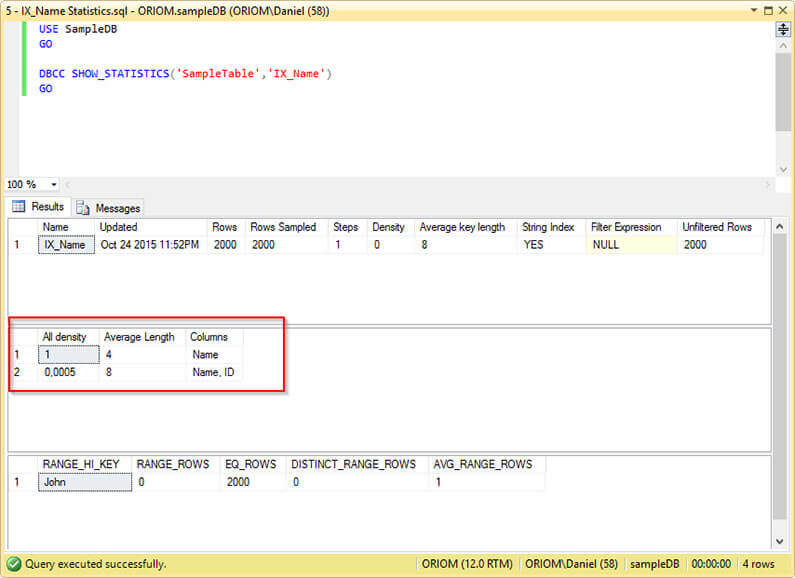 Something you can do with the histogram is to create an Excel graphic, mostly for learning purposes. The next image is a graphic of the data distribution on the Products table from the Northwind database made with the histogram of the CategoriesProducts statistics. The x axis represents a value for column CategoryID of Northwind’s Products table and the y axis is the number of occurrences of that value. 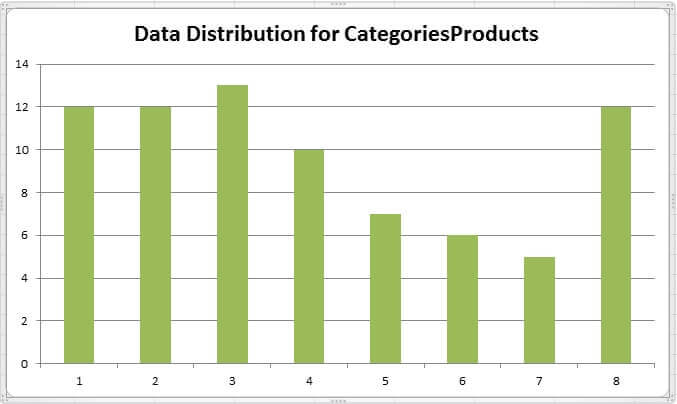 Effects of Statistics on Plan Generation

Let’s do a simple test on the AdventureWorks database. Consider the Person.Person table and the IX_Person_LastName_FirstName_MiddleName statistics histogram. 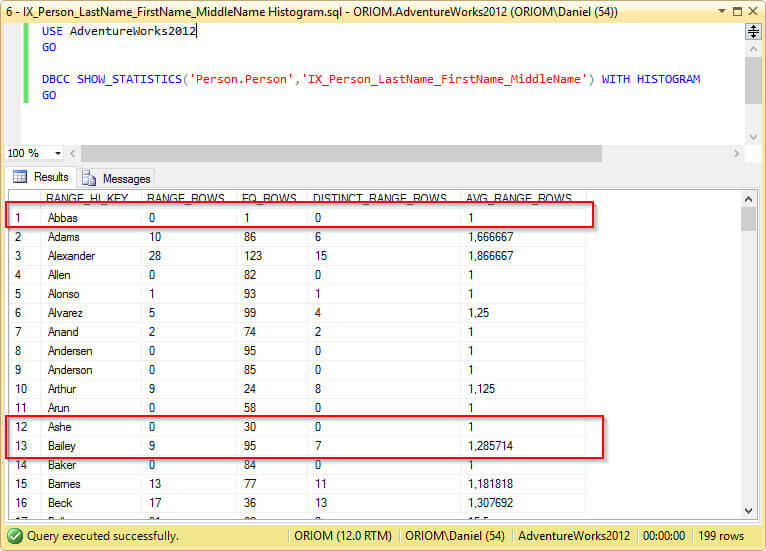 Just like I did with the Northwind’s Products table I created a graphic of the data distribution. Also I marked in black the interval of values we are working with. 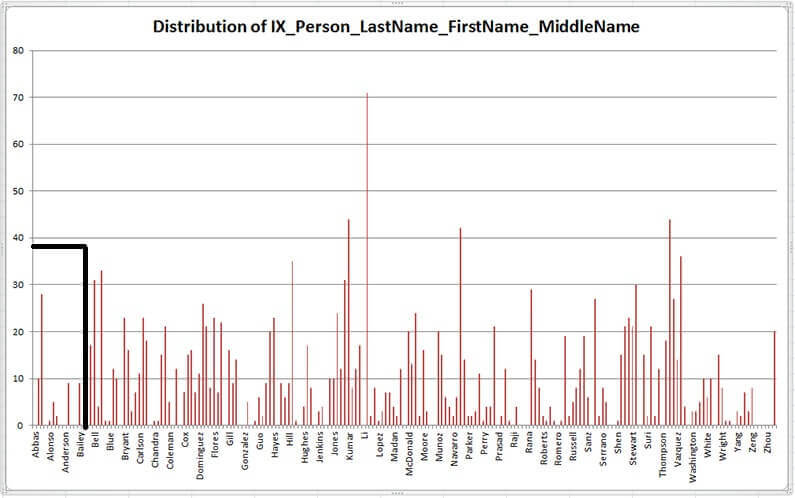 Now we are going to execute a simple select statement on the table to list the persons whose last name is between the range “Abbas” and “Ashe”, which is between steps 1 and 12 of the histogram.

We can see on the image below the execution plan of the previous query. The query optimizer decided that an index seek and a key lookup is the best plan. 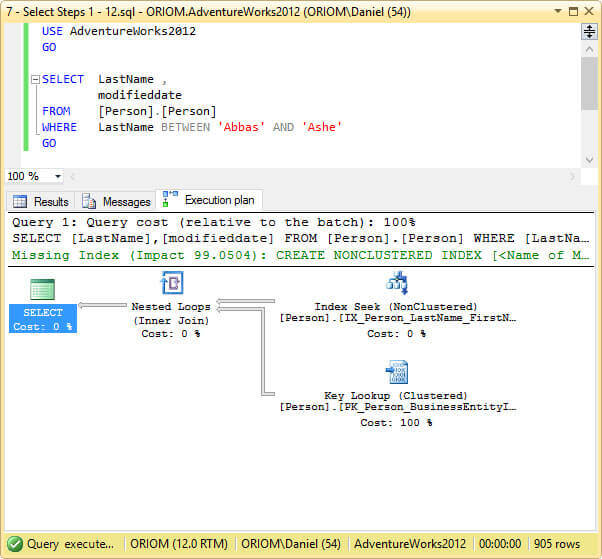 In the other hand, if we execute the same query, but this time listing the persons whose last name is between the range “Abbas” and “Bailey”, just one step further on the upper boundary.

As you can see on the next image, now the query optimizer has decided that the best approach is to perform a clustered index scan. 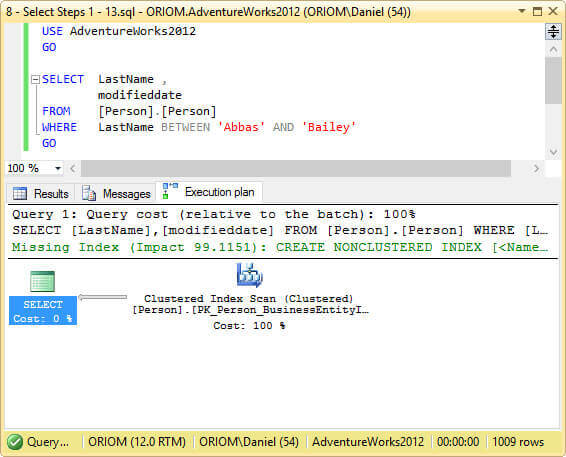 Use DBCC UPDATEUSAGE to get accurate SQL Server space allocation

Error 601: Could not continue scan with NOLOCK due to SQL Server data movement