SQL Server Data Tools (SSDT) is the development environment for creating and maintaining Integration Services (SSIS) packages and projects. Historically, there was no backwards compatibility, meaning that with a newer version of SSDT, you couldn't create SSIS packages for an older version of SSDT. Since the SQL Server 2016 release, SQL Server Data Tools supports backwards compatibility up to SQL Server 2012. This tip explains the new feature.

The latest releases of SSDT (since SQL Server 2016) solve these issues: by introducing backwards compatibility you can use one single version of SSDT to develop and maintain versions of SSIS projects from 2012 up to 2017 and later. It's important to note that SSAS and SSRS support backwards compatibility for quite some time now.

The remainder of this tip was written using the Visual Studio 2015 SSDT release, together with SQL Server 2016. All of the advice given in this tip is valid for later versions as well.

When you add a new project, you can see it's now possible to create database projects and BI projects as well in SSDT.

In the project properties, you can set the target SSIS version that SSDT will use for this project.

Once the target version is set, the SSIS toolbox will adapt accordingly. For example, in SQL Server 2016 there are new Hadoop tasks available and you can download Azure tasks from the Azure feature pack. 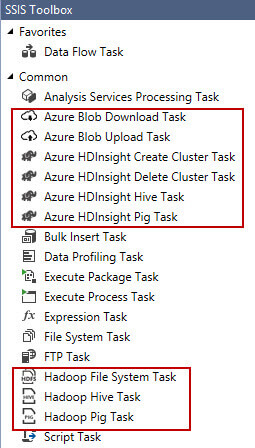 When setting the version to SQL Server 2014, all those new tasks will disappear from the SSIS Toolbox. The same is true for data flow transformations introduced in SQL Server 2016. 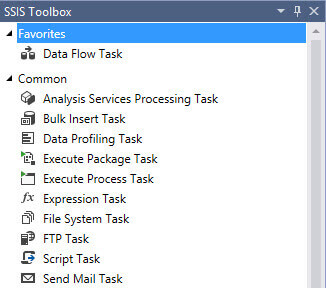 When changing the version of a project, you will get a warning that existing packages might be changed:

If you use SQL Server 2016 functionality though, you will get an error after setting the target version to an earlier version when opening the package:

The package will still open, but offending tasks, transformations or connection managers might disappear, or you are unable to open up an editor. It's possible that switching back to SQL Server 2016 doesn't solve the problem: the object might still be broken. In that case there is no other option than to remove the object and add it again.

At the time of writing, a couple of bugs exist when switching between target versions. You can find a list at the MSDN blog post What’s New for SSIS 2016 RC0?. It's possible some of those are already fixed when you read this.

When you have your own custom components in SSIS, you need to take some extra steps to make them work with the target version property. SQL Server MVP Joost van Rossum explains how you can do this in his blog post Switching Target Server Versions for custom components.

Adding existing packages to the project

When you add an existing SSIS package from an earlier version to the project - for example a SSIS 2012 package to a 2016 project - the package will be upgraded to match the target version. 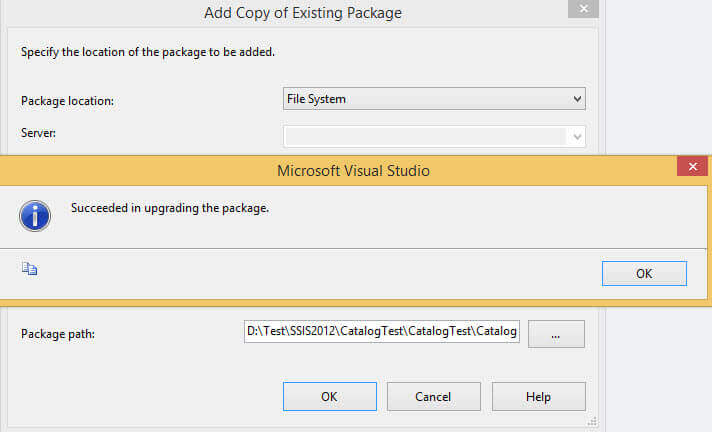 When the versions match, no upgrade takes place of course, the package is directly added to the project. You can also add packages from a higher version to the project, SSIS will try to downgrade them.

Testing shows however you can't always trust this message. Even with a success message, the package can be broken if you use SQL Server 2016 only components.

When you use SSDT 2015 to open a project created with an earlier version of SSDT, the upgrade wizard will automatically kick-in. This means all of the packages are upgraded to SQL Server 2016. 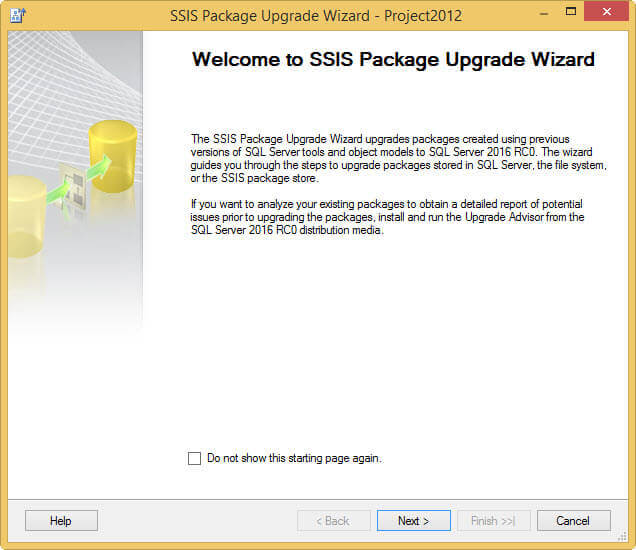 Although you can still downgrade the project back to the earlier version, going through the upgrade process is maybe something you do not want. As an alternative, you can edit the project file and add the following line:

This will make SSDT 2015 skip the upgrade wizard and directly open the project with the correct target version. For SQL Server 2014, you change SQLServer2012 into SQLServer2014 of course. Although this work around seems to work, manually editing the XML of the project file is not really supported. My advice is to create a new empty project, set the target version and then start adding packages.

Debugging the package is not a problem. 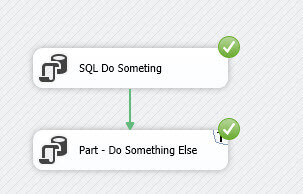 And you can also run the package inside a SQL Server 2014 SSIS Catalog: 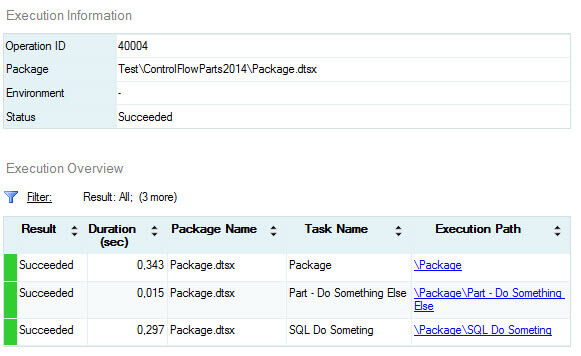 The Target Server Version property introduces backwards compatibility for SSIS project in SSDT 2015. With this new capability, an old sore of SSIS has finally been fixed: you can use only single version of Visual Studio to manage your different SSIS projects. It is recommended to set the server version at the start of the project and that you don't switch it around too often as it may lead to issues. The good news is that with SSDT 2015 and later, you can also use control flow parts in your older projects!