This tip describes an alternative approach to transferring rows from SQL Server 2014 to Oracle 11g that is more than 17 times faster than using the previously described Linked Server approach. The new approach uses a mix of technologies, including Microsoft's SSIS as well as Oracle SQL Plus and Oracle SQL Loader utilities. This tip describes how to automate and configure the solution.

The new approach described in this tip and the prior approach are compared with the same data sources, which include a custom 200,000 row table from a SQL Server 2014 database and the sample database that installs with Oracle 11g. You can download a backup file for the sample SQL Server database from the folder of resources associated with this article. Use a script like the following one to restore the database on your 64-bit SQL Server 2014 server presuming you do not already have a database named SSandOracleDataExchange on the server.

Architecture for the new approach

There are three steps to the solution implemented by the new approach.

The batch file has a single line of code. The /f switch takes an argument which is a path and file for the dtsx package. The following value in quotes is the path and file for the package. The home folder for the this demonstration is c:\SSandOracleDataExchange, and the folder for the ExportforOracle.dtsx package is ..\FromSStoOracleviacsv\FromSStoOracleviacsv\.

SQL Server and Oracle have subtly distinct ways of representing date values and converting date strings with YY versus YYYY for representing a year. Therefore, this tip formats SQL SERVER date strings to Oracle dates using an Oracle string-to-date conversion function. The use of the specially formatted string for a date and the Oracle date string-to-date conversion function guarantees SQL Server dates are properly represented in Oracle.

The modified date value representation for this demonstration is a YYYYMMDD string format where all values in the string are numeric. A YYYYMMDD string value can be readily converted to an Oracle date value with the Oracle TO_DATE function.

You can learn more about the function and Oracle versus SQL Server string/date representations at these links:

As the name for the Execute SQL task implies, this task creates a new table (ExportforOracle). The FIRST_NAME and LAST_NAME column values are identical to those in the SQL_SERVER_FOR_ORACLE table. The BIRTH_DATE column has a varchar(8) data type with YYYYMMDD values corresponding to the BIRTH_DATE date field values in the SQL_SERVER_FOR_ORACLE table. The following T-SQL code transforms SQL Server date values to YYYYMMDD values for ultimate representation as varchar(8) values.

The following two screen shots display the General tab and the Advanced tab from the flat file connection dialog of the Data Flow task. 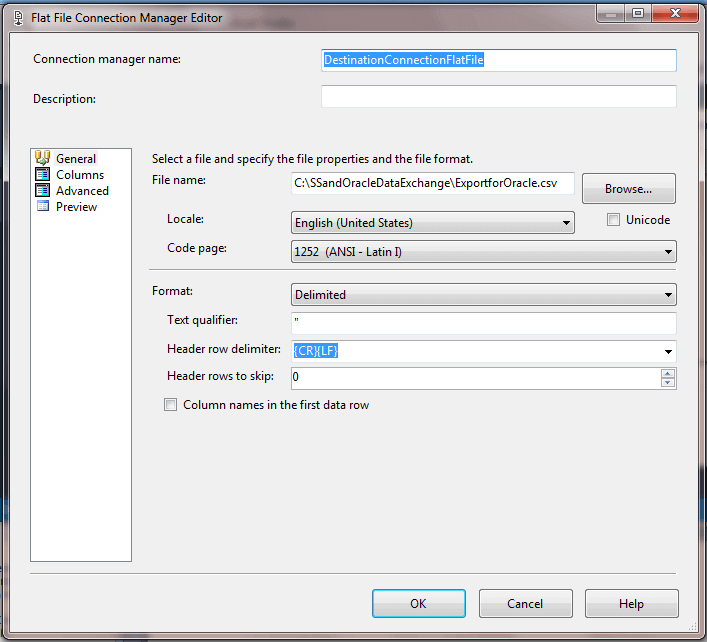 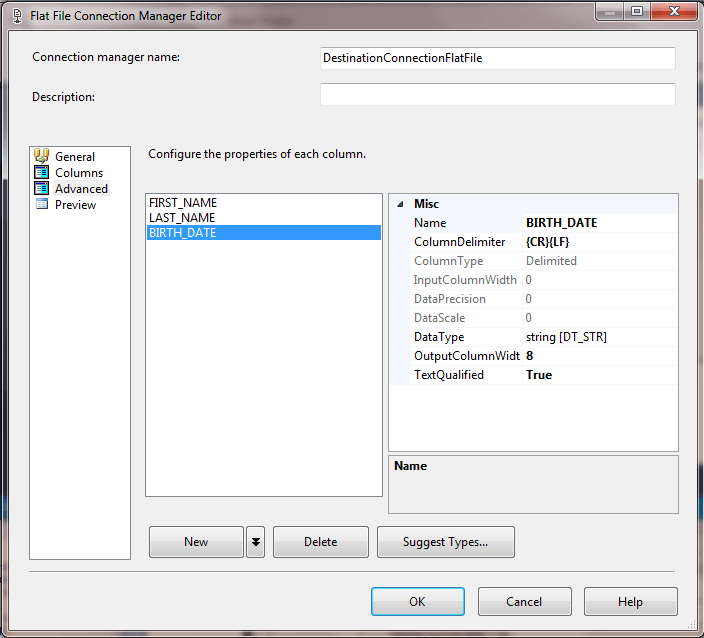 This last screen shot for the first step of the solution displays four rows from the output file named ExportforOracle.csv. There are comma delimiters between fields. Also, observe how each field value is embedded in double-quote marks to denote that it is a text value - whether or not the field value consists entirely of numeric values.

After installing Oracle 11g and unlocking the hr user account, you can use the account to run query statements, such as for dropping a table and creating a table in the hr schema. The current solution takes advantage of both of these capabilities.

Here are the command lines in the ConditionallyDropNAMESANDBIRTHDATES.sql file.

Here are the commands in the CreateNAMESANDBIRTHDATES.sql file. As you can see, the commands consist of a standard CREATE TABLE statement followed by an instruction to exit the SQL environment.

The final step of the solution is to load the file created in the first step of the solution into the table created in second step of the solution. The Oracle SQL Loader command-line utility is especially tailored for this kind of task. Just like SQL Plus, the SQL Loader utility installs as part of the Oracle 11g client software. The SQL Loader is an exceptionally rich tool, and even a superficial discussion of how to manage it is well beyond the scope of this tip. Happily, you just need a few features and parameters to make the tool copy a csv file like the one created in step 1 to the Oracle table created in step 2. If you want to learn more generally about SQL Loader, you can find good introductory material at these links (https://docs.oracle.com/cd/B19306_01/server.102/b14215/ldr_concepts.htm and  http://www.oracle.com/technetwork/testcontent/sql-loader-overview-095816.html).

The SQL Loader utility for Oracle 11g requires a login and enters a special environment after the login. For the purposes of this demonstration, three files are needed to manage the functionality of the SQL Loader utility. Of course, you also need data, which is to be loaded. In our case, the data to be loaded resides in a fourth file (the csv file output from step 1).

The following line invokes the SQL Loader utility in the ExportforOracle.bat file. The command logs into the Oracle 11g database with the hr account using its default password (of hr). The control parameter points to the control file (ExportforOracle.ctl). The log parameter specifies the .txt file name into which SQL Loader logs events during the load as well as the elapsed time for the load.

The ExportforOracle.ctl file's contents appear below. In this control file there are two main sections.

Examining the log file is one way of verifying whether the import of the ExportforOracle.csv file to the NAMESANDBIRTHDATES table was successful at a top line level. The following screen shot displays the log file with line numbers added by a text editor for easy reference of specific lines. Here are selected key points. 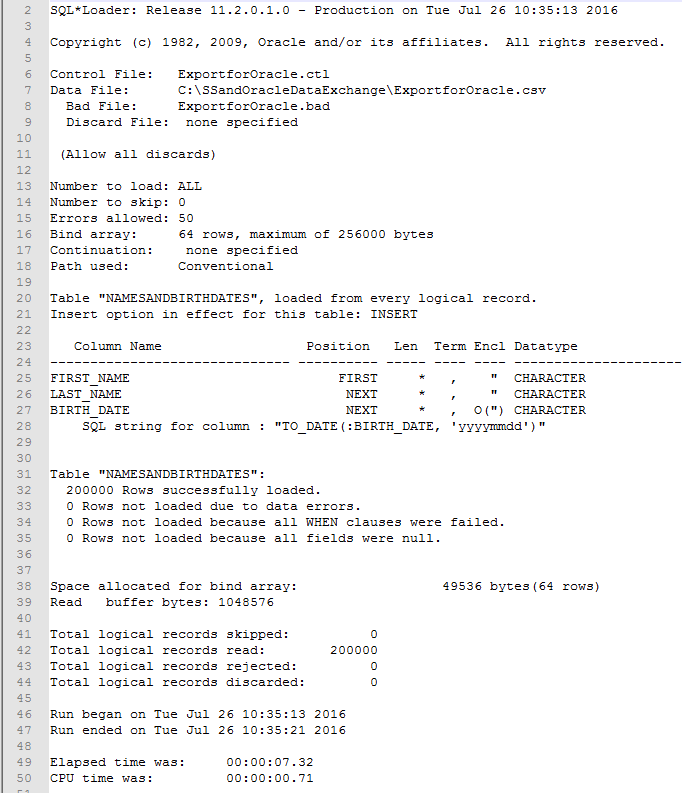 Your key take away from this tip should be that it is dramatically faster to transfer rows from SQL Server 2014 to Oracle 11g by using a dtsx package along with the Oracle SQL Plus and SQL Loader utilities than by creating a SQL Server linked server which points at an Oracle 11g database.

In many real-world contexts, the difference between 10 seconds and 2 minutes and 55 seconds will not be important. On the other hand, 200,000 rows of 3 column values each is not an enterprise scale data set. Enterprise scale conversion projects could easily involve transferring millions of rows with a hundred or more column values for each row. The savings for these kinds of conversion undertakings could be very significant, such as an elapsed time of hours versus days.

Therefore, if you have an enterprise scale conversion project in your future, it may well be worth your while to consider a solution like the one presented here. You can download all the files discussed in the tip from the zipped resource file associated with this tip. Be sure to examine the readme.txt file for critical instructions about setup and configuration instructions before using the files in the zipped folder.