SQL Server tries to respond to a user's query as quickly as possible. To achieve this, SQL Server tries hard at multiple levels of operation to make the query plan efficient. However, most of the performance related work done by the query optimizer is to get the best access method of the data, like what join is best, which physical join type is appropriate, should it scan or seek the index, etc.  Even if the query optimizer comes up with the best execution method, the query can still suffer because there could be a considerable CPU or I/O performance gap, to reduce some of this SQL Server uses the read ahead read mechanism.

A sequential read ahead read tries to read pages in a specific order either in allocation order or index order. Heaps are always scanned in the allocation order as heaps don't store data in any specified order. Indexes scan in the key order on which they are sorted, unless it's running on the read uncommitted isolation level or the nolock hint is used and the relation engine doesn't ask for an ordered scan. SQL Server supports random IOs as well. On a conventional rotating disk, random IOs are much slower than sequential IOs, thus for better performance throughput it has to support read ahead reads, which is called random prefetching.

Let's try to understand RAR (Read Ahead Read) with examples, that we will build a test table with some random data. To view the read ahead read phenomena we will enable statistics IO when we run the queries. Also, I will run DBCC DROPCLEANBUFFERS to flush all the data pages before each run, so the read ahead reads take place.

Note: DBCC DROPCLEANBUFFERS is not recommended on production servers, unless there is an absolute need. Running this command flushes the buffer cache.

Now that the test data has been built, we can start the test.

To check whether the read ahead read mechanism occurred, we will can check the output of statistics io. Look at the read-ahead reads information below, we can see that 2 read-ahead read pages were brought into the buffer pool.

Now run the same query again without clearing the buffer cache. There is no need for read ahead reads, because those pages are already in the buffer pool.

Now run another query with a different value. The query is asking for different data pages which are not in the buffer cache already, so the RAR mechanism started and placed those pages into the buffer pool.

The statistics io shows there is no read-ahead reads on the TestTable, but there are on TestTable2.

In the execution plan, the outer table, TestTable, estimated rows is 26 thus the random prefetching is enabled for the inner table TestTable2.  Prefetching can be confirmed by right clicking on the Nested Loops Inner Join and selecting Properties.  In the properties there is a property named WithUnorderedPrefetch which is equal to TRUE.

A quick test to see when random prefetching is not enabled is to use a row count less than 26.

Read-ahead reads don't occur for either table and we also confirm in the execution plan if we look at the properties for the Nested Loops Inner Join, we can see the WithUnorderedPrefetch property does not exist.

What happens when the system is heavily used, what kind of performance difference do we get with and without read ahead reads? Also, in our simple tests we were only using one or two tables, so think about the impact when there are more table joins.

Below I am running diskspd.exe and we can confirm the storage is under pressure by looking at Windows Task Manager. 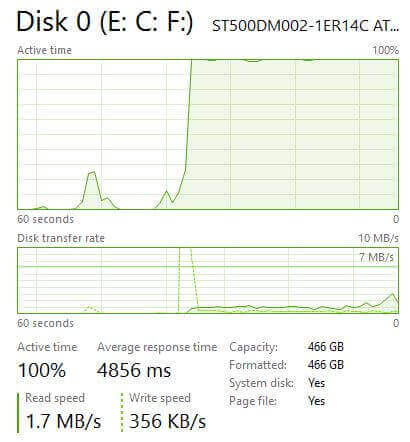 Now that the disk is under pressure, let's run some queries with and without read ahead reads.

On my system after disabling sequential read ahead reads, the query took roughly 14 seconds to execute and with it enabled it took only 2.5 seconds which is a big performance margin.

Now let's test random prefetching. To disable random prefetching we will use trace flag 8744. This trace flag is also documented and supported. We are forcing the optimizer to choose a loop join, so we all get a Nested Loops join as the physical join. We are also using maxdop = 1 to disable parallelism, so we all get the same execution plan regardless of how many processors your system has.

We can see an even more dramatic difference when prefetching is disabled.  The query took more than 37 seconds to execute when disabled and only 2.5 seconds when enabled. This is quite a big performance difference.

Read ahead reads are enabled by default, so do we really need to be concerned about this feature? Usually not, unless the scan or seek cardinality estimation is too low compared to the actual cardinality and because of that the read ahead read mechanism is not started which can have a negative impact on query execution.

Neeraj Prasad Sharma is a Dot Net developer, who is amazed by the SQL Server query optimizer.