Now that SQL Server is available on Linux, many companies may start to use a Linux server for testing database development due to license costs. In this tip I will show you how to move a copy of a database from Windows SQL Server to a Linux SQL Server installation.

It's a fact that companies across the globe want to reduce costs. That and the forthcoming edition of SQL Server for Linux brings us a possible scenario where non-production SQL Server databases may be running on top of Linux systems. Because of this, we must know how to move a SQL Server database from Windows to Linux.

The first step to copy a database to Linux is, of course, to take a backup of the database we want to move. But remember that if the database is in production you should take the backup with the COPY_ONLY option to not break the backup sequence. If you don't know about this concept I suggest you to read the SQL Server Backup Options and Commands Tutorial and the following tip COPY_ONLY Backups with SQL Server in order to know more.

The most common way to move files into Linux is with Secure Copy (also known as SCP). It is based on the Secure Shell (referred to as SSH) protocol. For us who are used to the Windows GUI, I suggest you use the open source program WinSCP, which can be downloaded for free at this URL: https://winscp.net/eng/download.php.

When you start WinSCP it shows a login screen like the image below, asking you for the connection details. 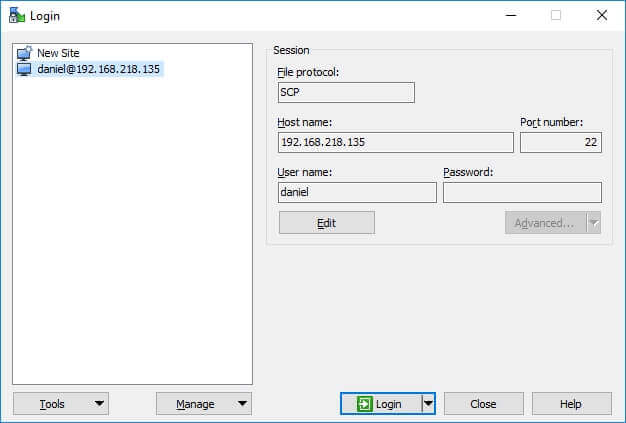 After successfully logging in, the program shows two panels the file and folder structure of the current machine (on the left) and the remote server (on the right). To copy a file is as easy as dragging the file from the local file system panel to the remote file system panel. I am using my home folder on the remote system to copy the backup file. 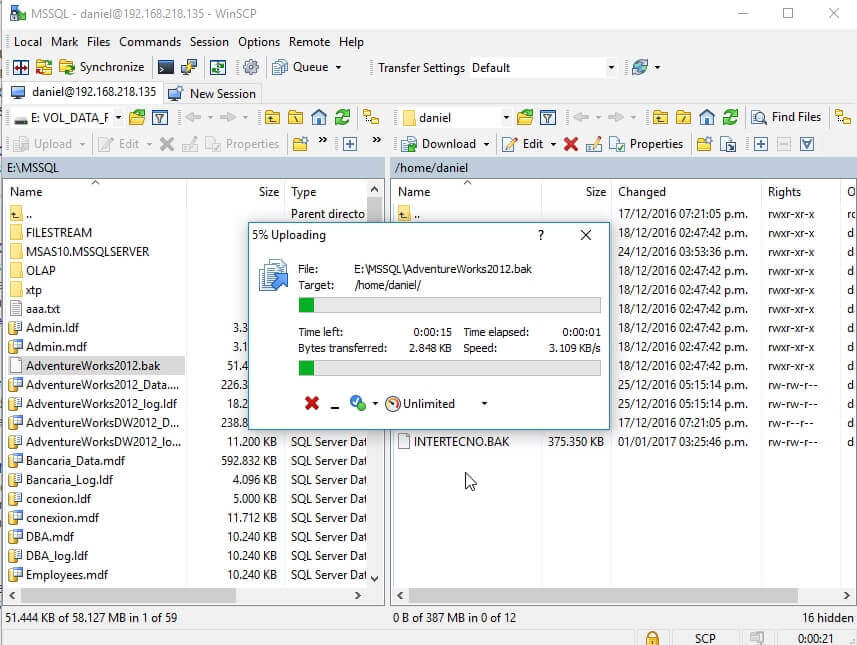 Restoring the SQL Server Database on a Linux Server 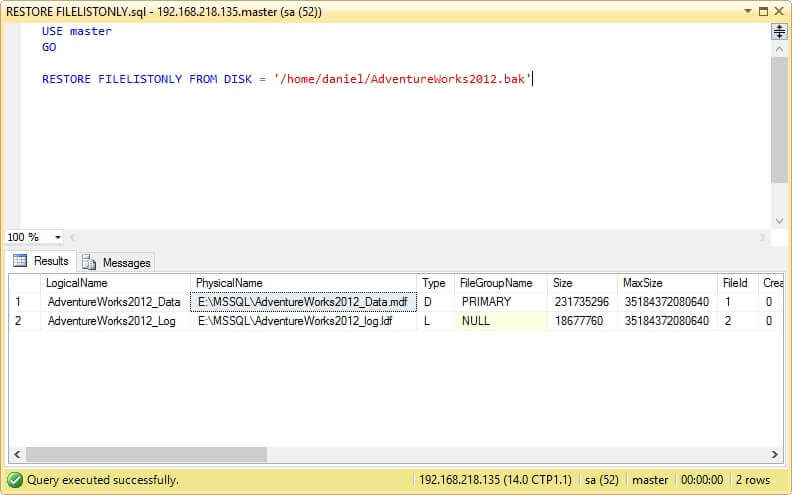 If you take a look at the PhysicalName column from the result, you will see that it is represented as a Windows path. This means that we must restore the database using the WITH MOVE option; otherwise we will get an error message telling us that the Directory lookup has failed as shown below. 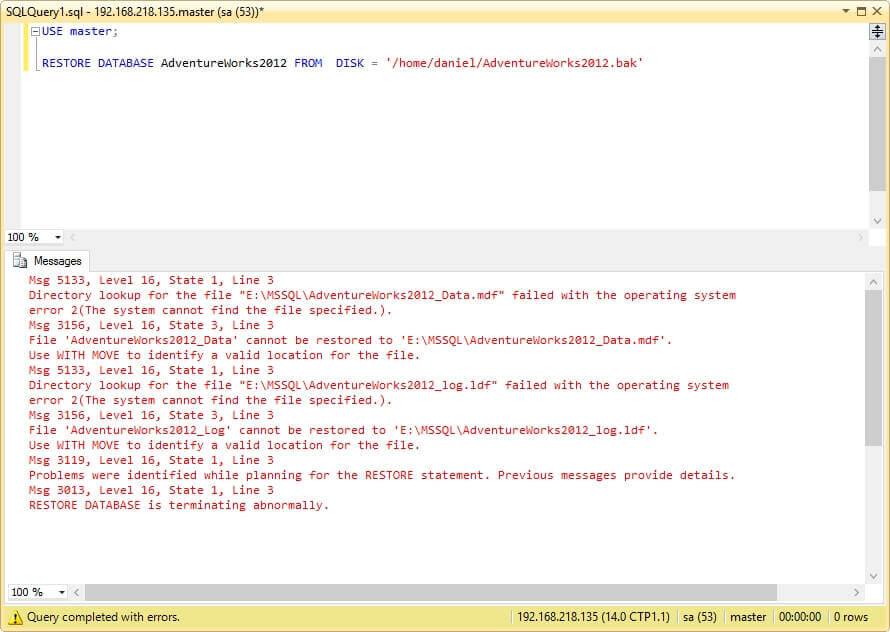 I will restore the database to the default SQL Server data location which is /var/opt/mssql/data using the WITH MOVE option.

The next is a screen capture showing that we have successfully restored the database, and in this case the database was upgraded to the latest version. 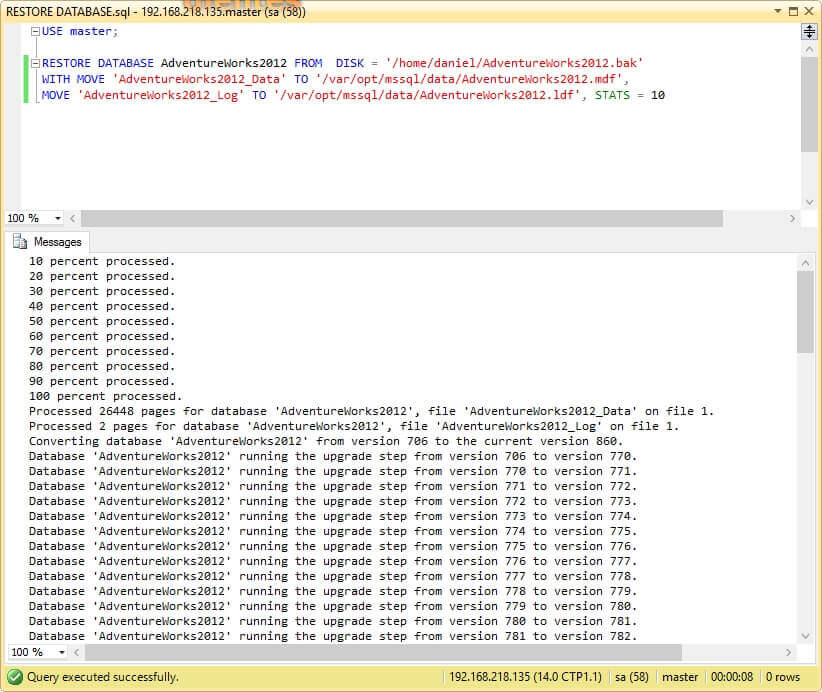 I have copied two files of a database named DBA (DBA.mdf and DBA_log.ldf) to the location /var/opt/mssql/data. In order to change ownership of those files to the SQL Server user account I have to run the following command.

The mssql:mssql on the command represents the user and group to grant ownership, the rest is the file names (notice that I have used a wildcard DBA*).

Also we need to grant read and write permissions on the files to the SQL Server user account. We do so with the chmod command. 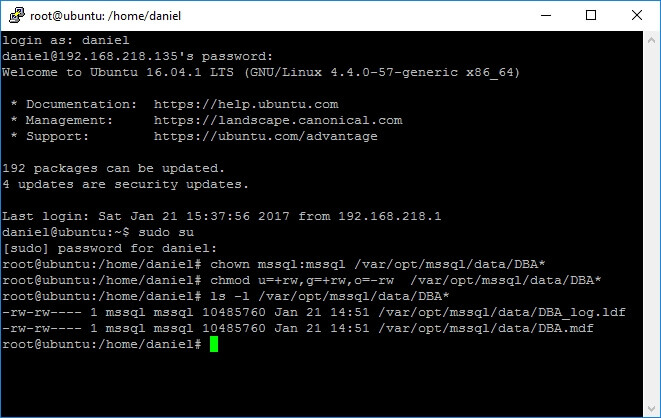 After completing the previous step I am able to attach the database the way we normally do. 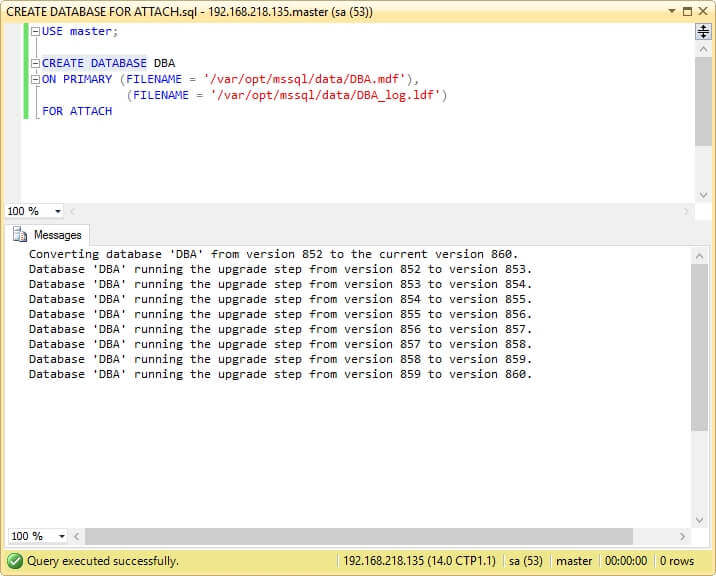