SQL Server AlwaysOn is a marketing term which refers to the high availability and disaster recovery solution introduced when SQL Server 2012 was launched.

Whilst both technologies have similarities such as requiring Windows Server Failover Clustering (WSFC) as the foundation for its implementation, each is a distinct technology under the AlwaysOn umbrella.

AlwaysOn FCI needs shared storage like an iSCSI or Fibre Channel SAN that can be accessed by all of the nodes in the cluster. There is also the option to use third party data replication tools that can assist with the storage requirements if you don't have shared storage or want to do this for virtual machines or in the cloud.

It supports multisite clustering across subnets which enables failover of SQL Server instances across data centers, but this requires replication of the data between the shared storage in each of the data centers. 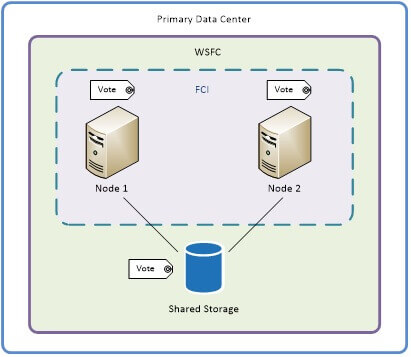 The quorum mode helps determine which nodes are available and which node should be the primary node.  By having another machine/object involved it can determine if communication between machines is lost are therefore whether a failover should occur. Below are common examples of quorum mode that can be used in an AlwaysOn FCI configuration.

A symmetric storage means a cluster disk that is shared between all the WSFC nodes. This allows the shared disk storage to be available to all potential failover nodes in the WSFC cluster.

When you install SQL Server you select the "New SQL stand-alone installation..." option.

An implementation of AlwaysOn AG for HA and DR (using quorum mode Node Majority) is depicted below. 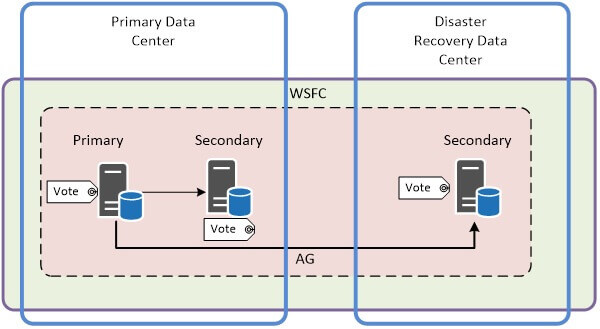 Below are several common examples of quorum mode used in an AlwaysOn AG configuration.

An asymmetric storage means a cluster disk is shared only between a subset of the nodes. Asymmetric disk capability was first introduced on Windows Server 2008. It allows a disk witness to be configured and accessible only to nodes in one site, typically the primary site.

AlwaysOn feature is now an included in SQL Server 2016 Standard Edition, but it is referred to as AlwaysOn BAG. It is created and managed similarly to AG, but AlwaysOn BAG is capable to only use a subset of features compared to the more advanced AlwaysOn AG on SQL Server Enterprise Edition. An example limitation is BAG only allows to have two replicas (primary and secondary).

AlwaysOn BAG provides failover support for a single database only, replacing the database mirroring which is deprecated.

This configuration allows secondary replicas of an AG to exist in a different geographical region than the primary. An example use case would be to enable read-only workloads for remote regions and at the same time avoid any potential network problem at the secondary site which can affect the primary site.

Each of the two technologies differs in its purpose. It is possible to combine AlwaysOn FCI and AlwaysOn AG. Business requirements might require local high availability within a data center using AlwaysOn FCI, and cross data center disaster recovery using AlwaysOn AG. It just means the solution would then consist of a combination of shared storage and non-shared storage in the implementation.

Other things to note for both:

Whenever SQL Server AlwaysOn is mentioned, it is not specific because it can refer to either AlwaysOn FCI or AlwaysOn AG.