You installed SQL Server on Linux and need to customize the default installation, for instance change its default port, instance collation or even add trace flags. In this tip I will show you how easy it is.

With the arrival of SQL Server to Linux came new ways for us to do our DBA tasks. On Windows we are used to using SQL Server Configuration Manager as the de facto configuration tool for SQL Server, because of its simplicity compared with other ways like PowerShell scripting. Now on Linux we don't have that graphical interface to interact with and we must rely on the console, but surprisingly it's not too hard to use. Microsoft included on the Linux edition of SQL Server a configuration tool named mssql-conf which you may find on the /opt/mssql/bin/ folder.

You can use this argument to set or unset one option at a time by using the following command.

For example, if you want to configure SQL Server to use port 444 you need to execute the following statement on an elevated prompt.

Also, if you want to let SQL Server to use the default port instead of 444 you have to run the following command. 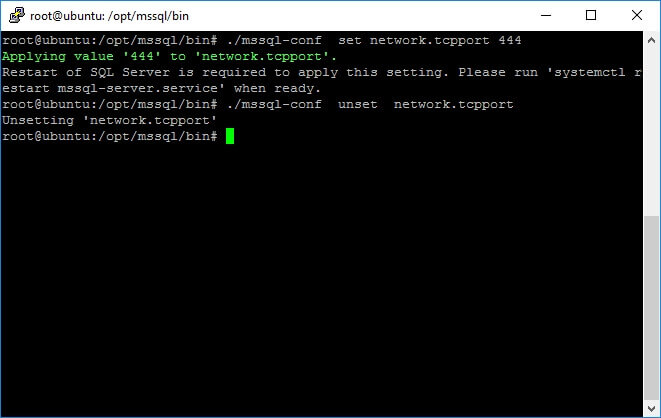 You can use this argument to set on or off one or more trace flags at a time with the following commands.

As previously stated, you can get the list of available settings to use with set and unset arguments by running the following command:

The following image is a screen capture that shows the execution of this command.

If you run mssql-conf with this argument while the instance is running it will not work.

This argument is used to change the instance collation to one of the available collations listed on file /opt/mssql/lib/mssql-conf/collations.txt. The SQL Server service must be offline in order for this command to work.

There is a command on Linux named man (from the English word Manual) that receives as an argument another command, and displays what is known as the Manual Pages. Yes, Microsoft knew about that and added a reference into the Manual pages about mssql-conf that you can query with the following command. 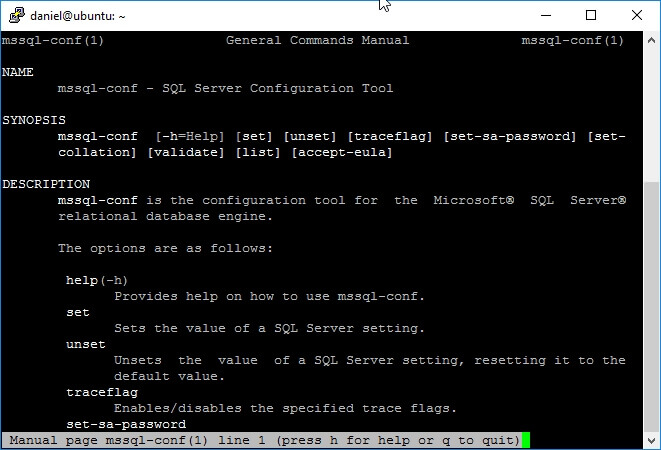