I occasionally receive requests to count SQL Server Agent Job runs for the past week, month, quarter, or year. However, I notice that the msdb sysjobhistory table does not always maintain historical job run data for the requests that I receive. Job run counts are sometimes less than they should be, and the shortfall is typically most common when I have to count jobs over longer periods, jobs with many steps, or jobs that run very often. Please provide some code samples and discuss some administrative issues that will help me to track and count SQL Server Agent Job runs validly for a variety of different requirements.

In this tip, you will get an introduction to the columns and rows of the sysjobhistory table. You will learn manual and programmatic means of setting limits on the amount of data in the sysjobhistory table. The tip also includes code samples to help you maintain historical data about SQL Server job runs outside of the built-in msdb SQL SERVER Agent tables for special job run tracking requirements.

A Simple Listing of Column Values from the sysjobhistory table

A set of rows exists in the sysjobhistory table for each run of a job. A job run with a single step will have 2 rows in its set -- one for its sole step and another for the overall job. In general, the row set size for a job run will be one more than the number of executed steps in the job. If a job is disabled and it is never run on demand, the job will not have any rows in the sysjobhistory table.

A summary of each of the selected sysjobhistory columns in the query below appears next.

The original tip describing the Four step job with error branching job shows a 10-second wait in each step of the job. Aside from the 10-second wait, the code executes almost instantly. Therefore, the duration of each step is just about 10 seconds. The run_duration column values for individual steps within the job clearly reflects the 10-second job step durations. Additionally, the overall job rows with a step_name value of (Job outcome) have a run_duration column value of 40 seconds on July 14 and 30 seconds on July 15. The reduced durations on July 15 reflect the

The following script illustrates the application of the preceding guidelines for counting enabled, scheduled job runs according to whether they are successful or not. The script joins result sets from three sub-queries.

The computation of the total duration for job runs merits special commentary. This computation is based on the run_duration column value from the sysjobhistory table. Recall that the format for these column values are hhmmss in an int data type. Furthermore, hh and mm time blocks are omitted if there are no values for them. The computation of a job's total duration as a sum of run_duration values across the executed steps of a job requires the conversion of all three time blocks (hh, mm, ss) to a common metric. The expression in the script converts the duration for each job run step to seconds before summing across all the steps within a job run and then all the job runs overall.

Happily, the overwhelming majority of all the job runs for enabled, scheduled jobs are successful (over 99.6%). However, the result set does highlight 3 job runs out of 29 job runs for the Compute Inserts daily at midnight job that are not successful. Because all jobs were unit tested and verified as successful when run by themselves, the pattern of failures points to potential conflicts of the Compute Inserts daily at midnight job with one or more other jobs.

Continued testing with the code above and examination of the underlying job settings pointed to the root cause of the job run failures for the Compute Inserts daily at midnight job. It turns out that this job and another job named Create a two-step reporting job can insert rows into the same table at about the same time (midnight). Additional testing verified that either of the two jobs (Compute Inserts daily at midnight or Create a two-step reporting job) could fail. The two jobs were created for two prior but different tip articles on how to create SQL Server Agent jobs. Because both jobs perform the same function, one job can be deleted (or disabled if you wish to retain it for future reference). The more robust job has the name Create a two-step reporting job. Therefore, the conflict was eliminated by disabling the job named Compute Inserts daily at midnight.

It should also be noted that at least two jobs (Four step job with error branching and Insert a value in a table with a schedule) have more than 50 successful job runs each. The default limit on the number rows for a job in the sysjobhistory table is 100. Therefore, for a single-step job that requires two rows in the sysjobhistory table for each run, the maximum number of tracked job runs is 50. In order to track more than 50 job runs for a job that can run many times within a day and/or on most days of each week, you will typically need to modify the default limit value for the number of rows per job. The next several sections dive more deeply into the limits on the number of job runs tracked by the sysjobhistory table and how to modify those limits as well as even bypass them for providing job run reports, such as variants of the one appearing in the preceding screen shot.

Guidelines for Controlling Job Run Limits for the Sysjobhistory Table

Notice the limits for the history log table (sysjobhistory) from the screen below can be set based on a number of rows or on a historical retention period, such as a number of weeks. Recall that a job with just one step will have two rows per job run, and the number of rows per job run grows as the number of steps in a job grow. As mentioned previously, the default limit for job run rows is 100 per job and 1000 rows over all jobs. These default limits allow the job history table to be opened quickly, but the limits may not be appropriate for tracking jobs that run often and/or have many steps or which need to be tracked over several weeks or even months. When your primary objective is counting job runs instead of just quickly opening the history log window in the SQL Server Agent user interface, you may find it desirable to set limits based on the number of steps and schedules for the jobs for which you plan to count job runs. The limits in the screen below are 1000 rows per job and 20000 rows overall. 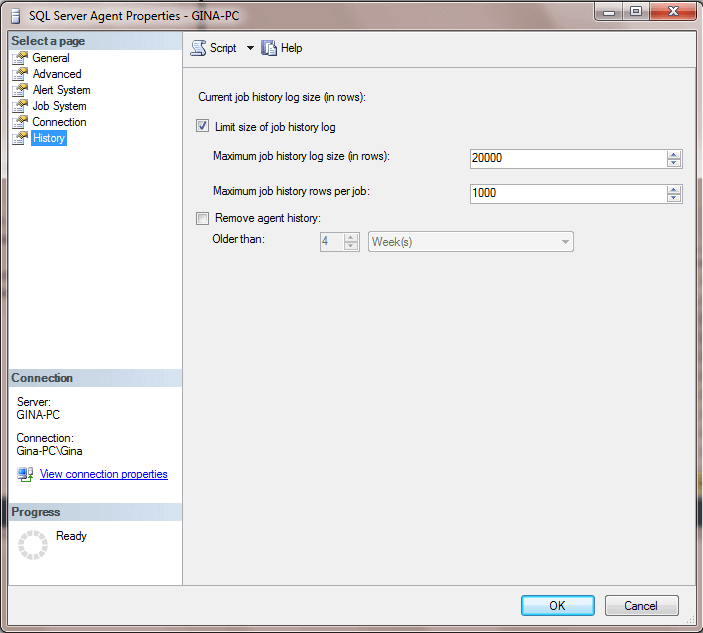 This link to the Microsoft.com site gives step-by-step instructions on how to manually change the log history retained in terms of number of rows within the sysjobhistory table or length in time from today.

Demonstration of Controls for Job Run Limits for the Sysjobhistory Table

The preceding section introduces you to manual and programmatic approaches for controlling how much history is retained in the sysjobhistory table. No matter which approach you use for history retention, there will come a time when retaining more job history is no longer feasible - especially if your SQL Server Agent has a lot of jobs and/or some jobs have many steps that occur often, such as multi-step jobs that run at short intervals throughout the day. The history retention issue arises because the job history table also is the source for showing job run details in the SQL Server Agent user interface, and big tables can be relatively slow to open and tedious to navigate manually.

You may be able to mitigate partially the negative consequences of retaining more history by retaining more history for jobs that run less frequently and less history for jobs that run more frequently. The following script demonstrates the use of some code for resetting the amount of history retained for enabled, scheduled jobs in the sysjobhistory table. Recall that the Compute Inserts daily at midnight job was disabled based on its conflict with the job named Create a two-step reporting job. As a consequence, there are just four jobs for which job runs are tracked in this section instead of the five jobs in the Count and Total Duration of Successful and Non-Successful Job Runs for Enabled, Scheduled Jobs section.

The second batch starts by setting up to assign a history window of 14 days for two jobs. You can do this through assigning an expression for 14 days before today to the @OldestDate local variable. The transformation of the history window size is achieved by invoking the sp_purge_jobhistory stored procedure twice - for the jobs named Insert a value in a table with a schedule and syspolicy_purge_history. On each invocation of the stored procedure, the @OldestDate local variable value is assigned to the @oldest_date stored procedure parameter.

The following screen shot shows the result set from the script presented in the Count and Total Duration of Successful and Non-successful Job Runs for Enabled, Scheduled Jobs section after running the preceding code in this section to modify job history retention and after disabling the Compute Inserts daily at midnight job.

The two jobs with 14-day history retention windows were impacted differently regarding how many job runs are retained.

To give you some ideas about how to approach this kind of task, this tip first shows how to make a table in a non-msdb database for storing job run history. Then, it shows how to populate the external table created to store the history.

The following script creates a table named external_job_history in the dbo schema of the for_sql_server_agent_jobs database. You are likely to create this table just once, but you may want to back it up on a regular basis after you start populating it.

You can use the next simple script as the basis for a process of inserting rows into the external_job_history table. Recall that our tip is concerned exclusively with enabled, scheduled jobs. You may care to tweak the code if your interests are broader or narrower.

If you do not build some controls to guard against the insertion of duplicate history rows, you may from time to time insert duplicate job run history rows into the external_job_history table. These can be easily excluded from job run reports by using a query such as the following one for all historical job run analyses.