One of the most flexible ways to run Python scripts from SSMS is via the xp_cmdshell extended stored procedure. This approach lets you invoke a Windows batch file that runs a Python script so that the output returns to SSMS. In this tip, we'll review the elements of the proof of concept for running Python scripts in SSMS from an earlier tip. We will also build on the proof of concept by offering an approach that allows a DBA to control who can enable/disable and run the xp_cmdshell extended stored procedure without granting logins membership in the sysadmin role. Additionally, you will learn how to create a Windows standard user account to operate on behalf of the xp_cmdshell extended stored procedure. In coordination with a Windows systems administrator, permissions for this standard Windows account can be set to restrict its ability to delete files from selected folders or even selected files within a folder.

The earlier Python script tip used a simple Python program that merely assessed if each of a set of numbers was odd or even. The new Python script introduced here covers more advanced functionality that pulls stock price data from Google Finance to populate a table within a SQL Server instance. The new Python script also illustrates an approach to parsing results returned by Python to SSMS. This more advanced application involves adding an external code library to the core Python code to implement a task. Adding libraries is an easy way of extending core Python capabilities, and this tip presents step-by-step instructions for installing custom libraries to a Python installation.

In case you do not have Python installed for your development team, please refer to the prior Python script tip. That tip presents a series of screen shots illustrating a best practice on how to download Python for use by a team of developers on a development SQL Server instance.

The elements of running the xp_cmdshell extended stored procedure

While it is not required, it is easy to enable/disable the xp_cmdshell extended stored procedure from a SQL Server login belonging to the sysadmin role. Furthermore, it may simplify running a Windows batch file by specifying a Windows account that belongs to a Windows administration group (or even the Built-in Administrator account). Neither of these practices are desirable from a security perspective because they expose high level Windows accounts and SQL Server logins that can be used for bad purposes by attackers.

The following script shows T-SQL code to grant the two permissions for enabling/disabling and invoking the xp_cmdshell extended stored procedure. The grants are for two logins ([SQL Server Computer Name\python_user1] and [SQL Server Computer Name\python_user2]) for developer team members. You can add additional pairs of grants for as many other developer team members needing the permissions. A DBA can drop the privileges conveyed by the grant statements for a login by replacing the grant keyword with the revoke keyword. The following script is meant to be run and maintained exclusively by a DBA.

In addition to these grants, it is also necessary to setup a proxy credential for running Python scripts. Again, the goal is to setup the proxy account with minimal permissions. The strategy recommended by this tip is to use a standard Windows user account, such as one named any_standard_user for the Windows server. A related good practice is for the Windows system administrator to deny the standard Windows account permission to delete files in selected folders. Additionally, the Windows user account does not even need to be able to login to SQL Server. After all, the Windows account for the ##xp_cmdshell_proxy_account## credential only operates inside of the Windows shell environment opened by the xp_cmdshell extended stored procedure. The following screen shot shows a User Accounts view of the account from Control Panel. Notice it is password protected.

After the grants for dev team member logins and the proper setup of the proxy credential for the xp_cmdshell extended stored procedure, any dev team member can run the following code to invoke an xp_cmdshell extended stored procedure that, in turn, opens a Windows shell, from which a batch file is launched to run a Python script. The following code is for the run_find_odd_even_nums.bat file that invokes the find_odd_even_nums.py Python script file.

The Python script file and its Windows batch file were covered extensively in a prior tip. The prior tip used a T-SQL script for invoking the xp_cmdshell extended stored procedure that relied on login impersonation. The major point of showing the following T-SQL script is to indicate that the Windows batch file for invoking the Python program can run without the need for impersonating another login when used with the security practices described in this tip.

For your easy reference, here's a screen shot with the preceding code sample and its output appearing in SSMS. 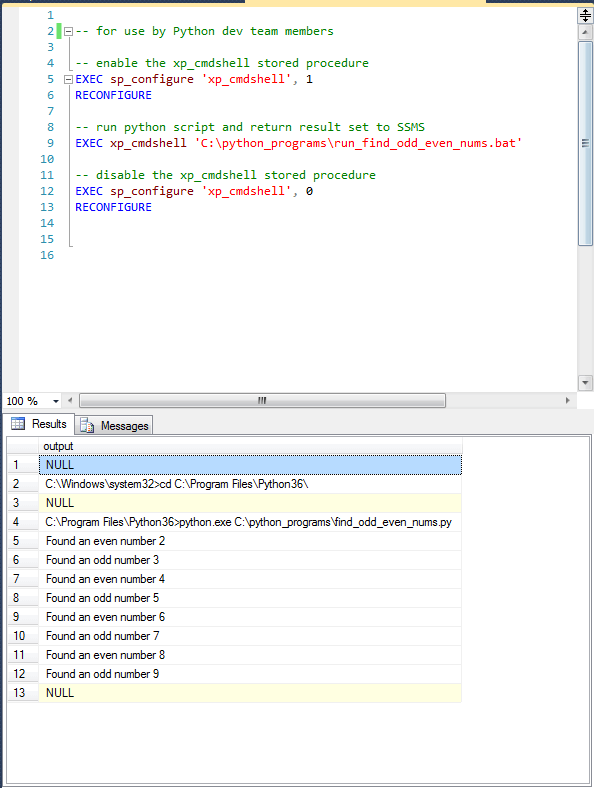 Readying Python to use a code library

External code libraries for Python provide pre-built sets of functions that facilitate the development of solutions. The pandas_datareader library expedites tasks dealing with rows and columns of data. You can use this library for many purposes, including downloading historical stock price data for transfer to a SQL Server table. This tip will present a demonstration of how to use the pandas_datareader library to download the data for a stock over nearly a 2-year period.

Before you use a library, you need to install it. I found that the following steps worked for adding a Python code library to the all-users Python install on a Windows 7 computer. Recall that a prior tip listed the step-by-step installation screens for an all-users Python installation; the same prior tip indicated that the default installation was for a single user. Here are steps you can follow to install the pandas_datareader library.

There are lots of code samples around the web illustrating how to use Python code libraries. Here is a link that you may find a helpful starting point for using the pandas_datareader library for downloading historical stock price data and other economic data.

I developed the code samples in this section by successively modifying a code sample within the previously referenced linked article and examining the output of various tweaks in IDLE, the Python integrated development language environment that installs with Python. The pandas_datareader library has pre-set interfaces for programmatically extracting historical stock price data from popular sources, such as Google Finance and Yahoo Finance. I arbitrarily selected Google Finance for this demonstration. This functionality is convenient over non-Python approaches because you do not have to download csv files manually through a browser and then subsequently read and load the downloaded csv files into a SQL Server table with a tool like SSIS.

The following two screen shots show the beginning and ending of the output from the preceding script. One especially important point to observe is that not all the historical data from the start date through the end date appears in the output from the print statement. For example, the first set of rows are for the first trading day in January 2017 through around the middle of February 2017. Then, a set of markers (. . .) denote missing data from the output display. These missing data markers are followed by the final block of data from July 21, 2017 going through August 31, 2017. There are many intervening historical prices after the middle of February 2017 and before July 21, 2017 that do not appear in the output. 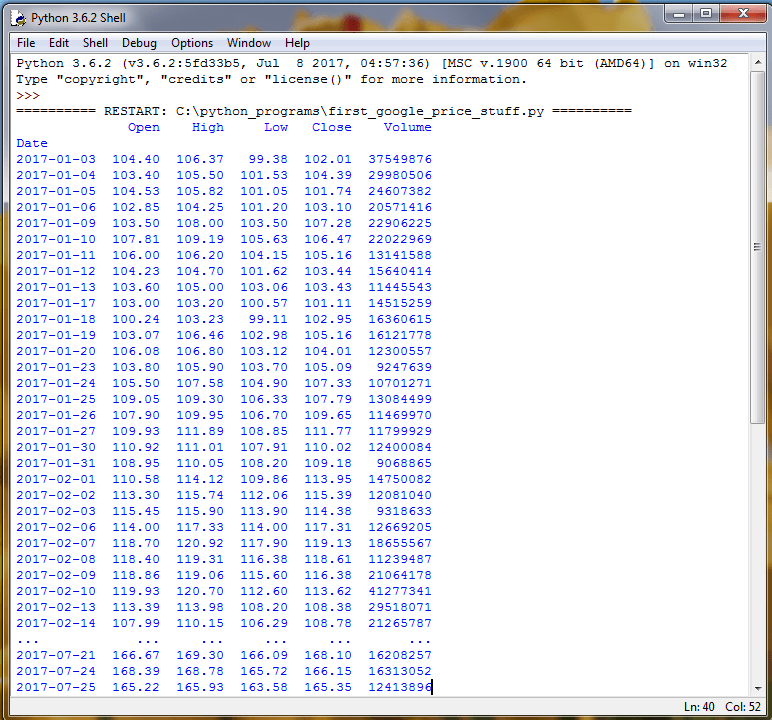 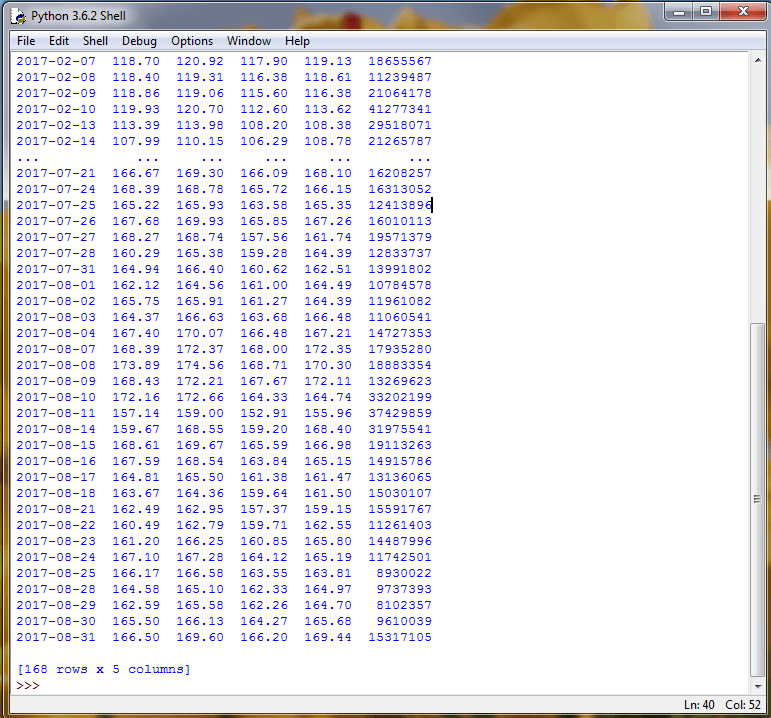 After several rounds of experimentation with the code, I finally ended up with the following code for listing all nvda prices in 2016 and 2017 through the last day of available trading stock price data in 2017. The code extracts nvda stock price data in two-month blocks for 2016 and 2017. Each two-month block corresponds to a distinct pandas dataframe. A two-month block was selected because this duration did not result in any missing rows within the print output for a block. It is likely that there are other solutions for getting no missing rows; this tip settled for this one because it was easy to specify within the context of the code sample for outputting historical stock prices.

The code starts with two import statements - one for the pandas_datareader library and a second for the built-in datetime library. There is a separate block of code to display each two-month block within a year. Comment lines starting with a hash sign (#) denote, respectively, the code blocks for 2016 and 2017. Within the code block for each two-month interval, these actions take place:

The next screen shot shows the output for the first two-month block. Notice that data is displayed only for trading days during which the stock market is open. For example, there is no data for January 1-3, 2016 because January 1 is a holiday for which stock market is closed and January 2-3 are weekend days for which the market is also closed. 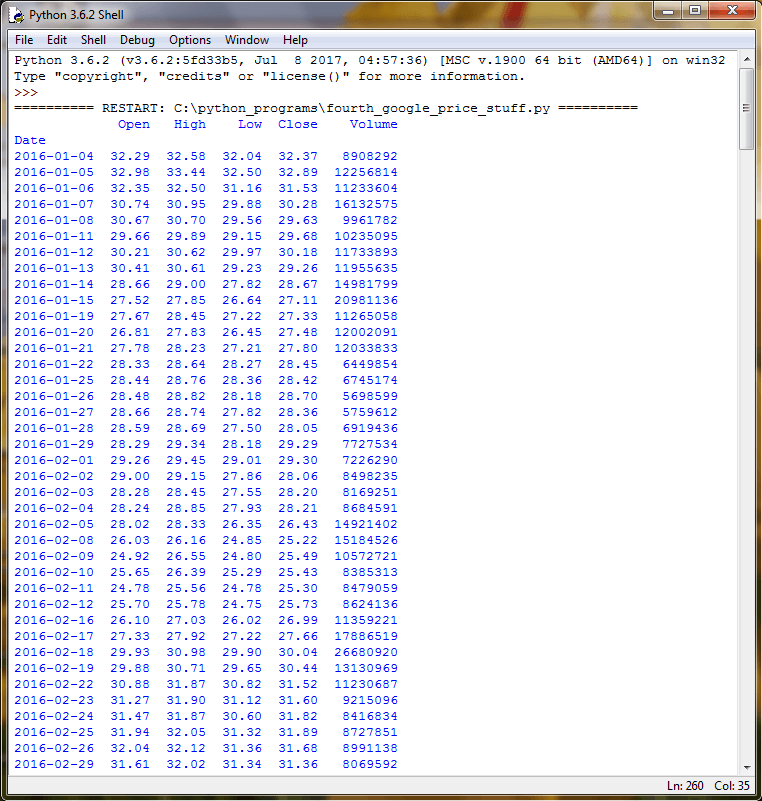 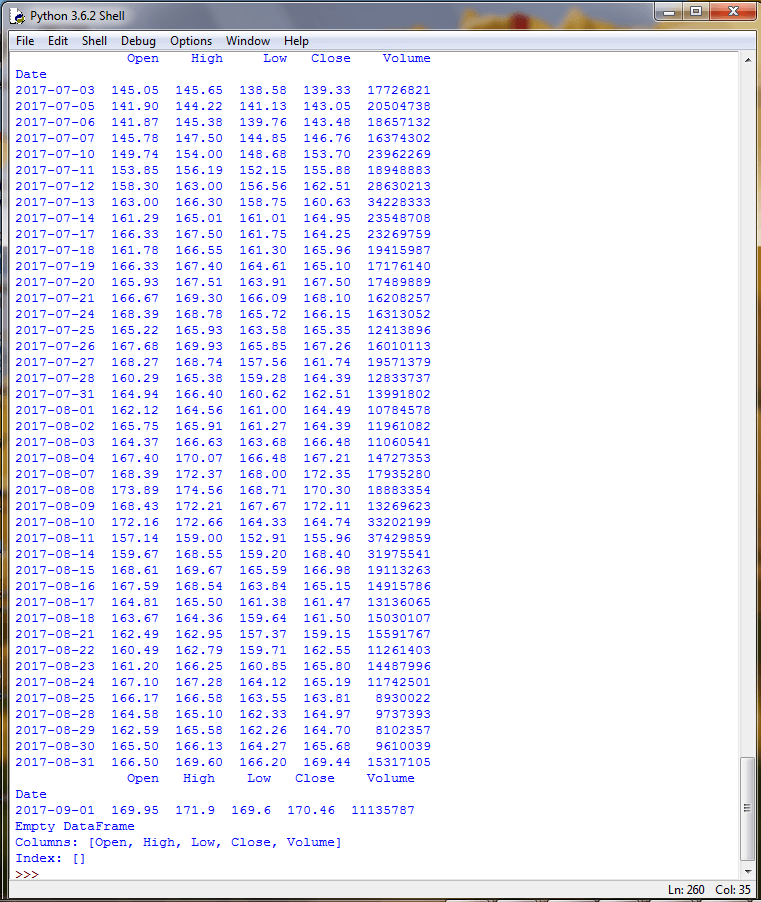 After you get a Python script generating some output that includes results you want in a SQL Server table, you need to run the script using the xp_cmdshell extended stored procedure as illustrated in "The Elements of Running the xp_cmdshell Extended Stored Procedure" section above. However, the tip for running a Python script from that section just displayed results in the SSMS Results tab. The example for this section pushes the raw output lines from the Python program into a temp table (#Result). Recall that the output from Python through the xp_cmdshell extended stored procedure is just a series of string row values in a single column. The output values, such as the date and the four types of prices (open, high, low, close), are grouped together into a single string value for each row. If you want to work with the values for each column in the Python output separately, you need to process the string values for each row in a couple of ways. The two operations performed on the imported Python output include:

The following T-SQL script includes the complete sample code for running the Python program to output historical stock prices for the nvda symbol for all trading days in 2016 and 2017. There are five key segments to the T-SQL script. Segments are divided from one another by dashed lines, and comment lines within each segment further clarify the role of code within a segment.

The filtering and parsing code in the fourth segment of the preceding script may best be understood by examining three excerpts from the raw output of the base Python code from the #Result temp table. The three excerpts appear in the following exhibit:

The output in the #Result table contains a mix of rows some with stock price data and others with no stock price data. Only rows that start with a date value are followed by stock price values. The where clause at the end of the fourth segment in the preceding script extracts just these rows for transfer to #Resultprocessed. The into clause, which is two lines before the where clause, pushes the filtered and cleaned data from #Result to #Resultprocessed.

After the date value, there are price values for the open, high, low, and close stock prices on a trading day. The prices do not always start in the same position from one row to the next. Furthermore, there is no standard delimiter, such as a comma or vertical bar, to mark the end of one price or the start of another price. It is the inconsistent placement of prices on a row without value delimiters which mandates the use of string expressions to extract the successive prices on a row. Some examples of inconsistent price placement are as follows. 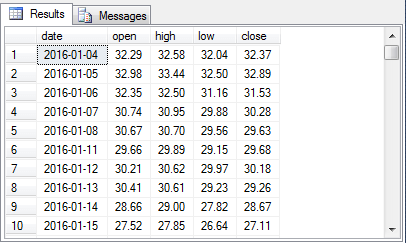 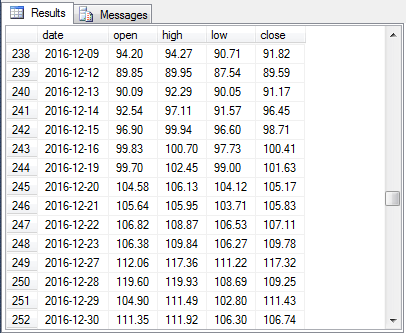 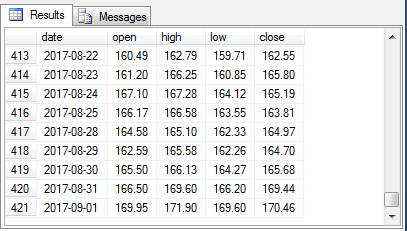