SQL Server 2016 introduced a feature for running external scripts, such as Python scripts. Unfortunately, many of the SQL Server installations within our organization are for earlier versions, but our IT developers still want to take advantage of Python development features. Please demonstrate how we can install Python to run Python scripts with SQL Server versions prior to 2016.

The sp_execute_external_script stored procedure was introduced with SQL Server 2016 for running external scripts from SQL Server Management Studio (SSMS). Organizations running SQL Server versions prior to 2016 do not have a built-in way to run scripts for popular external scripting environments, such as Python.

This tip starts with a review of how to download and install a recent version of Python for use by all users on a server. The standard Windows install instructions for Python default to a single-user installation. Next, this tip in its subsequent two sections reviews a simple Python script and how to run it from a cmd window session. The tip closes with a demonstration for running the Python script from SQL Server logins based on a mix of admin and non-admin Windows accounts.

Python is widely used and growing in popularity because of its ease of use, power, and extensibility. By mixing the capabilities of Python with SQL Server, you have a dynamic duo comprised of a popular programming solution along with an easy, familiar way to store and retrieve results from solutions.

Installing Python on a Server for All Users

I downloaded the Windows x86-64 executable installer. After downloading the installer, it was run as an administrator. The following set of screen shots show all the screens from the installer package through to the notice of a successful installation for Python 3.6.2. The download took around 10 minutes. The screens show the selections to load Python so that it is available to all users on a computer. These selections offer a work-around to the default single-user installation of Python. 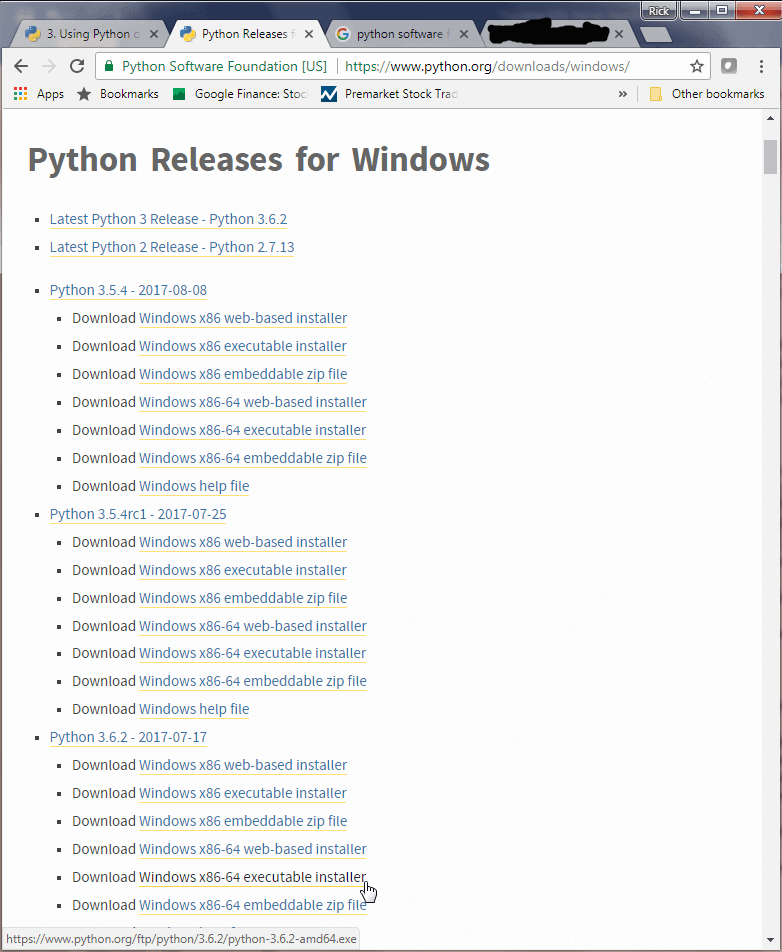 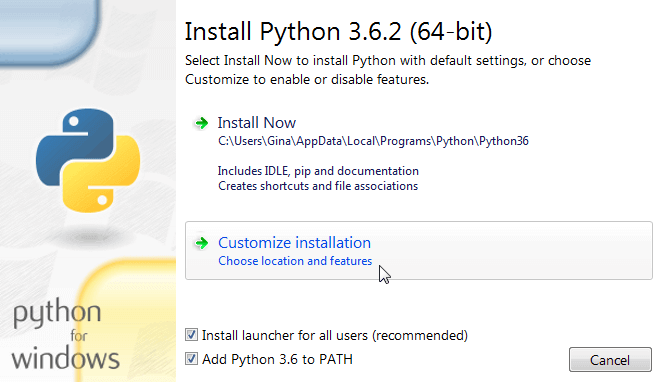 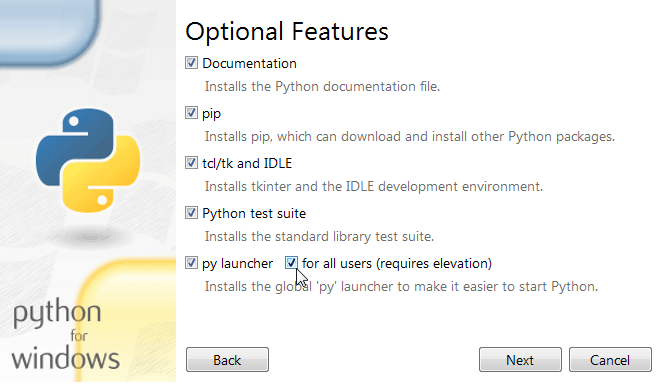 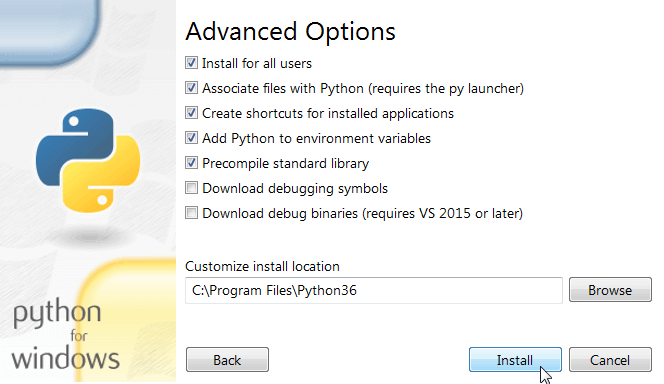 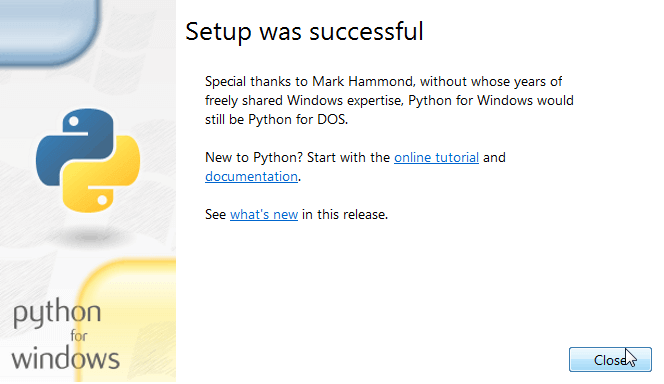 Demonstrating a sample Python script from a normal Python environment

The Python software downloads with documentation on the Python language and its environment. The documentation includes many sample scripts. I adapted one of these scripts for finding odd and even numbers. The following screen shot shows the adapted script in the IDLE environment; this development environment is available with the Python download.

Notice the script includes a for loop, which is roughly like the while loop in T-SQL. This particular script loops through numbers from 2 up to and including 9. If the remainder of a number divided by two (modulo 2 or % 2) is equal to 0, then the number is labeled as an even number in the output from the script. Otherwise, the number is labeled as an odd number in the output.

The next screen shot shows the output from the preceding script. When the user chooses Run, Run Module from the IDLE menu, the output is returned to a Python Shell window. The Shell window confirms the output is from the find_odd_even_nums.py script file in the C:\python_programs path. You can put your Python script files anywhere you choose on your hard drive. Notice that the preceding screen shot showing the script's listing denotes the file name and path for the script file in the dialog box's title.

It is not likely that SQL Server developers and administrators will ultimately consume output from Python scripts in IDLE. However, the IDLE application is one of several Python script editors/development environments that facilitates testing and refining Python scripts. Once you get a script developed and unit tested in an application like IDLE, then you can reference the script file with T-SQL code for consumption and display in SSMS.

Running a Python script from a command window

The next-to-last installation screen from the Installing Python on a Server for All Users section indicates the path for the Python code, including the python.exe interpreter, is at C:\Program Files\Python36. The file name for the Python script is find_odd_even_nums.py. Python script files have a py file extension. The path to the script file is C:\python_programs. The Windows batch file for invoking the python.exe application on the script file is run_find_odd_even_nums.bat. The following screen shot shows the contents of the C:\python_programs path and the text of the batch file in that path for running the Python script file. 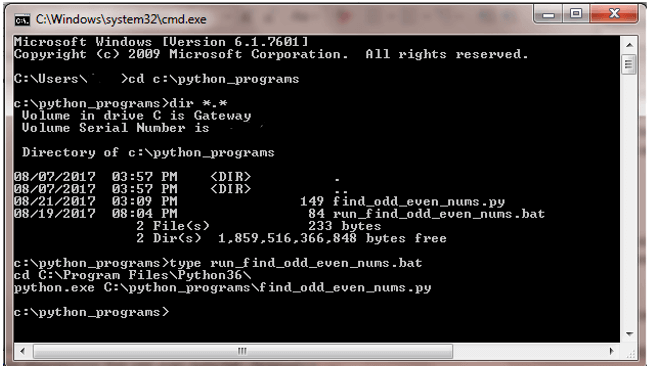 The next screen shot shows the output from running the run_find_odd_even_nums.bat file. The output includes two key lines: one to change the directory to c:\python_programs, a second to invoke the python.exe file from the c:\Program Files\Python36 for the python script. After these two key lines, you can find the output from the python script, which is comprised of eight lines of text that identify the numbers 2 through 9 as even or odd.

Running a Python Script from SSMS

The Window batch file from the preceding section can be adapted for use inside of SSMS. You can run the Windows batch files from SSMS with the aid of the xp_cmdshell extended stored procedure in the master database. The extended stored procedure creates a Windows command shell and passes in a string for execution, such as the contents of the run_find_odd_even_nums.bat file from the preceding section. Output can be returned as rows of text in a result set within SSMS.

The following screen shot shows the code and output for invoking the run_find_odd_even_nums.bat file from within SSMS. The code and its result set comprise a proof of concept about key elements for invoking python scripts from within SSMS. Some tweaking may be required if a DBA deploys the approach to a small team of developers. The Next Steps section includes a walk-through of step-by-step instructions to enable invoking the xp_cmdshell extended stored procedure from a standard SQL Server login.

Notice the code executes from the master database context. The invocation of the run_find_odd_even_nums.bat file by the xp_cmdshell extended stored procedure appears on line 15 within the SSMS code window. The output from the execution of the batch file appears in the Results tab below the code window within SSMS. For example, the Results tab shows a change directory batch command to the python.exe interpreter path in row 2, and the invocation of the interpreter for the find_odd_even_nums.py script file shows in row 4. The output from the run of the script file is in rows 5 through 12 of the Results tab.

Selected key points worthy of your attention include these. 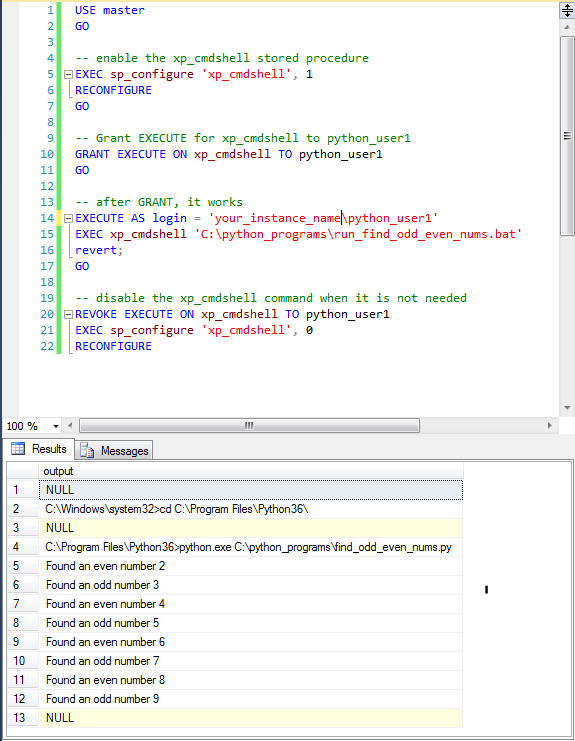 Getting Per Session Wait Statistics in SQL Server 2016