In this tip, we will look at how group Managed Service Accounts (gMSA) can help solve these problems.

Group Managed Service Accounts solve the problem of one-to-one relationships between MSA and Computer. This is done by making use of Active Directory Security Groups to allow a one-to-many relationship between an account and the computers.

To be able to make use of Managed Service Accounts with SQL Server there are certain prerequisites that need to be met, these are as follows:

If you are using Windows Server 2012 R2 as the operating system, for SQL Server to be able to use a gMSA as its service account KB 2998082 needs to be installed.

Prior to being able to create a gMSA in the domain, the Key Distribution Service needs to have a root key in place to function. This is completed by issuing the following PowerShell command:

If there is not a valid KDS Root Key then use the following to create one:

Be aware that even with the EffectiveImmediately configuration switch it can take up to ten hours for the key to become active and allow the creation of the group Managed Service Accounts.

Installation of the AD PowerShell module on a server operating system is done using the following PowerShell command.

If you need to install the Remote Server Administration Tools (RSAT) onto a Windows 10 workstation then they can be downloaded here.

The following commands are used to create the group, add the computer objects as members of the newly created group, then check the group members. Alternatively, this can be done via the Active Directory Users and Computers admin tool.

There are two important things to account for in this process. When adding the computer objects the name of the computer account needs to be suffixed with a $ and in order to force the group membership to be picked up the computer needs to be restarted.

Once all the prerequisites are completed the account can be created using PowerShell, this is achieved with the following command:

You will notice here that the group created earlier is specified for the PrincipalsAllowedToRetrieveManagedPassword parameter, as well as being able to specify how often the password should be rotated. Now that the gMSA has been created it can be used by the SQL Server services on our servers.

Once the gMSA is set up and linked to the computer, it is time to use this as the service account for SQL Server. There are two options for updating the service account details. The first is to use the SQL Server Configuration Manager tool. In this instance you will need to make sure that the “Service Accounts” object type is selected for account validation: 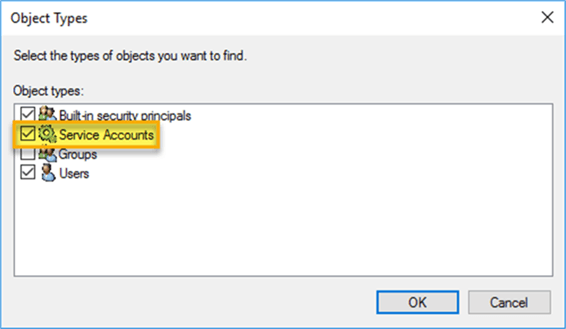 The other option, and the one that I prefer is to make use of the Update-DbaSqlServiceAccount cmdlet from the DBATools PowerShell module. By making use of the DBATools module, you can easily script the entire process – from MSA creation all the way through to implementation.

When using this cmdlet, it is important to remember to qualify the account with the domain name, as well as appending the account name with a $ (which denotes it as a gMSA).

Here we have looked at how to set up SQL Server to use a gMSA as its service account and be able to take advantage of the capabilities that come with it. This includes easy password rotation using the Reset-ADServiceAccountPassword, managing SPNs and ensuring it is restricted to the server that it is linked to.

It is important to remember, however, there are some limitations, notably that SQL Server 2014 or higher is required to support the use of gMSAs. However, unlike MSAs gMSAs can be used with Failover Cluster Instances and are a great option for Availability Group scenarios.

When setting up SQL Server to make use of Managed Service Accounts you should check out these additional tips that cover a range of recommended practices.