You need a database solution for your application, but you don't want to purchase additional database licenses if you don't need to. Before selecting a database platform, a colleague tells you about the SQL Server 2017 Express edition, but you have many questions prior to deciding to use SQL Server Express in production.  In this tip I will tell you about the basics of the SQL Server 2017 Express edition and things to consider to determine whether this is the right solution for your application.

We as IT professionals can be specialists in many different technologies and have different roles like Analyst, Developer, Project Manager or Database Administrator just to mention a few. Each of these roles has their own responsibilities, but there is one responsibility that is common to all of these roles. Whatever your role is, you as an IT professional must find amongst different options the solution that best meets the requirements and one that minimizes costs and maximizes benefits.

Imagine yourself in the role of a Database Specialist. If someone asks you for the best SQL Server edition to use for a project I assume you would say SQL Server 2017 Enterprise edition. But the answer to the question will probably change if you have a limited budget. In such case, the first thing that will come to mind is to use the Standard edition instead of the Enterprise edition, but even though the Standard edition works for most projects, is it really the right solution?

There are many DBAs that will laugh at you if you tell them you have a SQL Server Express running in production. They may think the Express edition is a joke, especially those new to SQL Server that do not know the evolution of SQL Server Express, but parrot other people’s opinions based on using the MSDE Engine in the past.  SQL Server Express has come along way.

SQL Server Express, which you can download from this link, https://www.microsoft.com/en-us/sql-server/sql-server-editions-express is a scaled down edition of SQL Server.  Its origins go back to the years of SQL Server 7 and SQL Server 2000, but in those days SQL Server Express was called MSDE (Microsoft SQL Server Data Engine). As a side note, some people say MSDE stands for Microsoft Desktop Engine, but in my opinion, they are wrong because MSDE is an application intended for data management which has nothing to do with the Windows Desktop.

In the late 90’s Microsoft had two database applications, Access with its JET engine and SQL Server that Microsoft bought from Sybase. Both were relational databases and ANSI SQL compliant, but there was one huge difference between them. SQL Server was (and still is) a native Client Server solution, but Access and its JET engine was a desktop only application. Basically, the main problem with the JET engine is that it does not provide remote access to the database other than by using a file share, because it does not allow network connections to the database. And of course, the remote machine that intended to connect to the JET database, needed to have Access installed. Furthermore, as you may guess from the previous comments, the JET engine did not allow multiple connections, not even from the machine that is running Access, which is the front end of the JET engine. The reason behind this is simple, a file can only be open for modification once at a time in order to maintain consistent information.

SQL Server Express is free to download and use, and it provides many of the features of the paid, full versions of Microsoft SQL Server (Enterprise, Standard and Web). However, it has technical restrictions that make it unsuitable for some large-scale deployments. Furthermore, the 2017 version of SQL Server Express includes features that were previously only in the Enterprise edition like In-Memory OLTP.

The difference between the full editions of SQL Server and the Express edition includes artificial hardware limits that prevent its usage on large scale applications with high concurrent access as well as some limitations in features. 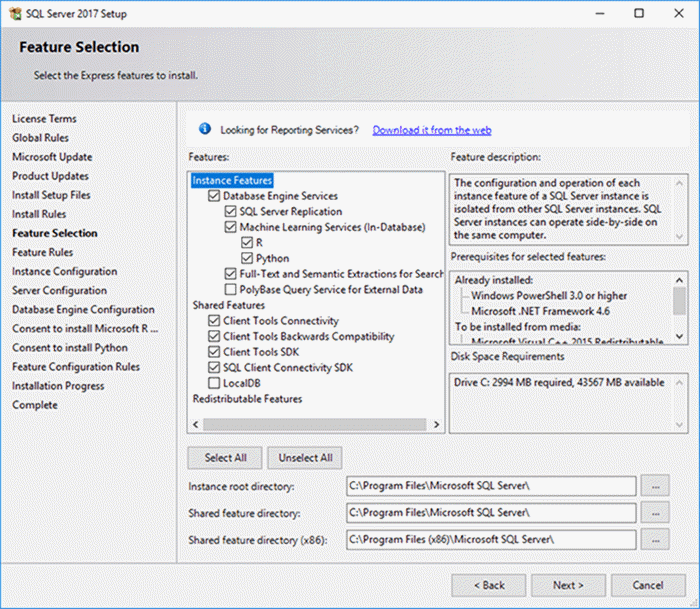 Reasons You Would Use SQL Server Express Edition

By now, after reading the differences of the Express edition against the Standard and Enterprise editions, you may be asking yourself about the motives that will make you choose to use the Express edition of SQL Server instead of some other solution.

Reasons You Would Not Use SQL Server Express Edition

There are some missing features that can be emulated by using additional software and a little bit of ingenuity.