The hierarchyid data type enriches your capabilities for managing hierarchical data relationships, such as the reporting relationships between employees depicted by an org chart.  Business professionals are familiar with org charts as a way of visually depicting who reports to whom in a company.  When there are just a few persons in an organization, then you do not need a database to track the employees or an org chart to show who reports to whom.  However, as the number of employees grows to tens,  hundreds, thousands, and beyond, the reporting relationships become increasingly difficult to track without a database.

The hierarchyid data type was introduced by Microsoft into SQL Server as early as the 2008 version, and its popularity is attracting more attention recently among SQL Server professionals.  Hierarchyid data type values behave similarly to a column of unique values for employees, but the hierarchyid values also represent the position of an employee in the hierarchy of an organization.  The hierarchyid data type encodes the level of an employee in an organization, the depth of an employee relative to other employees in the organization, and even the left-to-right order within an org chart of employees reporting directly to the same manager.  The notion of hierarchical depth encompasses the idea of direct and indirect reporting relationships.  For example, an indirect report to a top-level manager may report directly to an intermediate level manager, who directly reports to the top-level manager.  Indirect reporting relationships can extend through multiple levels within an organization.

The data for employees in the AdventureWorks2014 database is spread across multiple tables with relations between the tables.  The following database diagram illustrates some fields that can be extracted from the Person table in the Person schema and the Employee table in the HumanResources schema to populate a new flatter table named EmployeeDemo_whyid.  The new table is flatter because it extracts fields from each of the two relational tables into a single table.  This kind of flatter table can help to tune the performance of some queries.  The first example in this tip illustrates how to derive the EmployeeDemo_whyid table from an inner join of the Person and Employee tables.

The Person and Employee tables can be readily joined because both tables have the same primary key value named BusinessEntityID.  While BusinessEntityID values can track individual employees across multiple tables, they do not encode any information about the hierarchical relationships between employees.   On the other hand, hierarchyid values do encode information about the hierarchical relationships between employees.  The EmployeeDemo_whyid table has the following columns and sources.  Each row in the table represents an employee. 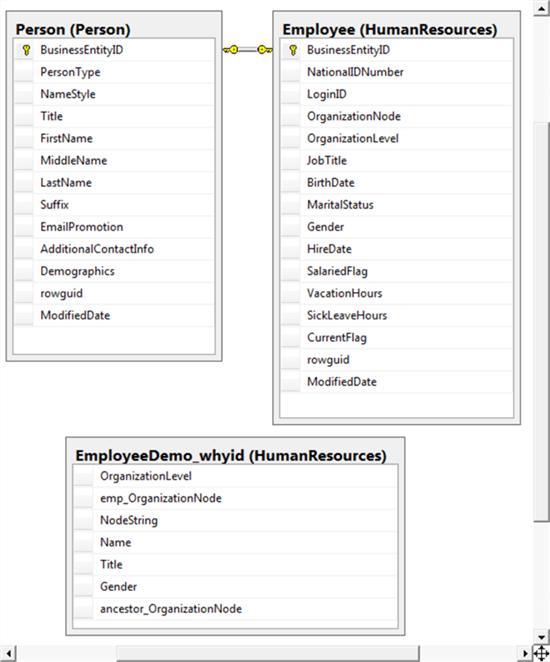 The following script shows the T-SQL code for creating and populating a fresh copy of the EmployeeDemo_whyid table from the Employee and Person tables in the AdventureWorks2014 database.  The code has three major segments.

The middle segment performs the inner join between the Employee and Person tables based on BusinessEntityID.  This field is defined as an int data type, and it denotes different types of persons, such as sales contacts and employees.  The purpose for performing the join is to bring the FirstName and LastName columns from the Person table into the joined result set with other fields from the Employee table as well as other fields computed explicitly for the EmployeeDemo_whyid table.

Next, a set of columns for the result set are computed via a series of item fields in the list for a select statement.

The final segment displays a list in breadth-first order.

The next screen shot shows the first thirty-four rows of output from the preceding script.

The emp_OrganizationNode column displays the hexadecimal characters for the hierarchyid value associated with an employee.  Ken Sánchez has a hex representation of 0x to denote a hexadecimal value of zero; this hex value corresponds to a bit steam composed of eight zeroes.  The next listed employee is Terri Duffy.  She has a hex representation of 0x58; the bit stream for the two hex digits of 5 and 8 combine into a single byte of 01011000. 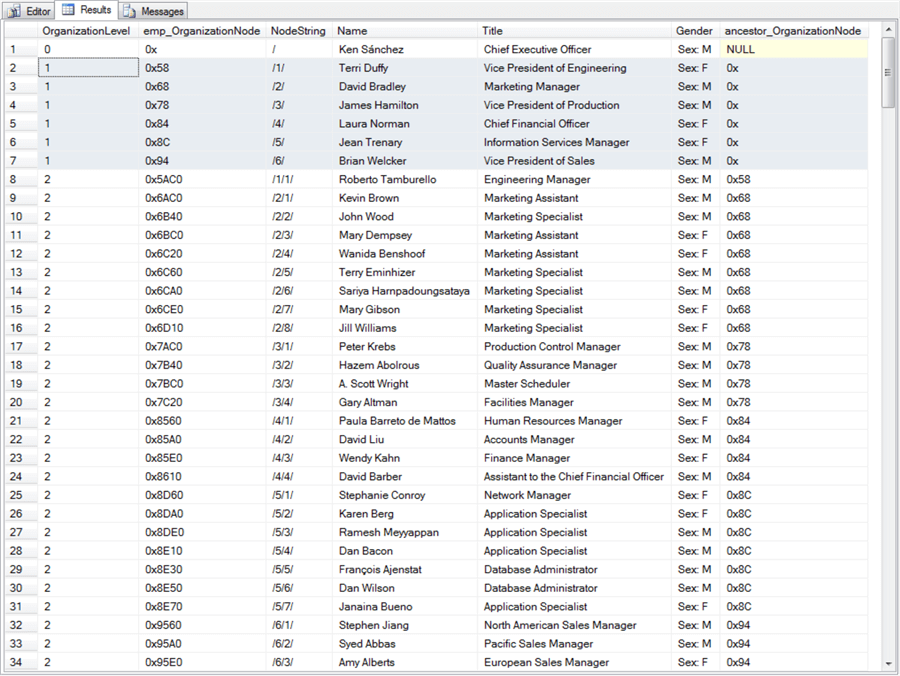 As with the script for the previous section, there are three segments to the script.

Here’s an excerpt from the output generated by the preceding script.  The excerpt displays the first twenty-four rows of output.  This output starts with the root node for the CEO.  The next twenty-three rows are for two separate branches off the root node.

This section presents the basics of how to create a list of employees from SQL Server that you pictorially display as an org chart in Excel.  You can show just the top managers within an organization by querying with SQL Server for the CEO and those who report directly to the CEO.  Next, you can create with Excel an org chart image for these employees that portrays their names, titles, and reporting relationships.  This section describes how to accomplish these tasks.

The following query returns just the CEO and those who report directly to the CEO from employee data in the EmployeeDemo_whyid_wman_names table.  The where clause restricts the result set to employees on levels 0 and 1 of the employee hierarchy.  The employee on level 0 is the CEO.  The employees on level 1 are the direct reports to the CEO.  The order by clause sorts the rows in the result set by hierarchyid values in the emp_OrganizationNode column.

Here’s a result set from the preceding query.  It contains just seven rows  -- one for the CEO and six more for the direct reports to the CEO.  The Name and Title columns are highlighted.  The ancestor_Name column confirms that each of the employees in rows 2 through 7 report to the CEO, Ken Sánchez.  The six employees in rows 2 through 7 are all the employees on the second level of the employee hierarchy.  The rows are ordered by the emp_OrganizationNode column values.  The screen shot displays hexadecimal characters (0…9, A..F) in the emp_OrganizationNode column, but SQL Server stores internally the bit stream equivalence of these characters.  The order by clause directs SQL Server to sort rows by the numerical equivalence of the stored bit streams.

The following screen shot shows a completed org chart in Excel based on the data in the Name and Title columns from the preceding screen shot. 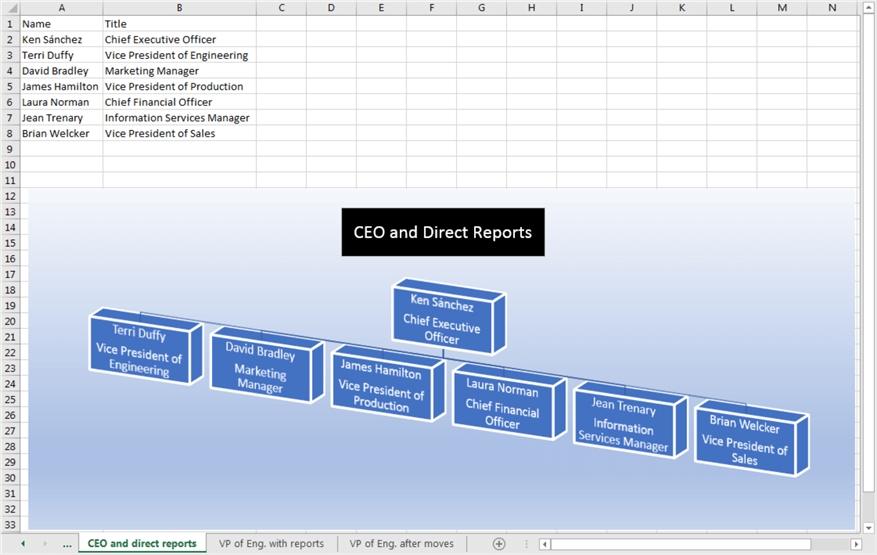 Add an org chart template to an Excel tab with these steps. 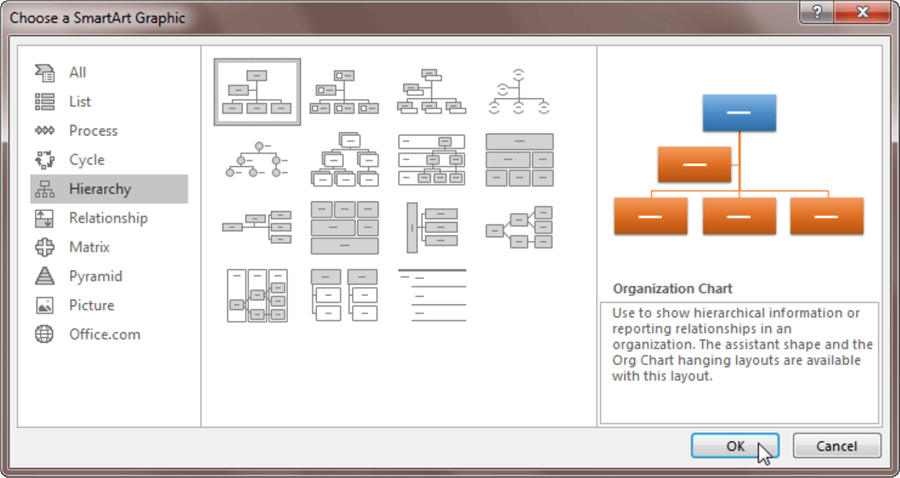 Next, you can format and populate the template. 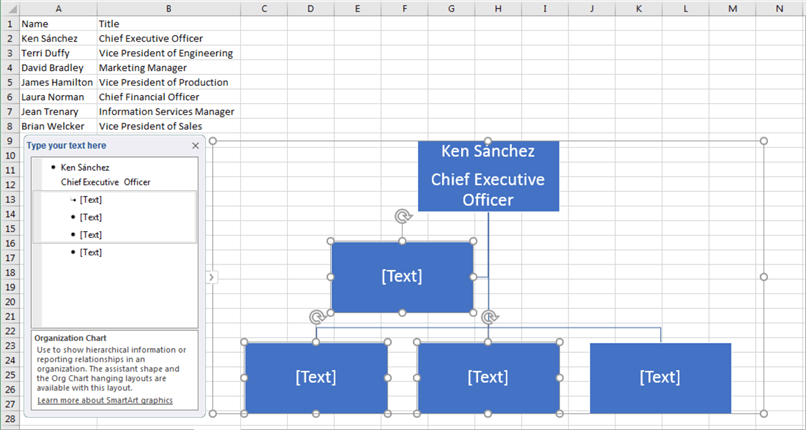 Next, select and delete all boxes except the box in the bottom right-hand corner.  Then, copy the contents from cells A3..B8 to the [Text] prompt in the T dialog.  This step copies the contents from each of the selected rows into a corresponding box within the org chart; the populated boxes appear below the CEO box.  The following screen shot shows the boxes with unformatted contents.  Then, just format the contents of the direct report boxes in the same way that you did the contents for the CEO box. 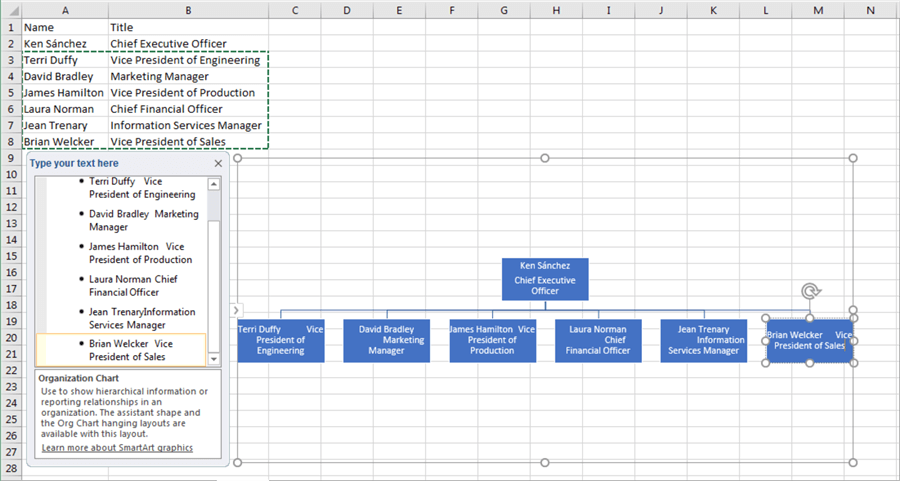 After formatting the contents of the direct report org chart boxes, your org chart is essentially completed in a basic way.  However, there are lots of formatting options that can enhance the appearance of the basic org chart for presentation in a group meeting if that’s the goal.  For example, right-clicking  anywhere inside the org chart, selecting Style, and then clicking the Brick Scene chart icon converts the basic chart so that it may be more suitable for a group meeting.  See the screen shot below for a visual demonstration of the last of these steps.  This tip leaves the discovery of more formatting refinements up to you to explore and use on your own. 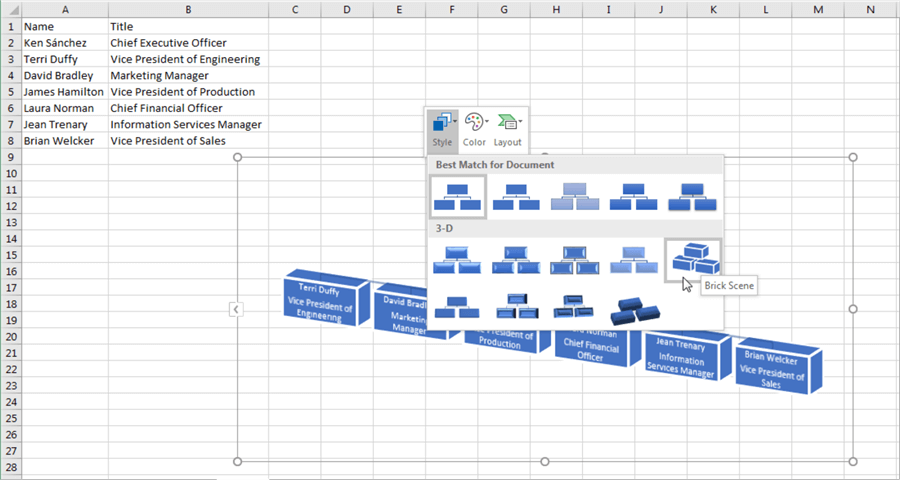 The prior section was for querying and making an org chart for the top level of manager/employees within a company at both level 0 for the CEO and level 1 for the CEO’s direct reports.  Although the order by clause references the Emp_OrganizationNode column, the org chart is a breadth-first chart.  This is because employees were included in the chart only if they belonged to either the first or second level within an organization.  The chart portrays the breadth of employees comprising the second level from Terri Duffy through Brian Welcker.  The use of the Emp_OrganizationNode in the order by clause merely ensures that employees appear based on their hierarchyid value from left to right.

Here’s the result set from the preceding query.

The next screen shot displays the data from NodeString, Name, and Title columns in the preceding result set along with an org chart created within Excel for the copied data. 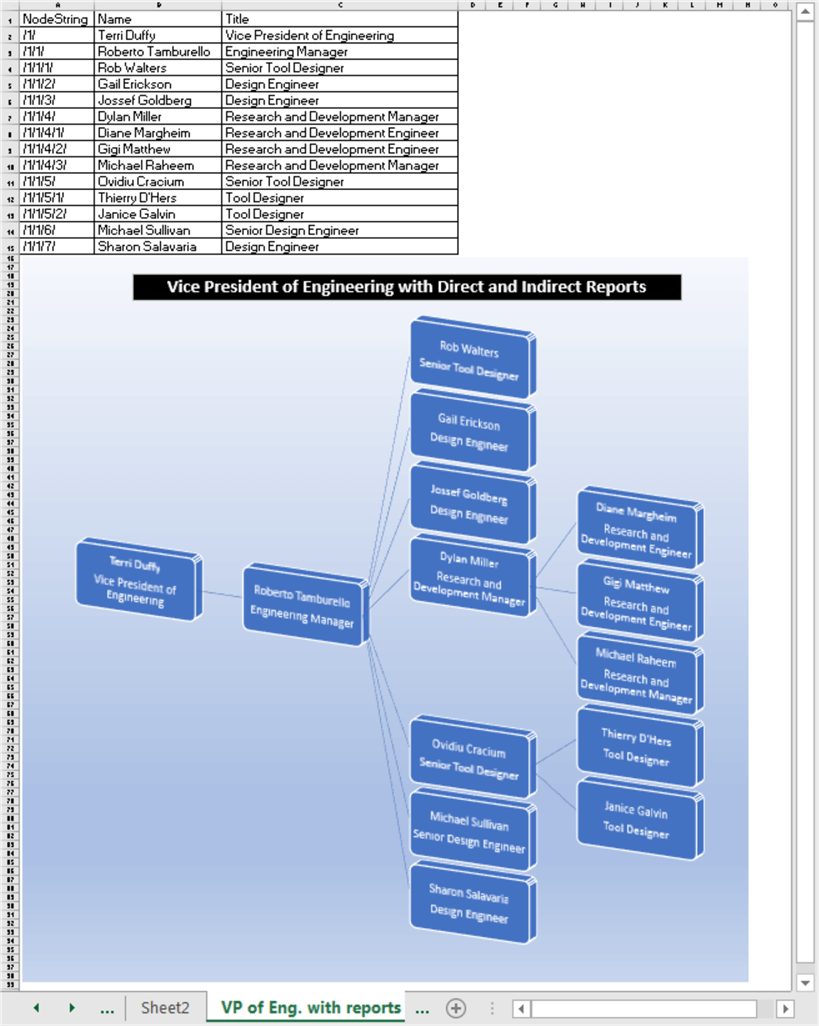 What follows is a selection of step-by-step screen shots for creating an org chart like the one in the preceding screen shot.

Here’s a screen shot showing the selection of the horizontally oriented org chart.  Recall that you get to this dialog by choosing the Illustrations menu item from the Excel Insert menubar, and then the SmartArt icon to open a dialog from which you can select Hierarchy in the left-had margin.  The screen shot below shows the horizontal org chart template selected.  Clicking OK opens a template for the horizontal org chart on your workbook tab.  The red rectangle around the two nodes in the bottom branch is for discussion purposes.

Here’s another screen shot of the org chart in the process of preparation. 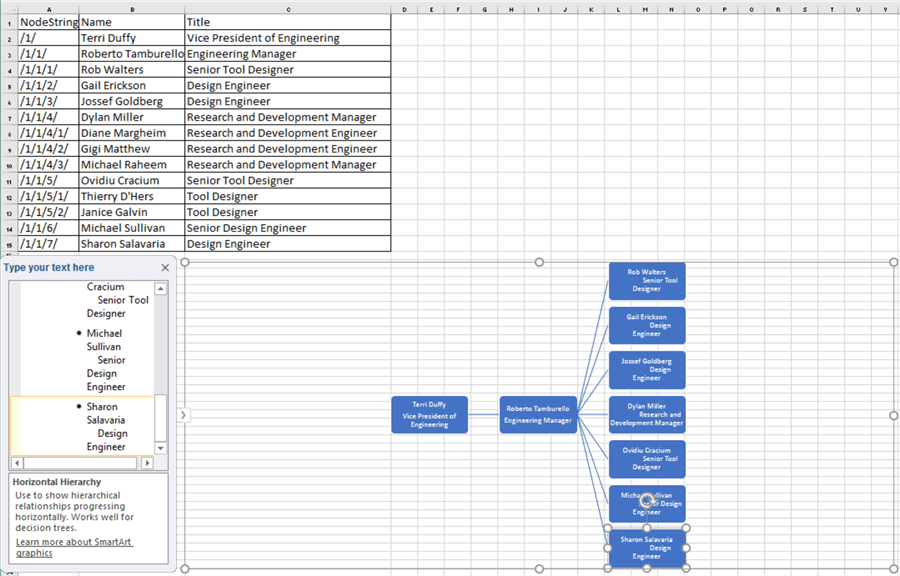 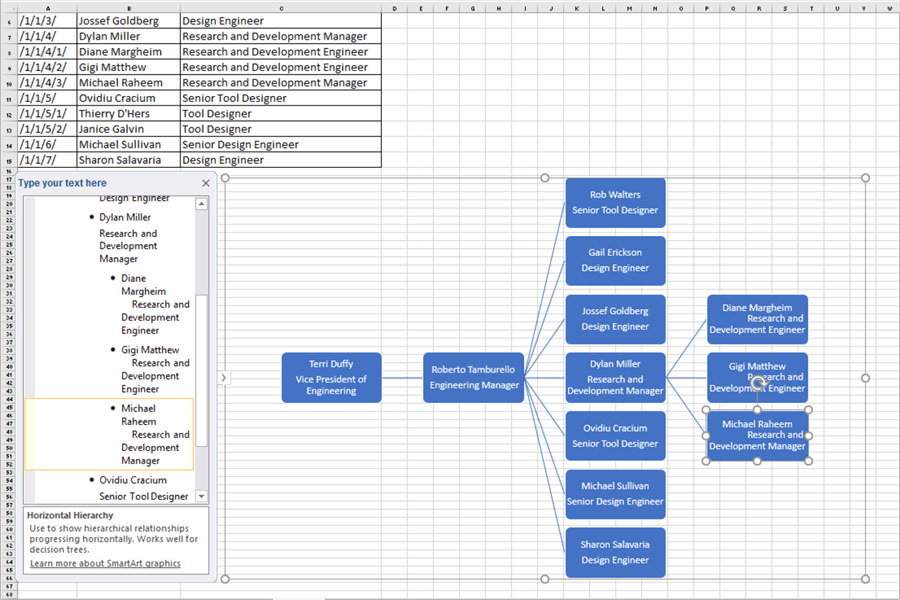 It is important to know how to modify org charts because the employees in an organization and their reporting relationships are regularly in flux.  The hierarchyid data type offers at least a couple of approaches to facilitate changing hierarchical links among employees.  Changing hierarchical links means specifying that one employee node changes its parent node from an old node to a new one.  This section mentions both approaches and demonstrates the basics of how to use one of the approaches.

Let’s consider a case where we want to move two employees in a hierarchy.  The following table provides an overview of the employee hierarchy before and after the assignment of new parents for two employees, namely Michael Raheem and Gigi Matthew.

The process for implementing re-parenting based on the move of an employee consists of six steps.

The following code listing is the T-SQL for the steps listed above.  The code is designed to be executed twice.

Given that the EmployeeDemo_whyid and EmployeeDemo_whyid_wman_names tables are freshly populated, respectively, by the scripts in the "Querying and joining a table with hierarchical data to a table of relational data" and "Adding Manager Names to an employee table" sections, you can expect the following result sets from running the preceding script starting with step 1.1.

After re-configuring the preceding script to start with step 1.2 instead of step 1.1 and running the code again, you get the following result sets.