Attend this webinar to learn about development best practices for SQL Server. Andy Warren will share his many years of experience to give some pointers on what has worked best for him and how you can utilize some of this knowledge.

We seek examples showing how to program bill of material applications with the SQL Server hierarchyid data type. Our database development team has recently been charged with upgrading the tracking and displaying of the assemblies and components used in making manufacturing goods for sale by our company. Our process for making finished goods is roughly like the AdventureWorks company so please use the AdventureWorks database in your demonstration examples.

A bill of materials is often referred to as a recipe for making finished goods. The AdventureWorks company manufactures three subcategories of bikes in ninety-seven specific models for sale to its customers. The bill of materials for each bike is comprised of a hierarchical list of assemblies and components. Each assembly is made up of a collection of components across a hierarchy of levels. The components from earlier levels become assemblies with new components until there are no new components at the next level. Each bike manufactured by the AdventureWorks company has its own series of assemblies comprised of components that specify a recipe for making the bike.

Microsoft introduced the hierarchyid data type to facilitate the designation and querying of hierarchical relations within SQL Server. However, it did not illustrate how to use this data type with the AdventureWorks bill of materials table. Instead, you are left to use the less rich capabilities of recursive CTEs. See this link for an illustration of this approach.

The hierarchyid data type is a standard for encoding and representing hierarchical relations with either of two equivalent formats -- hexadecimal characters or slash-delimited decimal values for denoting the position of nodes in a hierarchy. Within a bill of materials application, the nodes correspond to assemblies and components.

A prior tip (An Introduction to Representing and Querying Data with the Hierarchyid Data Type) presents the basics of creating and querying hierarchical data sources with the hierarchyid data type, but the tip did not focus on bill of material applications, which are widely used in manufacturing contexts. This tip leverages the prior tip introducing the hierarchyid data type with examples for creating and querying a bill of materials table with hierarchyid values. In particular, you will see examples on how to

Getting familiar with products, assemblies, and components for a bill of materials

The bill of material resources in the AdventureWorks database consists of a main table (BillOfMaterials) with support from two other tables (Product and UnitMeasure). Two additional tables (ProductCategories and ProductSubcategories) can also assist peripherally in bill of materials applications. These main and supporting tables reside in the Production schema. The BillOfMaterials table contains collections of hierarchically related rows for each finished good. Here’s a summary of columns within the BillOfMaterials table.

The assembly (ProductAssemblyID) and component (ComponentID) columns in the BillOfMaterials table both point to the ProductID column in the Product table. Because the AdventureWorks company manufactures bikes, you can use the Product table to generate a list of all bikes with associated defining features manufactured by the company. Here’s a script that fulfills this role. The script identifies each bike by product name, size, weight, and color. Two additional columns are also included – namely the MakeFlag and FinishedGoodsFlag.

Here’s the first and last forty-three rows in result set from the preceding query. These are enough rows to understand the content in the result set. There is a total of ninety-seven rows in the complete result set. 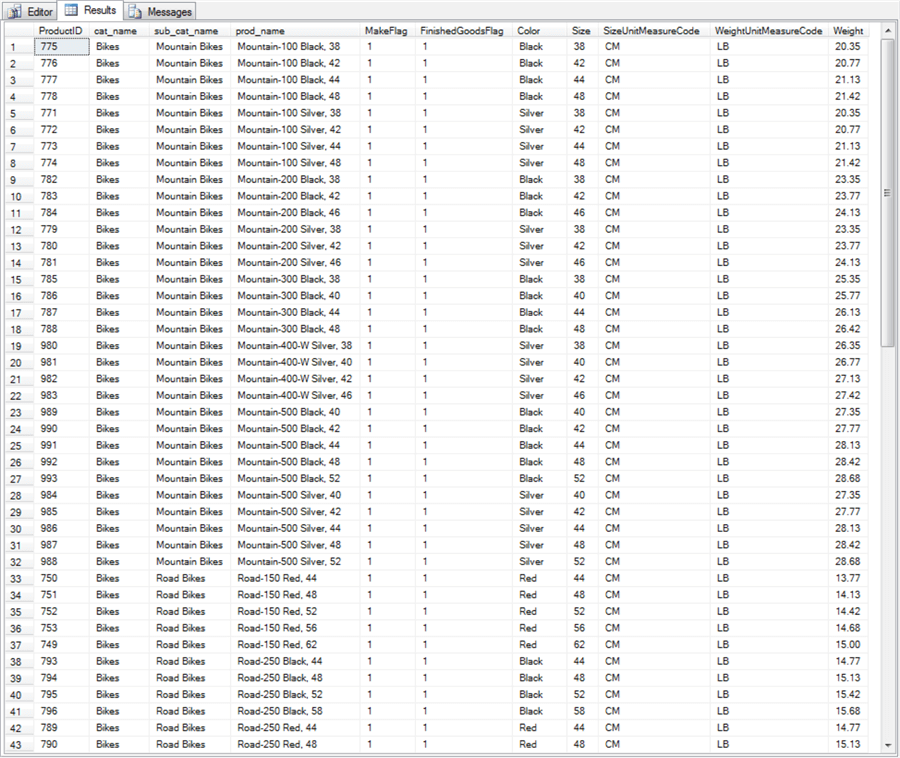 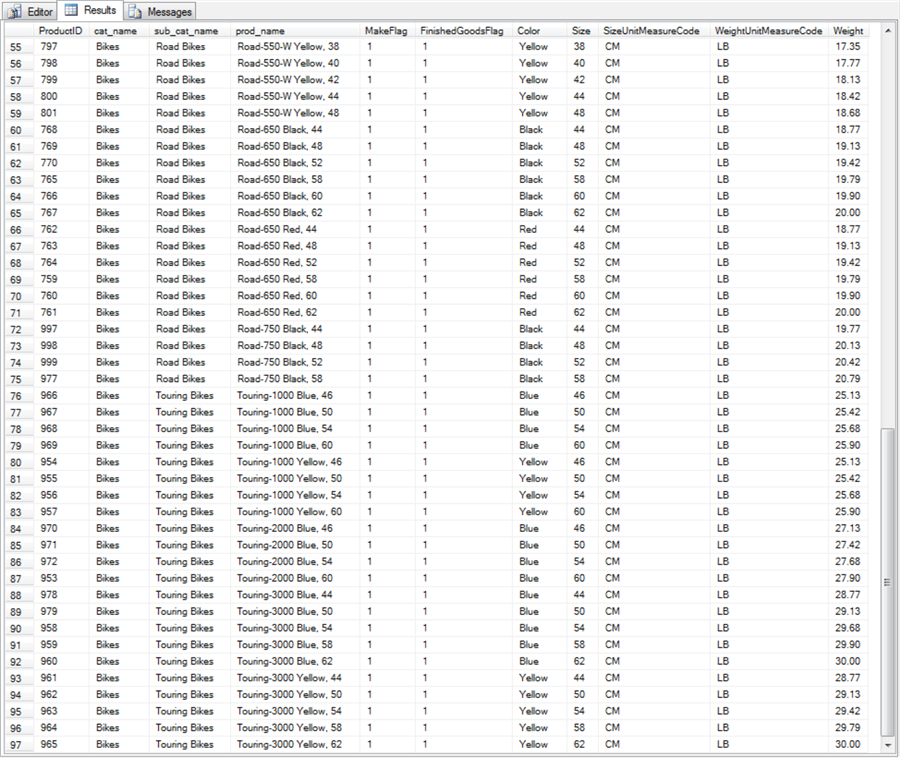 Here’s a query for another selection of product names. The cat_name column indicates all these products are components. The prod_name values include "ped", " Derailleur", or "seat".

Here’s the result set from the preceding query. All these products are assemblies in the BillOfMaterials table, but they have a product category value of components in the Product table. These eighteen products can also be purchased by customers as finished goods – just like bikes. The front and rear derailleur assemblies, which serve a purpose like gears on a car, are made internally. However, the remaining sixteen components are purchased from suppliers to the AdventureWorks company. One of the roles for a bill of materials application can be to facilitate communication between manufacturing firms and their suppliers.

The following query returns the components for the bike with a ProductID value of 775. The filter requiring EndDate values of null ensures that your result set only contains current components.

Here’s the result rows from the preceding query.

Getting all the BOM rows for a product

The prior example displayed the assembly-component relations for the top-level assembly for the bike with a ProductID value of 775. Another more common objective is to list all the BOM (bill of material) rows for a bike. This section presents a process for assigning hierarchyid values to all the BOM rows that pertain to a root node. In the context of this tip, the root node can be any of the bikes manufactured by the AdventureWorks company.

Before diving into the details of how to return all bill of material table rows for a finished good, lets briefly examine the excerpt below with sample output for an AdventureWorks bike. The following Results tab excerpt presents summary information from the process for extracting BOM rows for a finished good. The Results tab below shows five panes – one for each of five queries extracting results from the BillOfMaterials table and associated other tables needed to populate result set columns. The following bullets give highlights about the columns in each result set.

The number of slashes in the Comp_NodeString column is dependent on the BOMLevel. 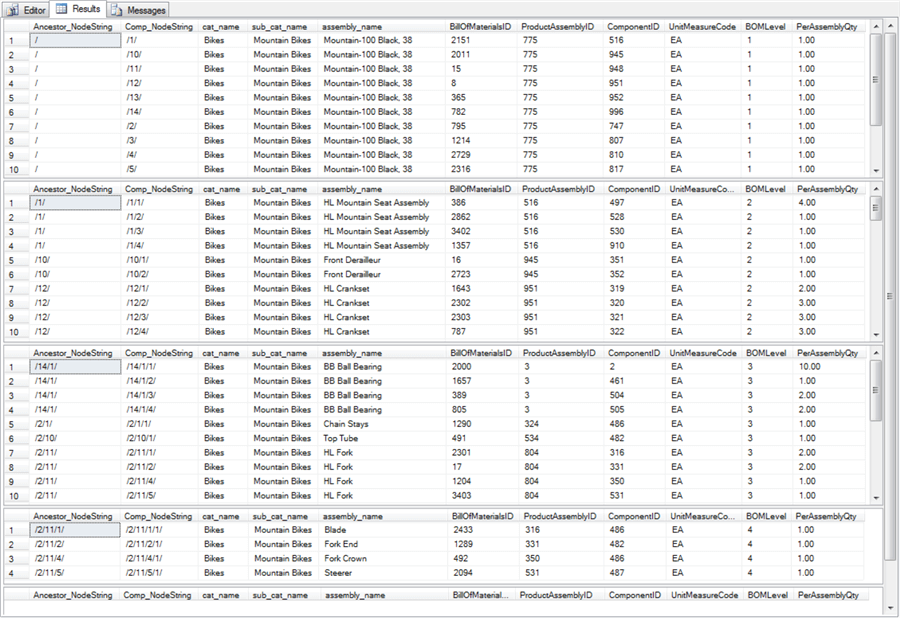 Here’s an overview of the process used to generate result sets like the one described above.

The following T-SQL script contains code for implementing the above process. Because the root node is a local variable to which you can assign a ProductID value, you can readily return results for any of the ninety-seven bikes manufactured by the AdventureWorks company.

It is possible to include some of the iteration described above within a WHILE loop, but I am hoping the walkthrough of the iteration elements will help others to adapt this process to the resource tables for their own bill of material environments. At the very least, this presentation demonstrates that you can derive hierarchyid values for a bill of materials table originally specified by an engineer or a product designer serving in that capacity.

The presentation and discussion of the output from the preceding script appears at the beginning of this section. I did some sample testing of the script to see if it generated valid results for another bike (ProductID 965), and the script appeared to generate valid results. This is because the components for bike finished goods from the AdventureWorks company share highly similar design elements. In your own applications of this approach to BOM applications that you encounter, you should independently assess the degree to which a finished goods collection shares common component specifications.

The following script shows the first forty rows of the concatenated BOM rows with hexadecimal representations for hierarchyid values. 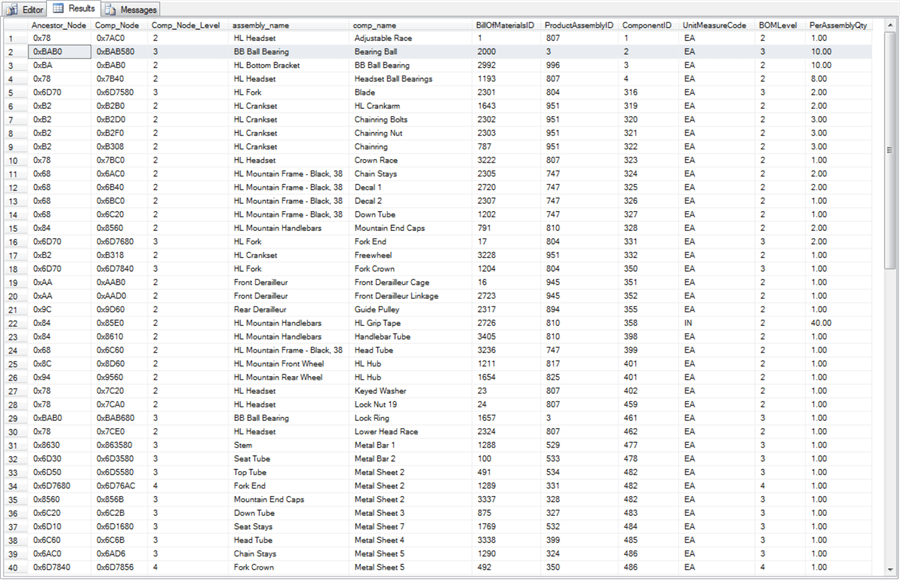 One typical sort for hierarchyid values is to order them by the hierarchy level value that is encoded within them. This sort order displays rows with the lowest level value before showing those with the next higher level and so on. Recall that for both BOMLevel and Comp_Node_Level the top level has a value of 1 followed by 2 for the next higher code level and so forth across subsequent levels. This kind of sort order generates what is called a breadth-first listing of the rows. For a BOM application, the top level is particularly important in the sense that you cannot assemble a finished good unless all the top-level components are in stock and ready to be put together to manufacture a finished good.

The following script shows how to generate a breadth-first list for the BOM rows in the #comps_with_nodes temp table plus the added column to show comp_name. The added column shows the name for the values of the built-in ComponentID column, which shows the ProductID value for the components.

The next screen shot shows an excerpt from the result set generated by the preceding script. There are eighty-nine BOM rows in total for the Mountain- 100 Black, 38 finished good, but only fourteen of these rows have a Comp_Node_Level value of 1. The bike name appears as the assembly name for all top-level rows. All the components in these rows are top-level components in the sense that the bike cannot be assembled without them being in inventory and ready to be assembled in a way that manufactures the Mountain- 100 Black, 38 finished good. A red border highlights these BOM rows while it shows a very simple application of the hierarchyid values in manufacturing applications -- namely, isolating the top-level components. 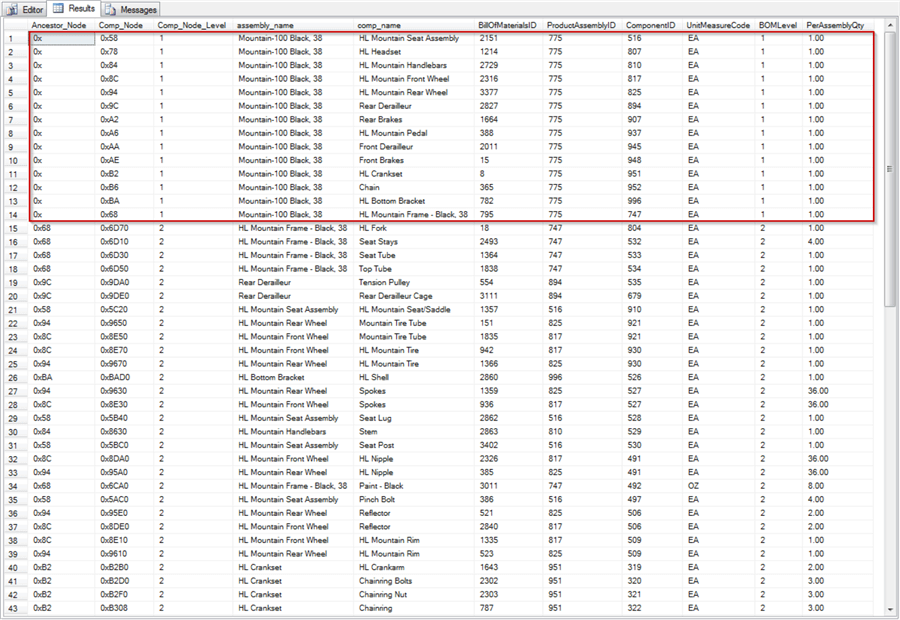 A depth-first listing of BOM rows sorts by the hierarchyid value for their component, which is Comp_Node value in this example. The sort for this kind of listing requires that the hierarchyid value for rows be expressed in a hexadecimal character format. The sort by Comp_Node value arranges components one after the other in the order that they are needed to complete a top-level assembly of the components for a finished good. Assembling starts from the bottom of the order and progresses to the top of the list to generate a top-level component.

Here’s the script for a depth-first list of the BOM rows. Notice that the order by clause references the Comp_Node column.

The next screen shot shows an excerpt from the result set for the preceding script. The block of rows 6 through 30 are highlighted. All these rows pertain either directly or indirectly to the component with a hierarchyid value (Comp_Node) of 0x68, which is for the frame component of the Mountain- 100 Black, 38 bike. 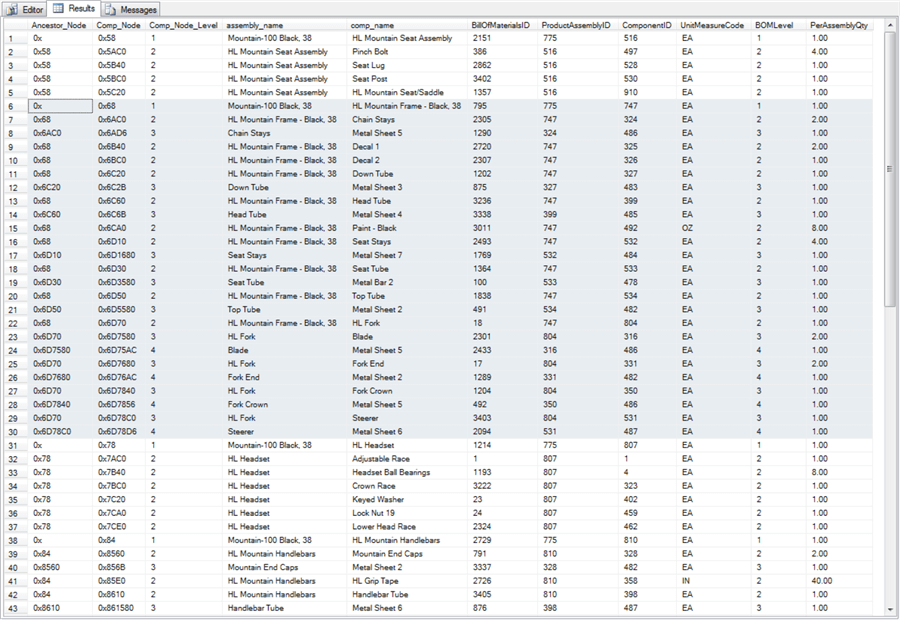 The next query extracts a subset of the full set of BOM rows that are just for the frame of the Mountain- 100 Black, 38 bike. A where clause in the query extracts just Comp_Node column values from rows 6 through 30 from the preceding result set. These are the rows that refer directly or indirectly to the frame component, which is a top-level component for the assembly of the Mountain-100 Black, 38 bike.

The following query mixes the breadth-first and depth-first listing of components and adds a new sort by dimension as well. The first column name in the order by clause is Comp_Node_Level. This column name by itself would implement a breadth-first listing. However, Comp_Node_Level is followed by Comp_Node in the order by clause. As a result, the rows appear in depth-first order within levels. Finally, the third dimension is added via a nested select statement that orders rows by component name. This arranges the components by alphabetical name order within an assembly stage after they are ordered by Comp_Node_Level and Comp_Node.

Here’s an image of the result set from the preceding query copied to a tab in an Excel workbook. 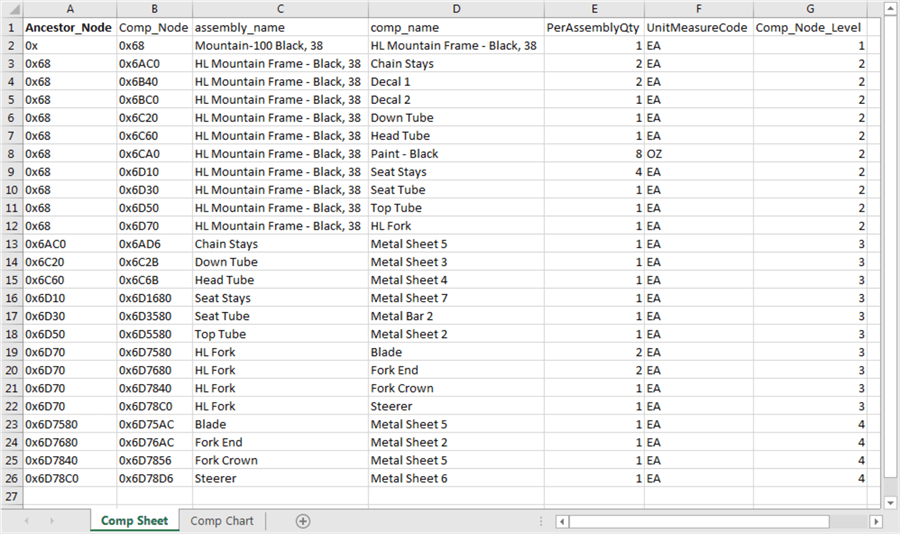 Another advantage of the preceding kind of result set is that it facilitates the preparation of hierarchical charts that show a valid order for assembling components across levels. The following chart shows the preparation of a hierarchical chart for the components with results from rows 2 through 12 of the Comp Sheet tab in the preceding screen shot. 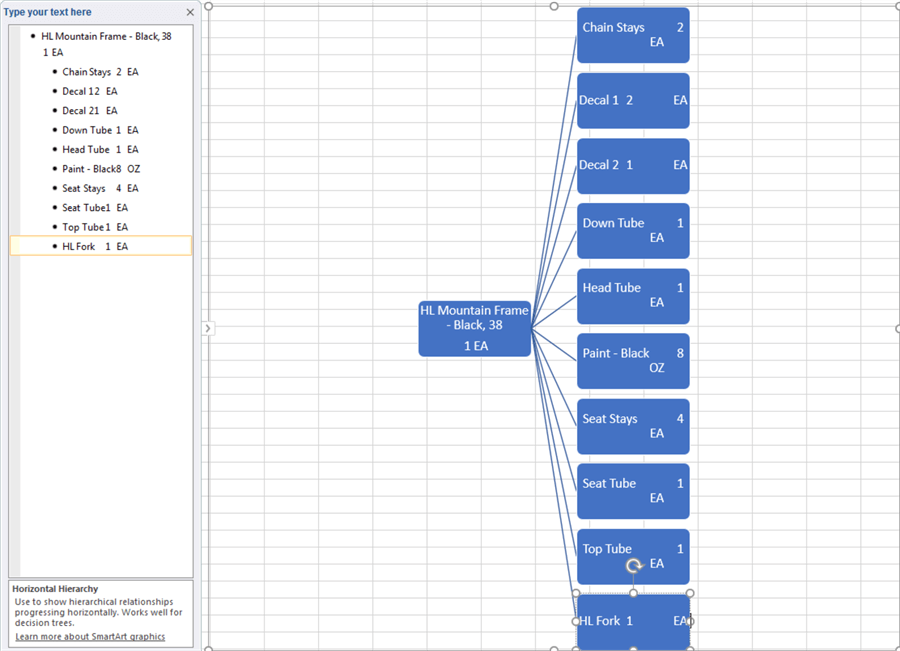 The next screen shot shows a completed hierarchical chart for the components in the Comp Sheet tab; the chart has some formatting to facilitate its presentation. Components are assembled in right-to-left order. 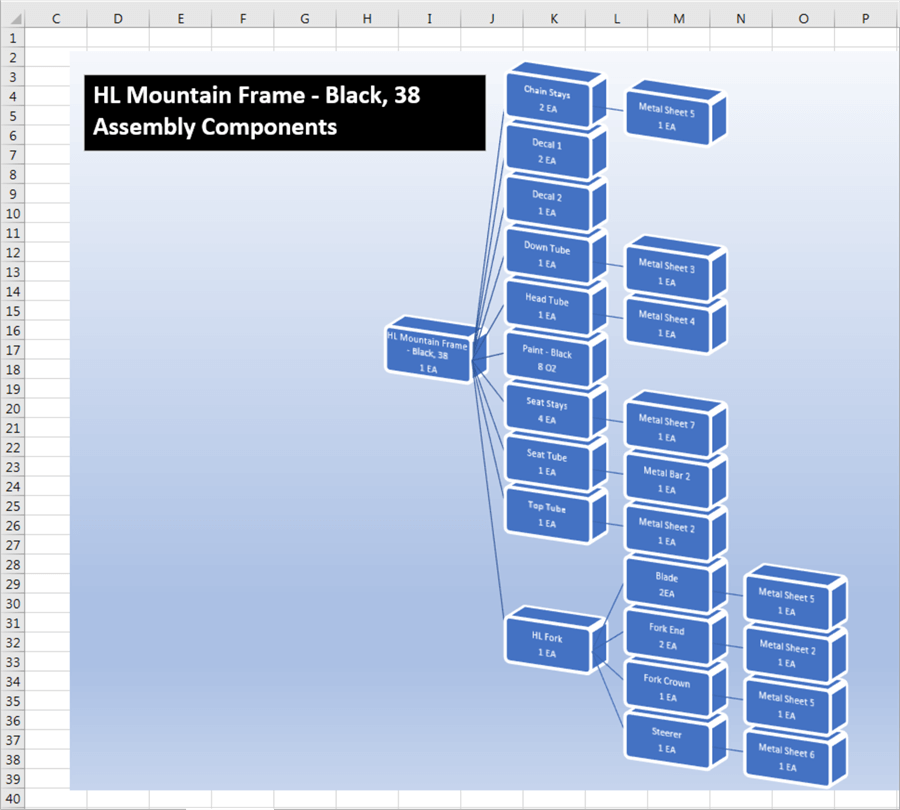