You have read that amongst the five SQL Server system databases (master, model, msdb, tempdb and mssqlsystemresource), the model database is used as a template for new databases including tempdb. Because of this, you wonder what would happen if you replace the model database with an arbitrary user database and how it will affect tempdb.

If we are talking about recovering the SQL Server model database, this is a non-standard approach. Based upon the fact that model database is used as a skeleton for new databases as well as for the tempdb database, I came up with the idea of what would happen if we use a regular user database as a replacement of a missing model database.

The first step is to create a test database named SampleDB. You can use the script below to do it, but make sure to change the location of the files according to your environment.

Now with the next script we create a table and put some data into it.

Now that we have our test environment ready, we need to stop our test instance of SQL Server by using SQL Server Configuration Manager.

After stopping our instance, we have to open the folder where the model database files are located. Please consider that the location depends on your SQL Server version and the choices you made during the installation of your instance. But for the purpose of this tip I will assume the default location of SQL Server for data and log files which is C:\Program Files\Microsoft SQL Server\MSSQL14.MSSQLSERVER\MSSQL\DATA. In that folder we will find the two files named model.mdf and modellog.ldf. We have to rename those files to ORIGINAL_model.mdf and ORIGINAL_modellog.ldf respectively.

If you open a command window on that folder you can rename the files using the following command.

The screen capture below shows the execution of the renames in my console window.

Try to Restart SQL Server without the Model Database

At this point the test instance doesn't have a model database. You can try to start it and you will see that it won't start. In order to confirm that the reason of this failure is that we removed the model database files by changing their name we can open the Event Viewer application, and if we take a look at the Application log we will find out that there is an error event related to our instance of SQL Server. The error in question lets us know that SQL Server was unable to open the model.mdf file as shown in the screen capture below. 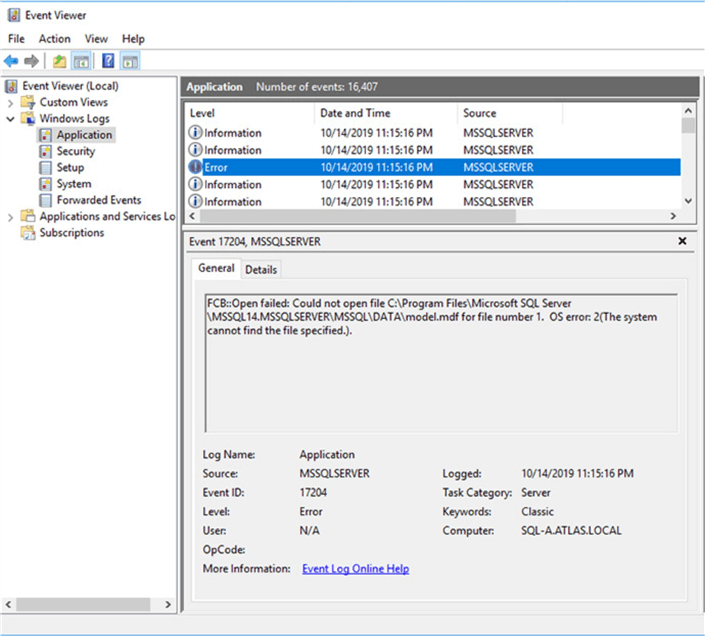 Next, we have to copy the files of the database we created and name them as follows:

If you open a command shell at the folder where the SQL Server data and log files are you can execute the following commands to do the work.

Then restart SQL Server and you will notice that it starts up successfully.

When we take a look at the model database, we see the table and stored procedures that were created in the sample database. 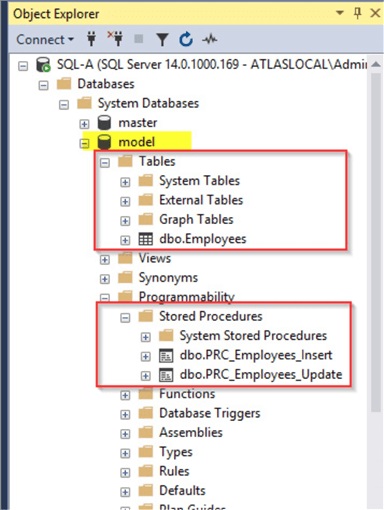 As the image above shows, the model database contains the same objects we created in SampleDB. This should not surprise you because we are using an exact copy of SampleDB. But you may be surprised when we take a look at the tempdb database in the next screen capture. 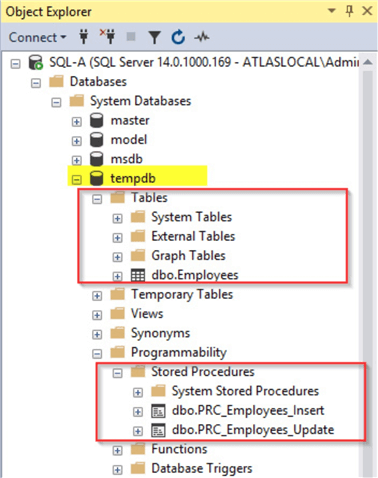 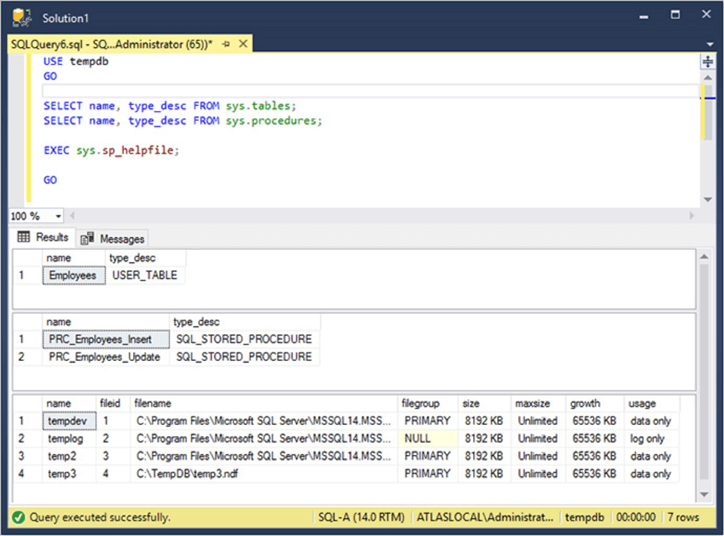 The reason behind this is that the file settings for the tempdb database are stored in the master database and you can see them by querying the sys.master_files dynamic management view. So basically, when tempdb is recreated the first part of the database is created by copying in the contents of the model database. The rest of the tempdb database is then filled with empty pages.

Now let's see if the Employees table in the tempdb database contains the data we inserted early in our SampleDB database.

As you can see in the next image the data in the Employees table persisted. 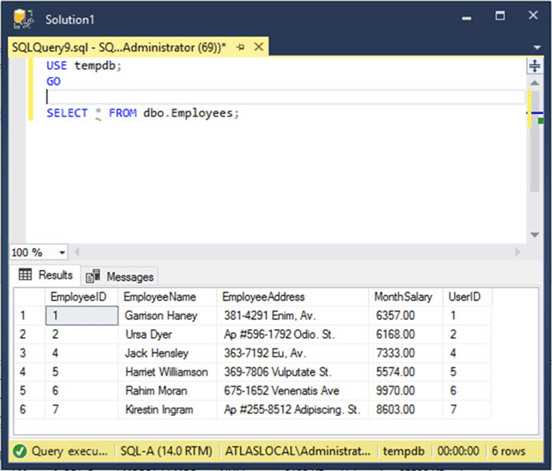 We have seen that using a user database to replace a missing model database is possible.  I am not encouraging you to do so, but as a last resort this is a viable solution.