Integration Services (SSIS) is a mature ETL tool part of the Microsoft Data Platform. It supports a variety of sources and can perform many tasks. However, there's no native support to directly execute a PowerShell script, such as we do have for example for executing SQL scripts. Luckily, there's an easy work around: the Execute Process Task. This task can execute any application or batch file. As such, it can also call the PowerShell.exe executable to execute a PowerShell script.

Executing a PowerShell Script from the Execute Process Task

In this tip we'll use a short PowerShell script to illustrate the implementation in SSIS. There's no need for a complex script, the focus is on the integration in the SSIS package. This sample script takes two integer input parameters, multiplies them and returns the result:

An example of an execution of the script:

With this script, we can test how we can pass input parameters to the script, but also if we can capture the output. 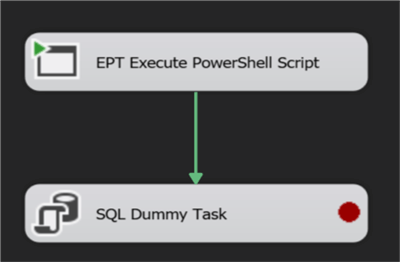 Two package parameters are created for the input variables:

If you're working with the SSIS package deployment model (where parameters are not available), these can be replaced with normal SSIS variables. For the output, a variable is created:

In the example above, the two input variables are hard-coded into the command. To pass the values of the two parameters, we'll need to use an expression. Let's create another variable of the string data type.

The following expression is used:

Keep in mind the command has backslashes (in the file name) and double quotes. Both need to be escaped with a backslash character. Also, the two input parameters need to be converted to string data types (DT_WSTR in the SSIS expression language) so they can be concatenated with the rest of the command. In the Execute Process Task, we need to put an expression on the Arguments property:

You might've noticed the ExecutionPolicy switch is set to Unrestricted in the arguments. Execution Policies are a safety feature of PowerShell and they determine how exactly a script can be executed. More information can be found in the documentation. The default policy on Windows machines is Restricted, which allows commands to be executed but not script tasks. If the Execution Policy is not changed, the Execute Process Task will fail. However, the error message will just complain the process exit code was not expected:

To see the actual error message, we need to ignore the process exit code: 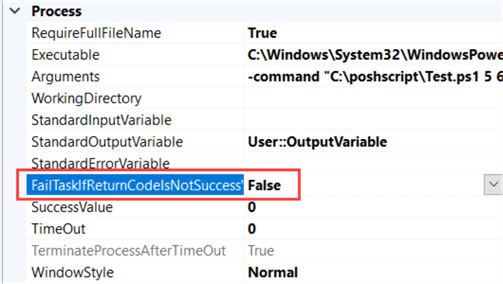 We also need to change the data type of OutputVariable to string, because the error message will be written to this variable. When debugging (put a breakpoint on the Execute SQL Task by selecting it and hitting F9), we can see the error message in the value of the variable:

The error message states the script is not digitally signed and therefore cannot be loaded. To circumvent this, the Execution Policy is set to Unrestricted.

Everything seems to be ready to execute the PowerShell script. However, when executing the package, the Execute Process Task fails with an error message saying the type of the OutputVariable is not correct.

PowerShell tries to assign a string value to the variable, but since it has an integer data type this fails. This is odd, since the output of the script is supposed to be an integer. When we change the data type to string and run the package, we can inspect the value of the variable in the locals window:

Apparently, PowerShell added the \n character (which stands for newline) to the integer value 30. The script works, but it returns a value which cannot be stored in an integer data type. If you wish to use the variable at another location, you might want to clean it up first.

We can execute a PowerShell script in an SSIS package using an Execute Process Task. Using an expression, we can pass input variables to the script. Optional output can be captured in an SSIS variable. There are two caveats: