We are starting to deploy SQL Server on Linux for our new applications. I have only been a Windows Server administrator and have not had any opportunity to work with Linux, but I am familiar with PowerShell for managing Windows and SQL Server. Can I work with PowerShell on Linux?

Windows PowerShell is an extensible command-line shell and associated scripting language built on top of the .NET Framework. Released in 2006, it was originally designed to run on the Windows operating system. In 2016, Microsoft open-sourced PowerShell and called it PowerShell Core - a fork of the Windows PowerShell codebase - allowing it to run on multiple non-Windows platforms such as Linux and macOS. This makes it easy to standardize and automate administration of the Windows and Linux operating systems, including the applications that run on them.

PowerShell Core is supported to run on the following Linux distributions.

To install PowerShell Core on RHEL/CentOS, 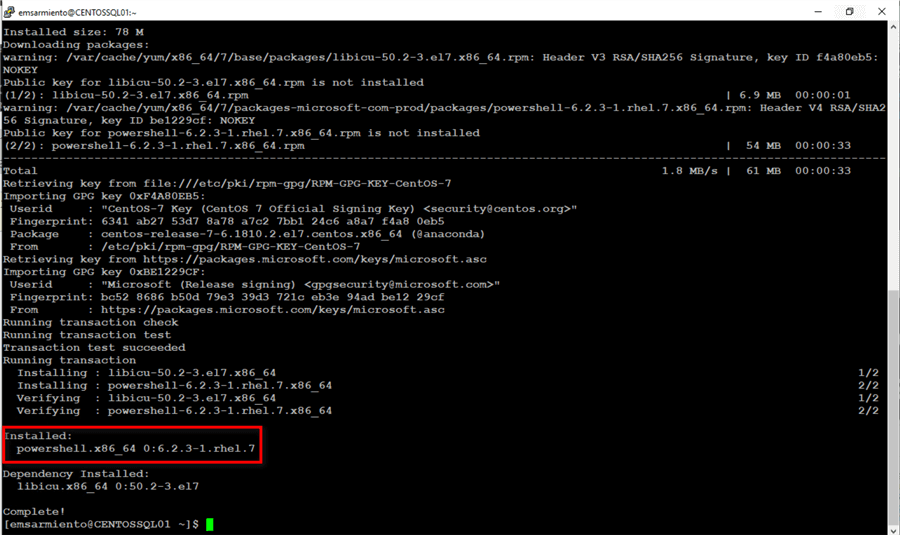 Installation on Ubuntu is a bit different because, unlike in RHEL/CentOS where they are implicitly included as part of the installation process, you have to explicitly define the Microsoft GPG key. To install PowerShell Core on Ubuntu 16.04, 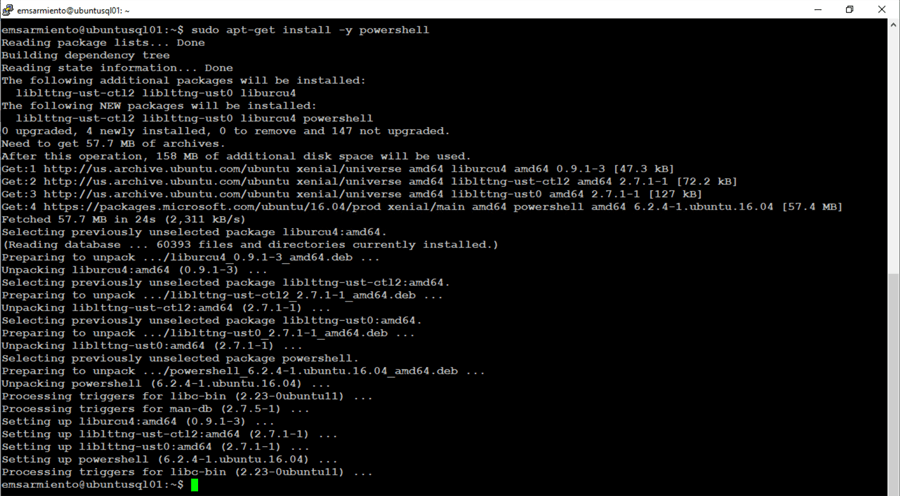 Switching to the PowerShell Core Shell

Once the installation completes, you can run the command below to start PowerShell Core.

You will see your terminal session prompt change, telling you that you are now in a PowerShell Core session.

Since this is no longer a Windows operating system, some of the Windows PowerShell cmdlets are not available. Run the command below to display the different PowerShell Core cmdlets available on Linux.

I always start with these three cmdlets – Get-Command, Get-Help, and Get-Member – when working on a new system to familiarize myself with the available PowerShell cmdlets. It helps when other third-party PowerShell modules are available so I know what I can work with. For example, I can use the Get-Command cmdlet to display the usage of a specific cmdlet. The command below displays the syntax for using the Get-Process cmdlet. It's the same command for both Windows and Linux.

You can also list the available aliases that map to the PowerShell Core cmdlets by running the Get-Alias cmdlet. Listing the different aliases can give you some hints as to whether a command is a native Linux command or a PowerShell Core alias. For example, you might use the cls command on Linux because it's what you've gotten used to on Windows to clear the terminal when you should be using the clear command (I make that mistake a lot when switching between Windows and Linux command-line). The cls command is defined as an alias for the Clear-History PowerShell Core cmdlet.

One of the challenges that you'll face when working on Linux is that the output of commands is in text. This requires a lot of string manipulation especially if you need to retrieve specific string values. In comparison, the output of PowerShell commands are objects. You will see this when you compare the ps command versus the Get-Process cmdlet.

This is not a big deal if you are just working with PowerShell cmdlets. However, since there aren't as much cmdlets on PowerShell Core as there are with Windows PowerShell, you still need to learn basic Linux commands to properly administer the system. Let's say you want to retrieve just the PID of the process running PowerShell Core on your Linux system, running the ps command would look something like this.

It pipes the output of the ps command to the grep command to display the pwsh process. The cut command is used for string manipulation, to "cut" out the sections from each line of output and writes the result to the terminal. Whereas, the equivalent PowerShell command would look something like this.