We have deployed SQL Server on Linux for our new database application. We want to provide a disaster recovery solution that would allow us to automatically restore backups to a secondary instance. How do I configure SQL Server on Linux to achieve this goal?

Regularly restoring database backups on another instance is the only way to check validity of backups. In my consulting work, I have encountered several incidents involving restoring databases from backups only to find out that the backups were also corrupted. It doesn’t matter if you can perform page-level restores as described in this tip when your backups are corrupted. However, as the size of the databases grow, so do the size of the backups. This not only impacts storage requirements but also recovery time objective. Your disaster recovery solution should meet your recovery objectives. One way to achieve this goal is to use SQL Server Log Shipping.

This tip will focus on configuring Log Shipping between SQL Server on Linux instances. Below are the details of the implementation. The servers can access the Internet to download the necessary components. Keep in mind that CentOS Linux is not officially supported to run SQL Server on Linux and is only used for demonstration purposes since CentOS Linux is a community-supported distribution based on Red Hat Enterprise Linux (RHEL), the officially supported distribution. For deployment in production, use RHEL. However, the steps outlined below will work for RHEL.

Here’s a high-level overview of the steps for configuring Log Shipping on SQL Server on Linux:

So, whether you are configuring SQL Server Log Shipping between the same or different operating systems, like from Windows to Linux, these will be the same 3 steps. For the secondary server to have access to the transaction log backups on the primary server, they have to be stored on a network file share. For this tip, we will be using Samba and the Common Internet File System (CIFS). CIFS is an implementation of the Server Message Block (SMB) protocol. It is used to share filesystems, printers, or serial ports over a network and is most commonly used with Windows operating systems. You can think of CIFS as a specific implementation of SMB that Microsoft created. Samba is the standard Windows interoperability suite of programs for Linux and Unix and is based on the SMB protocol. Because of the differences between Unix and Windows, especially among the advocates of both operating systems, a facilitator is necessary to make sure hostility is kept to a minimum. That’s what Samba does. Configuration of Samba and CIFS is key to making Log Shipping for SQL Server on Linux work.

We’ll start with configuring Samba on the primary server. Run the command below to install Samba on the Linux server. 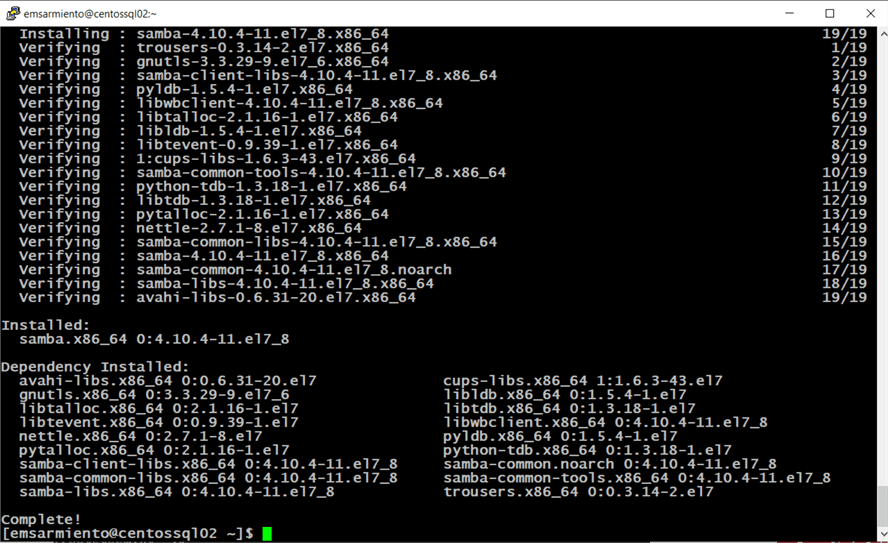 And because the directory is created with root privileges, the root user (and group) owns it.

Run the command below to grant the mssql user the read/write/execute permissions to the directory. The Octal (or numeric) value of the permissions is 0700.

The drwx means that this is a directory and that the mssql user has read/write/execute permissions.

Next, you need to edit the /etc/samba/smb.conf file and add the newly created directory as a network share. The smb.conf file contains the runtime configuration for Samba. This is used to describe the details of a share. The format of a section that describes a share is shown below:

The common parameters that you can include for describing the details of a share are shown below:

A complete list of the different parameters and their corresponding values can be found on the smb.conf documentation. Backup the smb.conf file before you make any modifications to it. It’s easier to revert from backup than to remember the changes you’ve made. Run the command below to create a copy of the smb.conf file. 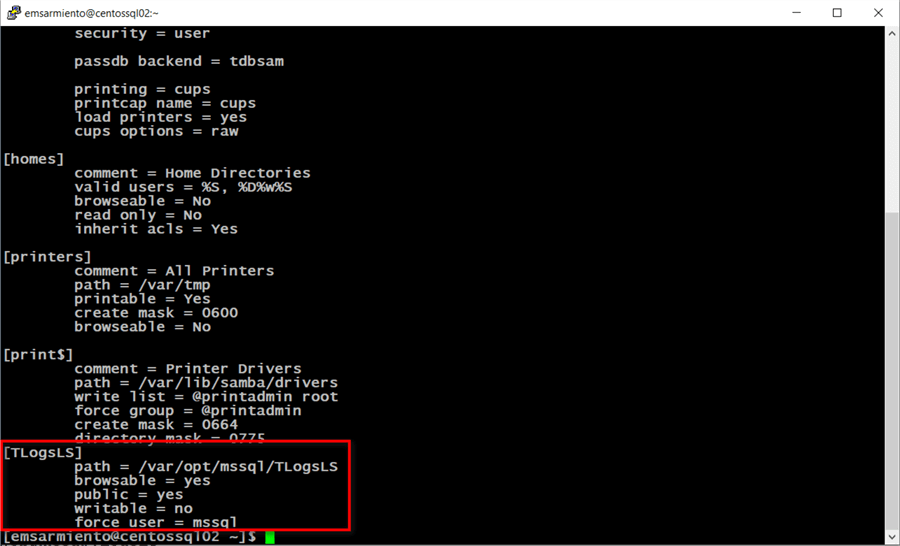 Run the command below to validate the configuration settings in the smb.conf file. 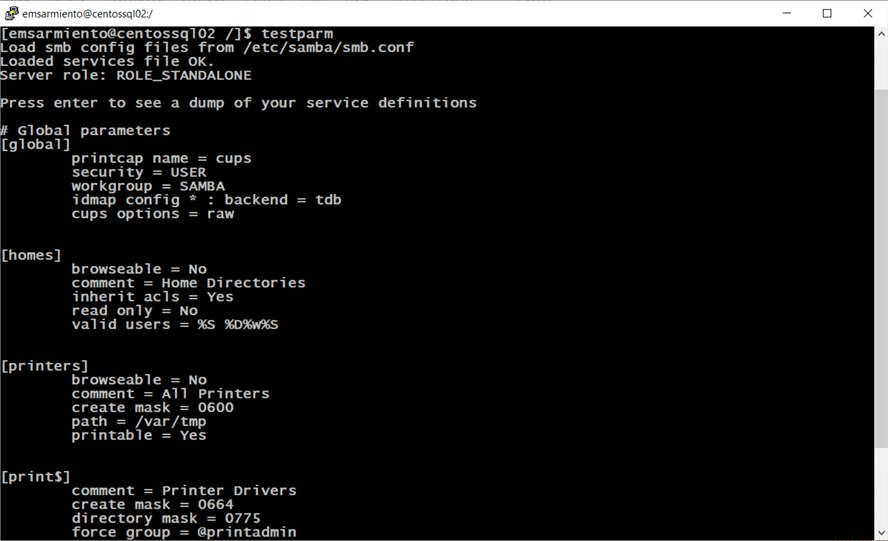 Run the command below to restart the Samba services for the configuration to take effect.

This simply adds the existing mssql user on the primary server to the Samba internal database. If you run this command before the mssql user has been created on the server, you will get an error. You will be prompted to enter a password that you will later use to connect to the shared directory. Take note of the password. You will use this to configure the secondary server.

Configure SELinux on the primary server

Depending on the configuration of your Linux server, you may also have to make configuration changes to SELinux. SELinux is a Linux kernel security module that provides a mechanism for supporting access control security policies. While some would suggest disabling SELinux, it’s not a security best practice. Talk to your security team about the corporate policies regarding SELinux configuration.

A value of Enforcing means SELinux is enabled and policy rules are enforced. You need to add policy rules that would allow Samba. In order to proceed with the configuration you may need to install the semanage utility, the tool you will use to configure SELinux. Attempting to run semanage without installing will get an error message like the one below.

Run the command below to find which package the semanage utility belongs to.

In this example the policycoreutils-python-2.5-34.el7.x86_64 package contains the semanage utility. Run the command below to install this package. 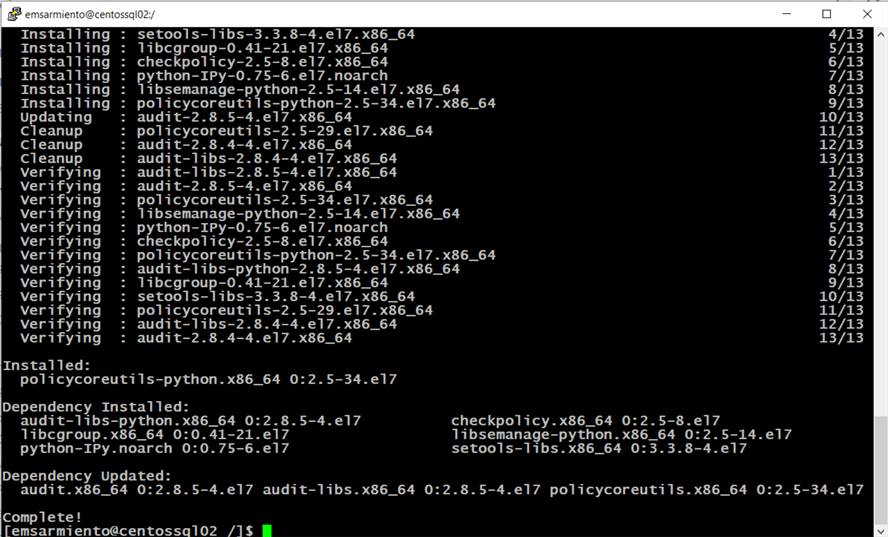 Because the shared directory will only be accessed through Samba, it should be labeled samba_share_t, which gives Samba read and write access. Run the command below to change all the files in the /var/opt/mssql/TLogsLS directory to type samba_share_t. The -a parameter adds a new record while the -t parameter defines a type (samba_share_t).

This change will be made persistent and will survive the execution of the restorecon command below. Run the command below to restore the default SELinux contexts to the directory and the files inside the /var/opt/mssql/TLogsLS. You want the mssql user to perform the tasks on behalf of the SQL Server database engine with the original security context. In this case, read and write transaction log backups.

After configuring SELinux, you can proceed to work on the secondary server. 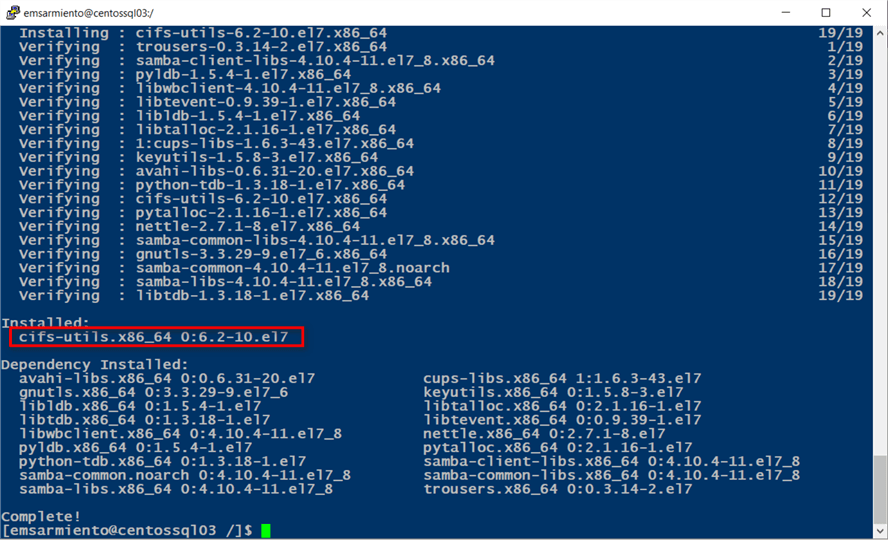 And because the directory is created with root privileges, the root user (and group) owns it.

Run the command below to grant the mssql user the read/execute permissions to the directory. The Octal (or numeric) value of the permissions is 0550.

The dr-x means that this is a directory and that the mssql user has read/execute permissions.

Next, run the command below to create a hidden file that will contain the credentials you provided for the Samba user on the primary server. The dot (.) in the beginning of the filename specifies that this is a hidden file.

Edit the file to contain the following:

To protect the file from unauthorized access, run the command below to restrict access to the file by only allowing the file owner (mssql) read-only permissions. The Octal (or numeric) value of the permissions is 0400.

Setting up Log Shipping on the primary server is the same as how it is done with SQL Server on Windows, using the sp_add_log_shipping_primary_database stored procedure. In the sample code below, note that the @backup_share parameter value is the same as the @backup_directory parameter value. The transaction log backups will be stored on the primary server’s local directory /var/opt/mssql/TLogsLS. Also, be sure that the @secondary_server of the sp_add_log_shipping_primary_secondary stored procedure can be resolved via its hostname.

Be sure to initialize the database prior to running the SQL Server Agent jobs. Backup the database on the primary server and restore it on the secondary server using the WITH NORECOVERY option.

You can view the status of the Log Shipping using the Transaction Log Shipping Status report in SQL Server Management Studio. Keep in mind that since there is no copying of transaction log backup files being done between the primary and the secondary servers, the Last Copied File field will be empty. 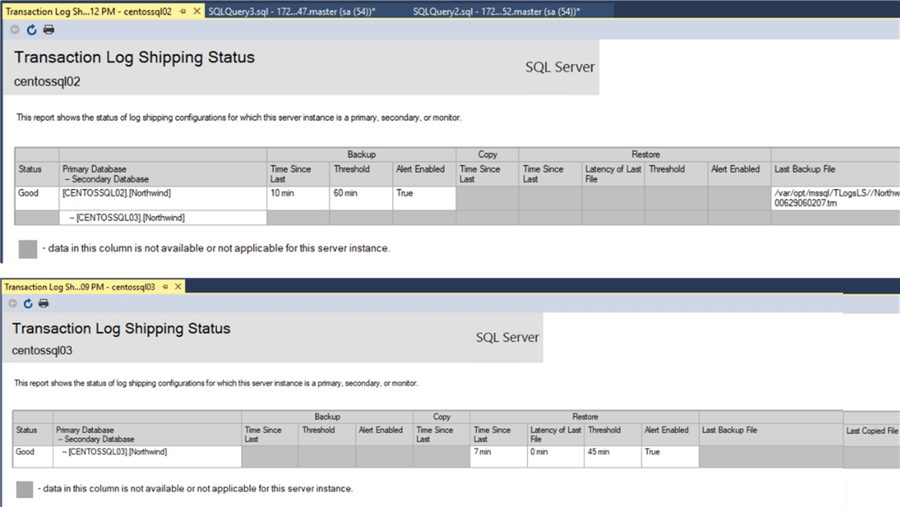 You will also see this in the Log Shipping Copy job history.

SQL Server Log Shipping to a Different Domain or Workgroup