A process which runs under an account granted LPIM privilege allows it to lock physical memory and prevents the Operating System (OS) from paging the locked memory to virtual memory on disk.

Hence, the locked memory here is the memory that the SQL Server Buffer Pool Manager has acquired and allocated to its buffer pool. Note that non-buffer pool portion of SQL Server such as thread stacks, linked servers, extended procedures, and any multi-page allocations by SQL Server that occur outside of the buffer pool can still get paged out.

To demonstrate and prove this behavior, this tip will present results collected on five actions performed in a test environment.

Our test environment is a virtual machine with 4 GB of physical memory hosting SQL Server 2016 Developer Edition (SP2) on Microsoft Windows Server 2012 R2 Data Center Edition. Performance monitor is started and running in the background every second to capture the four performance counters below.

LPIM privilege is granted to the SQL Server service account. We are not capturing performance counter Process: Private Bytes and Process: Working Set here as SQL Server will use the AWE API to allocate memory instead of the OS Virtual Memory Manager when LPIM is granted. So, we will be relying on performance counter Total Server Memory (KB) which behavior is unchanged regardless of LPIM to reflect amount of memory the SQL Server has committed.

There are five actions undertaken representing five scenarios outlined in this tip. We will go through each scenario as marked by the numbered red circle as per the screenshot below. 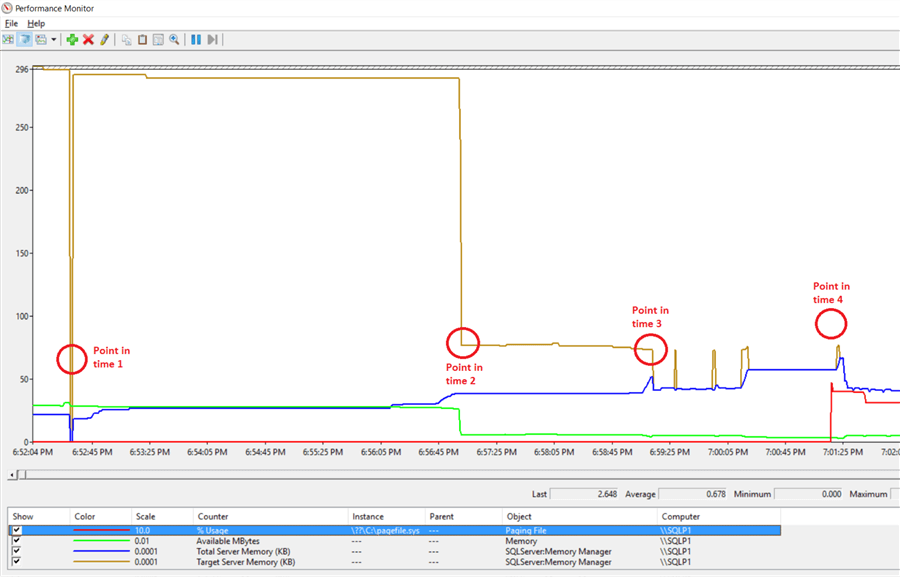 SQL Server maximum memory is set to 3 GB and SQL Server service is restarted prior to our test. This is the sudden dip observed in point-in-time 1.

When SQL Server starts-up, it writes a lot of useful messages to the SQL Server Log. One way to confirm LPIM is enable on your SQL Server instance is to look for the message highlighted in the red box as below.

We will be using a tool called TestLimit from Sysinternals to simulate a memory leak on the Windows OS. We begin the test by having this tool consume 2 GB of memory from the virtual machine with the command below. 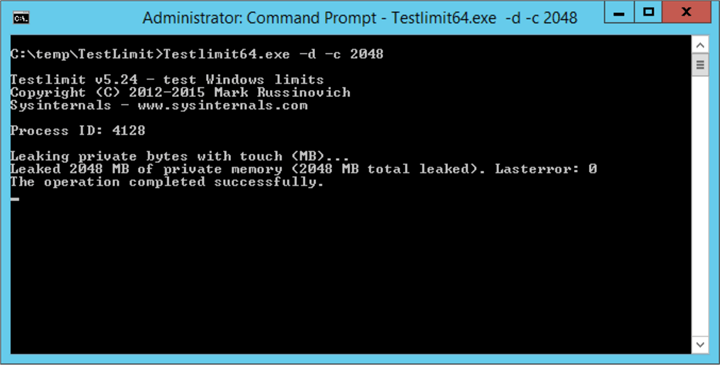 We can immediately see that the Windows OS available memory dropped by 2 GB in the perfmon line graph as indicated by the red circle point-in-time 2. SQL Server Target Server Memory (KB) counter also reflects the "missing" 2 GB memory by dropping its value from 2.8 GB to 788 MB, but the Total Server Memory (KB) counter which shows memory that SQL Server has already acquired did not change much.

The first test here confirms to us that an application or process in Windows OS can easily acquire physical memory that SQL Server has yet to allocate to its buffer pool.

The perfmon line graph indicate that SQL Server will still responds to external memory pressure, but it does try to prevent its physical memory from being paged out into virtual memory on disk.

So far, the virtual machine has enough physical memory to cater for our test scenarios and the Paging File: % Usage:C:\pagefile.sys counter is at zero.

We will launch a new command prompt and use Testlimit to consume another 1 GB memory in the virtual machine. 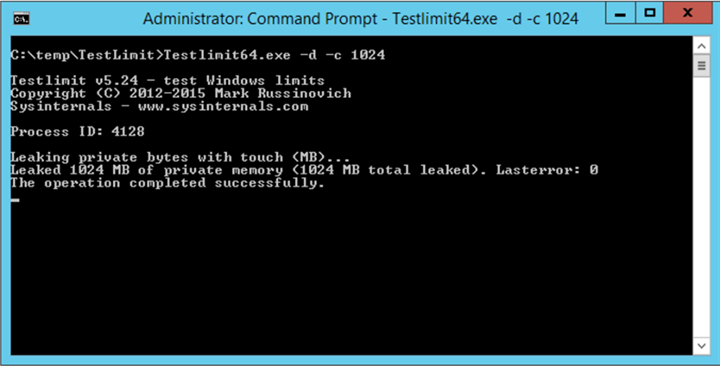 A continued test using Testlimit to keep consuming memory on the virtual machine ended up crashing the virtual server with an unexpected shutdown.

This tip provides an unusual, but possible scenario where an application memory leak on the OS could happen way before SQL Server reaches its configured maximum memory allocation target. It shows that LPIM does not lock memory that SQL Server has not committed to its buffer pool and hence causes severe memory pressure when an intensive workload is started.

The demonstration shows a race condition on acquiring physical memory in the virtual server, and LPIM might not be effective if a memory leak on Windows OS or an application consumes the server physical memory way before SQL Server does. An intensive memory pressure on the OS can crash the server hosting SQL Server regardless of the LPIM setting.