T-SQL is a formidable procedural language for Microsoft SQL Server derived from ANSI SQL (structured query language). With just basic DML (Data Manipulation Language) syntax – UPDATE, DELETE, INSERT, SELECT – you can already do a great deal of database programming with scripts or stored procedures. In this tip we'll go a little bit farther than the basics and show you some valuable SQL statements used in Microsoft's relational database management systems. Little pieces of T-SQL syntax that might take you to the next level.

Sometimes you have to reuse a result set in T-SQL, for example because expressions are becoming complex or you want to reference the result of an expression in multiple columns. The easiest option is to write a subquery:

A solution is to use common table expressions, commonly abbreviated as CTEs. A CTE is another way of writing a subquery. The previous query rewritten to use a CTE looks like this:

With a CTE, the subquery comes first, then the outer query. This makes the query more readable, especially if you have many subqueries. Take for example the query featured in the tip Adding Custom Reports to SQL Server Management Studio (which is about 1.5 pages long). With ordinary subqueries, it would be much harder to read and understand the query.

Some interesting facts about CTEs:

UPDATE with FROM clause Transact-SQL Tricks

It's possible to update a MS SQL Server table using the result set of a query involving other tables. Let's say for example we want to update the customer table with a column indicating the customer has made a sale in the past 3 months. Here is the SQL code with an UPDATE statement:

An advantage of this update pattern is that you can easily test what you're going to update. Simply put a SELECT * before the FROM clause and execute the query to see the result set:

If the query becomes more complex, you might want to use a CTE for clarity. This is the same query rewritten to use a CTE:

Take a look at how we can calculate the median with this SELECT statement:

A common use case is removing duplicates from a table. You can have "true" duplicates, where two or more rows are exactly the same, or "logical duplicates" where two rows have the same business key but some columns might differ. The latter can for example be the consequence of a join returning more rows than expected.

Removing true duplicates on a table can be tricky, if the table doesn't have a primary key defined. Suppose for example we have the following heap table defined with two columns of the varchar data type:

The following data is entered into the table:

We can delete the row by using the ROW_NUMBER() window function and a common table expression:

The trick here is that in the DELETE clause, you can also specify a CTE instead of a table name. In some cases, you can also use a view. Anyway, because the ROW_NUMBER function creates a unique number for each row (per code), SQL Server is able to delete one of the rows.

The tip Delete duplicate rows with no primary key on a SQL Server table goes deeper into this problem and proposes several alternative solutions to this problem.

The ROW_NUMBER function is useful when it comes to removing duplicate rows. You can also use it in SELECT or UPDATE statements to differentiate between rows which are unique or almost unique. Let's say for example an INNER JOIN is returning multiple rows, but we only want one specific row returned instead. In the AdventureWorks sample database, we can join the SalesOrderHeader table with the SalesOrderDetail table.

This will return multiple records for each sales order: 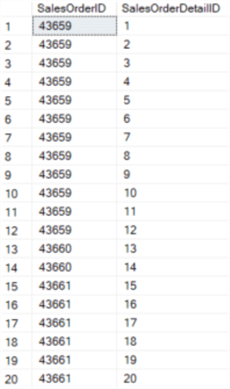 Another great example of the application of window functions is the tally table, or the "numbers" table. It's a table with one column containing only sequential numbers, usually starting at one. Using the ROW_NUMBER function and common table expressions, we can quickly generate database objects such a table in the SQL language:

The tally table is useful for mimicking iterations. Or in other words: looping over data without actually looping. By using a tally table, the solution remains set-based functionality. Solutions using row-based patterns (such as loops or cursors) don't tend to scale well in SQL Server.

We can use a tally table for example to return all dates between a given start and end date (which in traditional programming languages would be written with a FOR or WHILE loop):

This gives the following result set:

Stringing different values of a column together – the opposite of splitting a comma separated list – is a common requirement. For example, if we have the following column: 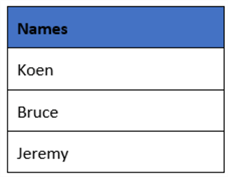 Since SQL Server 2017, we have the STRING_AGG function which can solve our request with a single statement.

Before SQL Server 2017, this was a tad harder to solve. My personal favorite was the "blackbox XML method", which uses the FOR XML clause with the PATH mode. Let's illustrate with an example. In the AdventureWorks data warehouse, we're going to concatenate all the employee names for each department. The query becomes:

This gives the following result:

The query uses a correlated subquery to filter the employees on the "current" department. Using XML PATH, the employee names are concatenated together. The GROUP BY clause is there to eliminate duplicates. If you would remove the GROUP BY, a row would be returned for each employee. Employees in the same department have the same result row. The STUFF function is used to remove the leading comma.

Although it looks quite weird, the XML method tends to perform quite well. In this article other alternatives to the solution are discussed.