SQL Server is usually a high I/O activity process and in most cases the database is larger than the amount of memory installed on a computer and therefore SQL Server has to pull data from disk to satisfy queries.  In addition, since the data in databases is constantly changing these changes need to be written to disk.  Another process that can consume a lot of I/O is the TempDB database.  The TempDB database is a temporary working area for SQL Server to do such things as sorting and grouping.  The TempDB database also resides on disk and therefore depending on how many temporary objects are created this database could be busier than your user databases.

Since I/O is such an important part of SQL Server performance you need to make sure your disk subsystem is not the bottleneck.  In the old days this was much easier to do, since most servers had local attached storage.  These days most SQL Servers use SAN or NAS storage or to further complicate things more and more SQL Servers are running in a virtualized environment.

There are several different methods that can be used to track I/O performance, but as mentioned above with SAN / NAS storage and virtualized SQL Server environments, this is getting harder and harder to track as well as the rules have changed as far as what should be tracked to determine if there is an I/O bottleneck.  The advantage is that there are several tools available at both the storage level and the virtual level to aid in performance, but we will not cover these here.

This DMV will give you cumulative file stats for each database and each database file including both the data and log files.  Based on this data you can determine which file is the busiest from a read and/or write perspective.

The data that is returned from this DMV is cumulative data, which means that each time you restart SQL Server the counters are reset.  Since the data is cumulative you can run this once and then run the query again in the future and compare the deltas for the two time periods. If the I/O stalls are high compared to the length of the that time period then you may have an I/O bottleneck.

Here is partial output from the above command.

Performance Monitor is a Windows tool that let's you capture statistics about SQL Server, memory usage, I/O usage, etc...  This tool can be run interactively using the GUI or you can set it up to collected information behind the scenes which can be reviewed at a later time.  This tool is found in the Control Panel under Administrative tools.

There are several counters related to I/O and they are located under Physical Disk and Logical Disk.  The Physical Disk performance object consists of counters that monitor hard or fixed disk drive on a computer.  The Logical Disk performance object consists of counters that monitor logical partitions of a hard or fixed disk drives. For the most part, they both contain the same counters.  In most cases you will probably use the Physical Disk counters.  Here is a partial list of the available counters.

Now that storage could be either local, SAN, NAS, etc... these two counters are helpful to see if there is a bottleneck:

The recommendation is that the values for both of these counters be less than 20ms.  When you capture this data the values will be displayed as 0.000, so a value of 0.050 equals 50ms.

Another tool that you can use is the Resource Monitor.  This can be launched from Task Manager or from the Control Panel.

Below you can see the Disk tab that shows current processes using disk, the active disk files and storage at the logical and physical level.  The Response Time (ms) is helpful to see how long it is taking to service the I/O request. 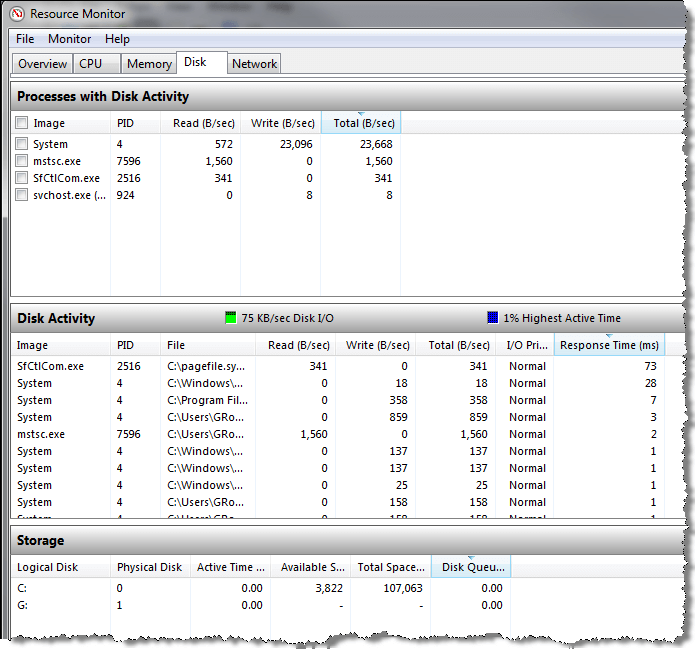 I/O issues may not always be a problem with your disk subsystem.  Just because you see a slow down or I/O waits occurring there may be other issues that you need to consider such as missing indexes, poorly written queries, fragmentation or out of date statistics.  We will cover these topics as well in this tutorial.

Here are some additional articles about I/O performance.