Problem
With SQL Server Management Studio you have the ability to do just about everything you can do using T-SQL commands.  One problem with using the GUI is that it is difficult to remember everything you clicked on to reproduce the behavior a second time.  Another issue is that most of what you do through the GUI is done immediately which may not always be the best scenario.  How can I capture what SQL Server is doing so I can reproduce the behavior or run the commands at a later time.

Solution
Another nice new addition to SQL Server Management Studio is the ability to script out most of the commands and operations that you can do through the GUI.  Let's take a look at doing a database backup as an example.

Let's say we want to backup the AdventureWorks database, but we don't want to run the backup immediately we just want to generate the code.  One option would be to use Books Online and look at the syntax and another is to let the GUI generate the code.

Letting the GUI produce the script

The first thing we need to do is go through the steps of creating a backup via the GUI.  To do this we just right click on the database name and select Tasks -> Back Up.  After this we get a screen that looks like the following. 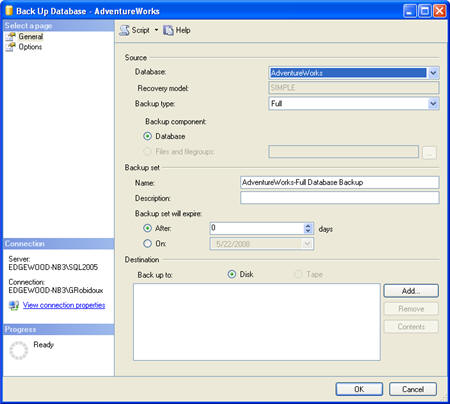 These are the parameters we have set on the General tab. 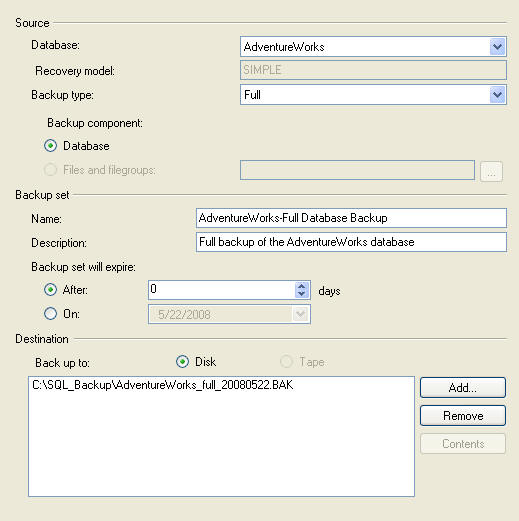 These are the parameters we have set on the Options tab.

Once we have selected all of the parameters that we want for our backup, click on the "Script" option in the top middle of the window.  If you click on the down arrow next "Script" you will see four options.

Here is the output we get when we select any of these options, but I used the "Script Action to New Query Window".  I also reformatted the output a little to make it a little easier to read.  As you can see this is a pretty easy way to generate a lot of code quickly that you can then customize to meet your needs.