To continue the series on disaster recovery scenarios in SQL Server 2005, let us look at another means to increase the availability of your highly critical databases. Isolating critical objects gives you the advantage of increasing your database availability. You should create a separate filegroup for your critical database objects. In fact, you should be creating your database objects in a different filegroup other than the default primary filegroup. Most of the time, we think of filegroups as a means to improve performance or manage database files. However, we tend to forget the fact that filegroups can be used as a means to improve database availability and should be considered as part of our disaster recovery plan.

1) Keep user-defined objects away from the PRIMARY filegroup

Now, if you already have an existing database, plan well on how you would move your user-defined objects out of the primary filegroup as you need to deal with moving the data and the indexes along with the tables as well. An example on how to do that is provided on a table level on the next item.

Let's say the Order Details table of the Northwind database is a highly critical object. We can create a separate filegroup just for this object and store it on a data file that we can define on another disk subsystem - a RAID 5 disk subsystem would be recommended for both I/O performance and redundancy but if you do have enough budget for your disks, a RAID 10 subsystem would be ideal. I'll first create a new filegroup named OrderDetailsFG on my Northwind database

Next, I'll add a database file in my Northwind database and add that file to the filegroup I have just created. My operating system partition sits on my D:\ drive as well as my database files so I'll store this new database file on my F:\ drive. Do take note that you should place this data file on a fault tolerant disk subsystem

You have the option to do this as an online index operation by specifying the ONLINE parameter to ON instead of OFF, giving you the benefit of doing this operation without bringing the database offline. In the example above, I used the offline option because removing an existing primary key might affect transactions running against this table. 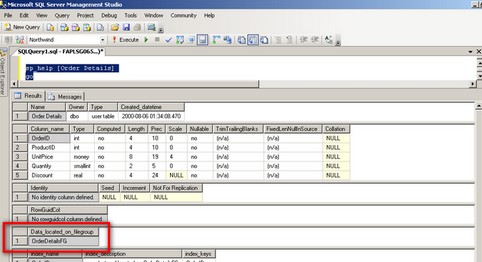 It is up to you to move all the other indexes in a separate filegroup for performance and maintainability but that of course will depend on your requirements and your budget.

3) Update your disaster recovery plan to include this change

Now that you've managed to move your highly critical table to a separate filegroup, you need to update your disaster recovery plan to include this change. You must perform a FULL database backup after performing the steps above to make sure that you have a consistent state anytime a disaster occurs.

If you currently have FULL database backups, you need to include the process to recover using filegroups. This gives you an opportunity to do piecemeal restores in case your critical object encounters a disaster.

To simulate a disaster, let's say the disk subsystem containing the OrderDetailsFG filegroup is damaged. What I did was to manually run the CHECKPOINT command so that SQL Server will write all the dirty pages in the buffer cache to disk, including the damaged one. This is just to demonstrate that the disk subsystem containing the Order Details table is unavailable. Note the path of the NorthwindSalesData.ndf file in the error message 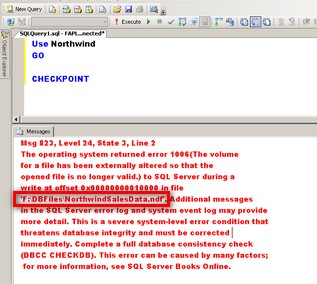 What we will do is to bring the file containing the Order Details table offline. This partial availability feature in SQL Server 2005 gives us the advantage of performing file or filegroup restores without taking the entire database offline.

Running the script below will show us the status of the NorthwindSalesData file. 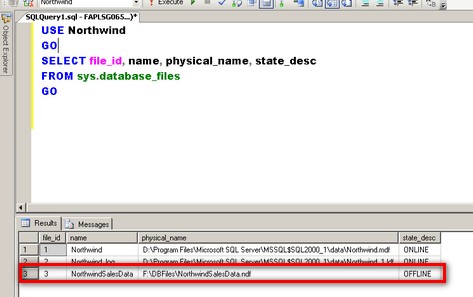 Next, we will restore the damaged filegroup from our backup by moving it to a different disk subsystem. Note that in the real world, it might take some time for the disk to be replaced, hence, restoring it temporarily to an existing disk subsystem. You should document this procedure as you need to move it back to the original drive when the disks get replaced. To restore the damaged filegroup,

As in Part 1 of this series, we need to backup the tail of the log so we can recover the transactions until the time the database filegroup (in this case, the disk subsystem containing the filegroup) was damaged.

Finally, we restore the tail of the log which we backed up as part of the recovery process to get the database filegroup back online and in a consistent state as before the disaster,