I have an application that has a specified database connection that I either can't or don't want to change. However, I need to move the database to a new server. How can I do this easily without breaking other things that maybe using this connection and/or database?

By using an alias, we can keep the application configuration the same, but tell the operating system to look somewhere else for the database. One proviso is that once an alias is created, it is set at the operating system level. That means if we have two applications which connect to MySQLServer on that computer, once the alias is created, both will be re-pointed based on the alias. You can create an alias using one of two utilities:

Let's start by looking at how to do it using SQL Server Configuration Manager. In the left pane of SQL Server Configuration Manager, if you expand the SQL Native Client Configuration folder, there is a subfolder called Aliases (see Figure 1). If we click on this subfolder, we'll see any aliases that have been defined for the system shown in the right pane. In most cases, there won't be any defined. To create a new alias, right-click on Aliases and choose New Alias... from the pop-up menu. 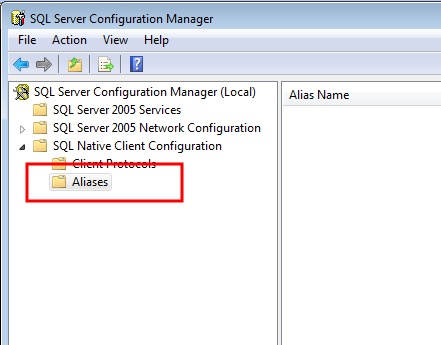 A dialog window comes up (Figure 2) which allows us to specify our new alias. In the Alias Name property, you specify the name the application uses. For instance, if it connects to a SQL Server called MyOldServer, that's what you enter in here. You can also enter an alias that appears to point to a named instance, such as MyOldServer\MyInstance. You can then specify the server where the database really is, to include configuring the protocol, the server name, and the port. Clicking the OK button will create the alias. In the case of Figure 2, I'm creating an alias called MyOldServer which points to my local server's default instance. 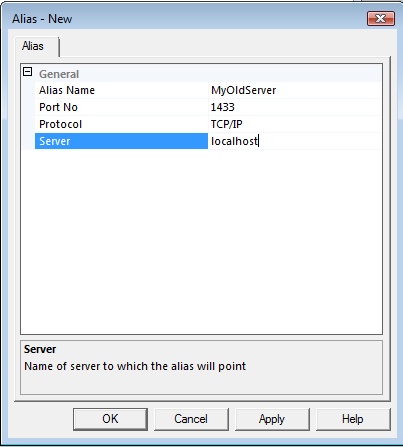 You should now see the new alias listed in the right pane (Figure 3).

The next step is to test the connection. You can do so quickly by either creating and testing a Data Source Name (DSN), or if you have the SQL Server client tools installed, by using SQL Server Management Studio (SSMS). I'll do so using SSMS. Figure 4 shows the dialog window to open a new connection to a database engine. For Server name:, enter in the alias you specified. In the example we called the alias OldServerName, so that's what we'll use here. 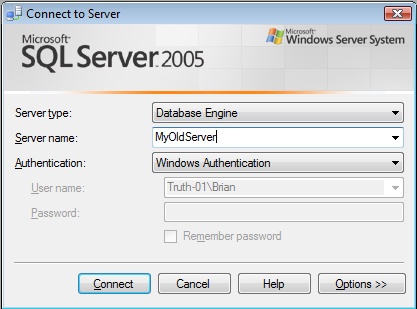 If the alias is pointed correctly to the new location, a successful connection should be established. In SSMS, I was opening a new connection for Object Explorer. Figure 5 shows that the connection was successfully made using the alias. Note that as far as SSMS is concerned, the server name is the alias. 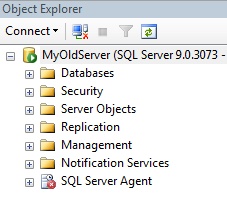 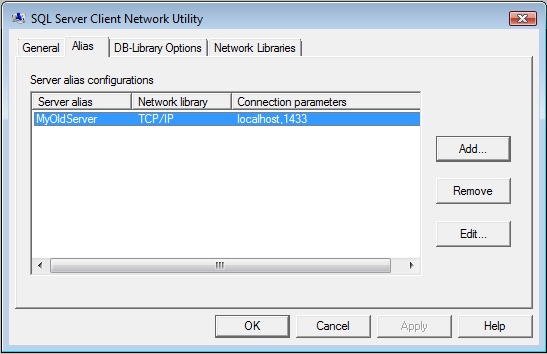 To create a new alias, click on the Add... button. This will bring up a new dialog window where you can specify your alias (Figure 7). Just as with SQL Server Configuration Manager, the Server alias is what the application will attempt to connect to. You can specify where that alias points to by specifying the network library, the real server name, and any additional configuration parameters. In Figure 7 I'm creating a new alias called MyOldServer2 that also points to the default instance of my local server. 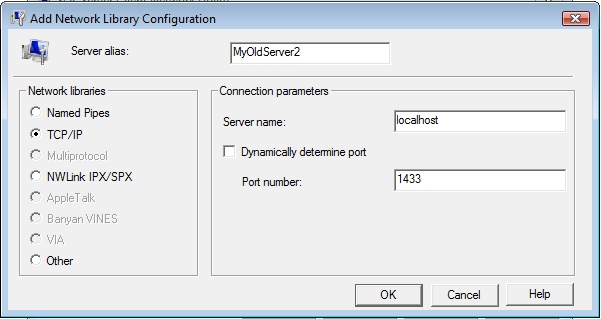