First of all, it is important to know what SQL Server Native Client (SNAC) is. Microsoft states that a SNAC "contains the SQL Server ODBC driver and the SQL Server OLE DB provider in one native dynamic link library (DLL) supporting applications using native-code APIs (ODBC, OLE DB and ADO) to Microsoft SQL Server." You can read more here: http://msdn.microsoft.com/en-us/data/ff658532.

SNAC 9 was introduced with SQL Server 2005 and SNAC 10 came with SQL Server 2008. It's important to be able to verify which version of SNAC is used by SQL connections, because there are additional features in SNAC 10 that are not supported in SNAC 9. Refer to the link in the next steps section about the differences.

You can run the following query to get a list of connections and their protocol version.

As we can see below the converted protocol is pretty cryptic. 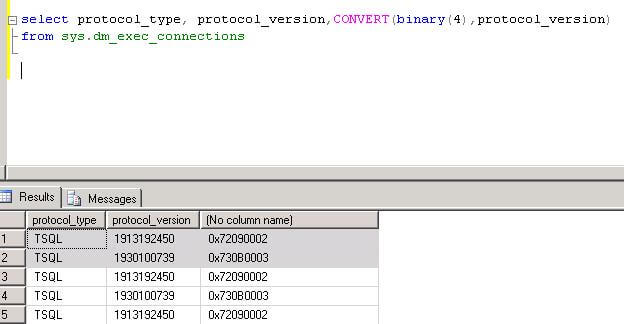 According to the table below (source: http://msdn.microsoft.com/en-us/library/dd339982(PROT.13).aspx), we are able to interpret the hexadecimal value of the protocol version. For example, values 0x730B003 indicate that this connection comes from a client using a SQL Server 2008 driver.

To make these eaiser to read, we can rewrite our query as follows to show the driver version.

The output below shows us that our client applications are using a SNAC 9 or SNAC 10 protocol as shown in line 1 and line 2.