Depending on what Net-Libraries you have enabled on the SQL Server, it starts listeners for these Net-Libraries. You can configure SQL Server to listen simultaneously on any combination of Net-Libraries. In other words, when the net-library listener on the server receives the TDS (Tabular Data Stream which is the format in which client requests are broken/formatted before sending it to the server as well as server responses broken/formatted before sending it back to clients) packets from the network, it reassembles them into original client requests and passes it up for processing. Please note each specific type of SQL Server Net Library listener will listen for the client requests if they are coming from the same type of Net Library (a matching pair of Net-Libraries must be enabled on both SQL Server and clients) and a connection from the client can be done using a single protocol only. For example, if the client sends the request to SQL Server using TCP/IP then on the server only the TCP/IP Net Library listener will pick up this request. Also, SQL Server will use the same network stack, over which the request was received, to send the response back to the client.

These are the different Net-Library options that are available:

Shared Memory
When you have a client which is on the same physical machine as your SQL Server, you can use this simplest net library which provides faster communication than other Net-Libraries as it bypasses the physical network stack. The reason is, it uses the Windows Shared Memory feature to communicate between SQL Server and the client. You might use this Net-Library while troubleshooting if other Net-Libraries are not working properly. This Net-Library is by default enabled and used when you specify either a period or (local) as your machine name or localhost or machine name or by prefixing machine\instance name with lpc: when connecting to a SQL Server instance, you can find more details here.

TCP/IP
TCP/IP (Transmission Control Protocol/Internet Protocol) is the default protocol on the clients running on the Windows platform. It allows communication across interconnected networks of computers with diverse hardware and operating systems. TCP/IP is considered as the first choice after Shared Memory, because of its inherent network traffic routing standards and advanced security features.

VIA
VIA stands for Virtual Interface Adaptor. This protocol works with VIA hardware. Please refrain from using this protocol in your newer development as it has been deprecated and will be removed in future releases of SQL Server.

Normally TCP/IP is the preferred protocol in a slow LAN, WAN or dial up network whereas Named Pipes is more considerable in fast local area networks, to learn more about these differences click here.

The script provided in script #1 below gives the details about existing connections like when the connection was established and what protocol is being used by that particular connection. 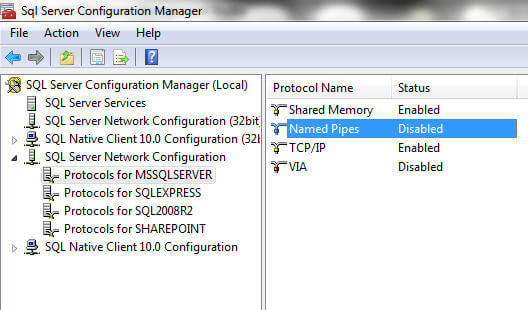