To continue this series on Installing SQL Server 2008 on a Windows Server 2008 Cluster, we will look at building our Windows Server 2008 cluster in preparation for SQL Server 2008. In Part 1, we have completed the installation of the Application Server role in both of the servers that we will be using as part of our cluster. This tip will walk you through the installation of the Failover Cluster Feature, validating the servers that will be a part of the cluster, and creating the cluster.

Windows Server 2008 calls them features which are simply software programs that can support or augment the functionality of server roles. Since we've already installed the Application Server role in our server, let's define a feature from this perspective: failover clustering simply augments the role as an application server by making it highly available. It is disabled by default, unlike in Windows Server 2003 so we need to add it on both of the servers that will form a part of our cluster.

To add the Failover Clustering feature:

Unlike in previous versions of Windows where Microsoft had some sort of a hardware compatibility list (HCL) from which we had to find and select components tested to be clustering-supported, this wizard is like the "seal" that tells you whether or not the hardware you are using is supported. In fact, Microsoft has partnered with hardware vendors to create the Failover Cluster Configuration Program to make the acquisition of hardware for Windows Server 2008 Failover Clustering very easy and simple. Basically, your hardware will be supported for clustering if it meets these two requirements: the server has a "Certified for Windows Server 2008" logo and it passes this wizard.

One word of caution: do not skip any error message that this wizard generates in the final report. Doing so would simply mean that your configuration going forward will be unsupported. You only need to run this wizard on either of the nodes.

If you have reached this part of the process, the wizard will tell you whether or not you can proceed to the next step of creating your cluster. As I've mentioned earlier, do not attempt to go any further if this report returned any error messages. I have seen some installations where the shared disk is displaying an error in the validation report prompting me to reconfigure the shared disk. This could mean removing the disk subsystem from both nodes, creating new disks and presenting them on the nodes as mentioned in Part 1 of this series. It would be best to work with your storage engineers or your system administrators when in doubt as different vendors may have different implementations of their disk subsystems.

I've also seen issues pertaining to IPv6. This is a fairly common issue which can easily be resolved. The error message in the cluster validation report looks something similar to the one displayed below

This blog post outlines the step in resolving this issue. In a few cases, however, I needed to disable the Teredo Tunneling Pseudo-Interface adapter from Device Manager before I got a successful summary report generated by the Validate Cluster Configuration wizard. The bottom line is simply to make sure that the report returns a successful validation before creating the cluster.

You've finally reached this step in the entire process. This means you are now ready to create your Windows Server 2008 cluster. It's as easy as running the Create Cluster Wizard on either of the nodes. Make sure that you have your virtual hostname and IP address ready before proceeding

To run the Create a Cluster Wizard:

Congratulations! You now have a working Windows Server 2008 cluster. Notice how easy it was to do all of these with fewer steps and less configuration compared to its predecessors. You can now validate whether your cluster is working or not. A simple test would be to do a continuous PING on the virtual hostname or IP address that you have assigned to your cluster. Reboot one of the nodes and see how your PING test responds. At this point, you are now ready to install SQL Server 2008.

This section is sometimes necessary especially when Windows Server 2008 decides to take a different disk subsystem as a quorum other than the one you've originally intended it to. Notice that in the Create a Cluster wizard, there was no option to select the disk subsystem that we can use as a quorum disk (now called the "witness" disk). By default, the Create a Cluster wizard will use the first available disk as the witness disk. I have seen cases where the originally planned witness disk is sized 1GB while the other shared disks are sized 200 GB. The wizard then selects one of the 200GB-sized disks as a witness disk, requiring you to move the witness disk to the original allocation. To validate, check the Storage node under the Failover Cluster Management console 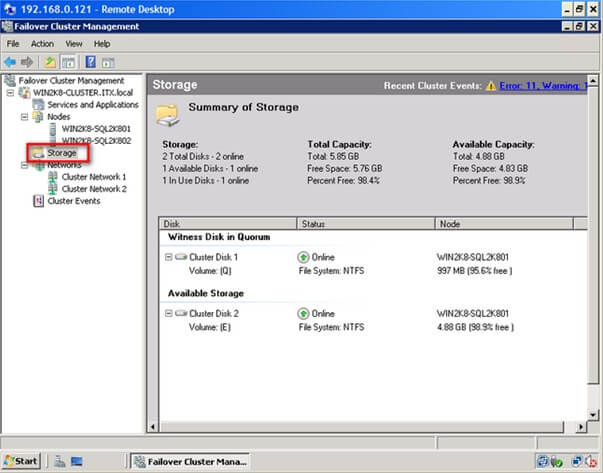 To configure the quorum in a failover cluster:

For more details on Configuring the Quorum in a Failover Cluster in Windows Server 2008, check out this Microsoft TechNet article.