Capture all statements for a SQL Server session

One thing that frustrates me is that sometimes I write these great queries, but often forget to save them or can't remember exactly what the query looked like that I ran five iterations ago. One smart thing to do would be to always save your scripts, but when your in the process of trying a bunch of different things there is always the chance you may loose something. In this tip we look at creating a server side trace for one session and capturing all completed batches that are run, so you can find that great query that you thought you may have lost.

The first stored procedure shown below starts the server side trace, but it also excepts the SPID for the particular session you want to capture. It will create a file name such as "TraceMySession_52_d20090317120912.trc" to keep the trace session unique. This is set to save to the file to the "C:" drive of the server, so you may want to change this to a different directory. The script is also setup to create a 5MB file and then roll over to additional files. Again you can check out the tip mentioned above for more about these settings.

The other thing that we are doing is only capturing the SQL:BatchCompleted events. This way the trace file doesn't get very large. The three data columns that will be captured are TextData, StartTime and SPID.

To create the procedure, copy the code below and execute it. Like I said I created this in the master database, but this could be created in a different database.

This stored procedure below will stop and close the trace once you are finished. If this is not run the server side trace will continue to run and collect data for any other session that happens to have the same SPID.

I also created this in my master database, but this can be created in a different database as well.

So let's say we have the following code that we want to run.

The first thing that we need to do is start the trace which is the first line of my script. I can see my SPID at the bottom of the screen which is 52, which has been highlighted below. 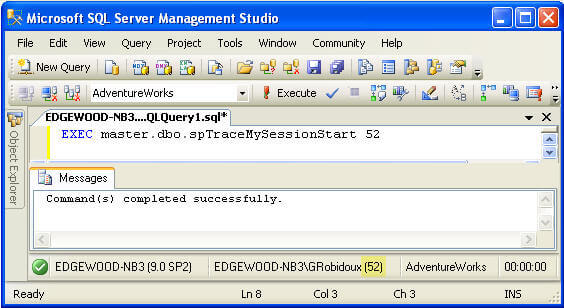 When I run the store procedure, the output shows me the TraceID which is "2". We need to keep this value for later. 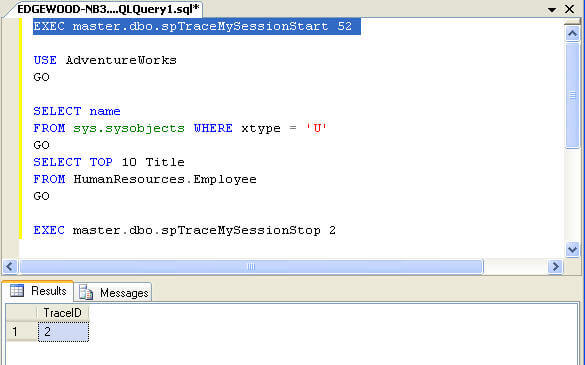 After I have run my other commands and I am done, I can run the last line to stop and close the trace and use the TraceID value of "2" which we got above. 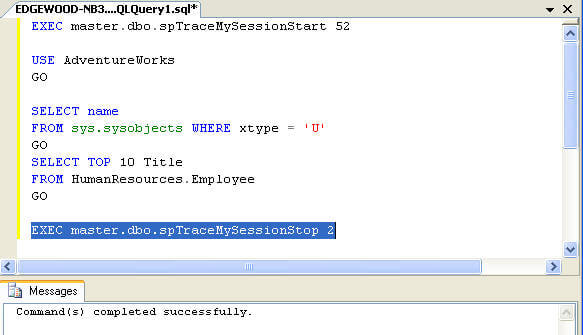 Reviewing What Was Captured

If I open the file that was created using Profiler I can see all of the commands that were run for my session. You could then copy these lines into a query window for reuse.

Another option is to load the file that was created to a SQL Server table or just query the data using SQL Server. The steps for doing this can be found in this tip. 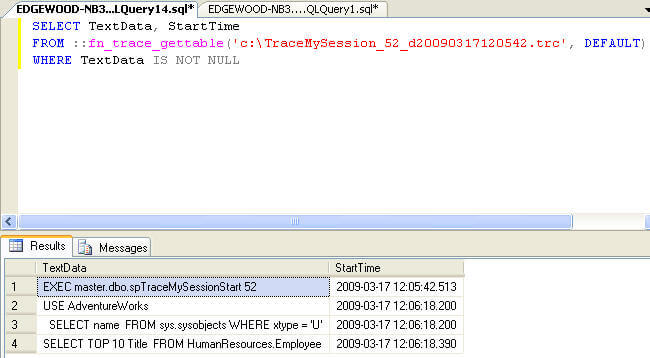