Performing DML operations through tested application are always safe and efficient. This process also prevents an accidental update or delete of all rows in a table. In my environment, I have a couple of tables that often require ad-hoc updates of certain values or delete of certain rows. On our development SQL Servers ad-hoc DML operations for various purposes are frequent. Unfortunately, there have been a couple of incidents in when someone accidentally issued a DML command without a WHERE clause, hence affecting the entire table. Is there an efficient way to prevent accidental DML operations without a WHERE clause?

It is a good idea to prevent accidental DML operations which may affect an entire table. For both accidental UPDATE or DELETE prevention, we make use of triggers in this tip. A new trigger may be created and if a trigger is already defined on the table then it may be altered to embed prevention logic. As an example, let's use the Purchasing.VendorContact table in the AdventureWorks database for this hands on example. Here are the basic steps we are going to follow:

One final note before we get started, it is assumed that a cluster index exists for the table on which these triggers would be implemented.

Currently no trigger is defined on the Purchasing.VendorContact table. First we will create an UPDATE trigger to prevent any accidental update of all rows in table.

We have used the sys.dm_db_partition_stats DMV to get find out the number of rows in the table. Since the DMVs where introduced with SQL Server 2005, the following script can be used:

If an update trigger is already defined on the table, then alter the code above can in inserted into the body of trigger as shown below: 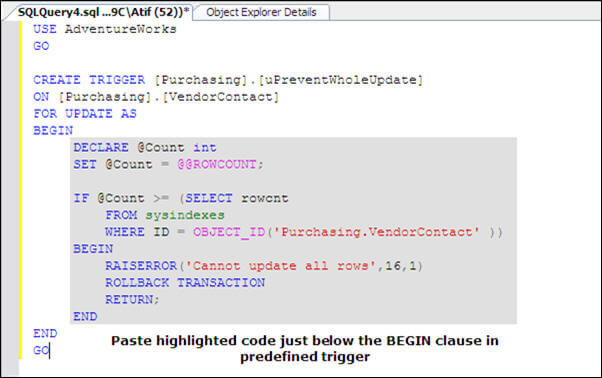 If you have a need to update all of the rows of table, then disable the trigger or ALTER the trigger to prevent the logic from executing.

Now that a DELETE trigger is defined on the Purchasing.VendorContact table, we can modify the delete trigger to prevent accidental delete of all rows in table. Just ALTER the trigger and paste code for the prevention logic at the beginning of the trigger. Also be sure to change the message generated in the RAISEERROR logic appropriately. Keep in mind that the previous functionality of the user defined trigger will remain intact. 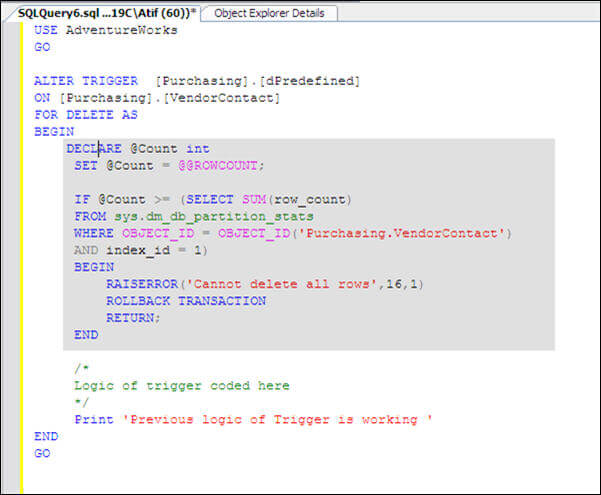 Now that the trigger Purchasing.dPredefined has been modified to prevent a delete operation without a WHERE clause, keep the remaining code intact and it should work without an issue. For SQL Server 2000 instances, make use of dbo.sysindexes table instead of the DMV as mentioned in the script above. If it is required to delete all rows from a table and no logged operations are permitted, then issuing a truncate table command should be more efficient and it should not invoke the trigger logic.

Verify the functionality of UPDATE trigger

Now we have two triggers defined on Purchasing.VendorContact to prevent the a mass update or deletion of all rows in the table, let's verify the desired functionality.

First we will issue an update statement with a WHERE clause.

The update was successful when performed by providing WHERE clause.

Now let us issue the update statement without WHERE clause.

This statement generates an error. You can also verify the data in the table by selecting the rows.

Verify the functionality of DELETE trigger

First we will execute a delete statement with a WHERE clause.

Once again the trigger logic is fired and the delete is prevented. You can also verify the presence of the data subject issuing SELECT statements.