Problem
I have created some views to provide limited data access for an application. Several of these views are composed of more than one table and there are problems while performing insert, delete, or update operations on multi-base table views. I am required to seamlessly manage such problems, so that developers do not get direct access to the base tables for DML operations. In SQL Server 2000 and onwards there are INSTEAD OF triggers that can be used to carry out such tasks. Although these types of triggers can be used in a number of scenarios their primary function is to perform DML operations through such views. It looks like a powerful capability and I am interested to know about the implementation of INSTEAD OF triggers for various DML operations.

Both of these work for insert, delete and update operations. Triggers created with FOR or AFTER keywords are both AFTER triggers. AFTER triggers do not work for views, so we will discuss the properties and functionality of INSTEAD OF triggers.

INSTEAD OF triggers cause their source DML operation to skip and they just execute the code provided inside them. Actual insert, delete or update operation do not occur at all. However they have their associated inserted and deleted tables simulating the DML operation. Inserted and deleted tables are widely used in operations inside triggers and I will show you some examples below . We will discuss further aspects of INSTEAD OF triggers by going through some examples for DML operations.

In the following script we will create and populate two base tables and a create a view over both tables.

Now we are ready to create the INSTEAD OF trigger for insert, delete and update operations on view vw_empQualification.

In the examples I have chosen simple and common scenarios, but there is much that can be done using INSTEAD OF triggers in SQL Server.

INSTEAD OF INSERT Trigger for Insert operation

Our view is comprised of two base tables. If someone tries to insert values using the view the following error will be generated and the insert will fail.

At this point, the INSTEAD OF INSERT trigger provides us several options to handle insert operations on this view. For our example we will allow the users to insert data through this view, by having the trigger handle some logic for data integrity.

Inserted data is handled in the trigger and our inserted row is shown in the selected data below.

INSTEAD OF UPDATE Trigger for update operation

The following script is for an INSTEAD OF UPDATE trigger is used to provided seemless update capability for multiple base tables.

Now we can verify the proper functioning of our trigger for an update statement.

The INSTEAD OF UPDATE trigger handled the update and the update is reflected in the selected data below.

INSTEAD OF trigger for delete operation

INSTEAD OF trigger may be attached for delete operations. In our case we are required that when rows are deleted through the view, a deleted flag in the table should be marked "1" for those rows, but rows should not actually be deleted. Such rows may be deleted in bulk later at specified time if needed. For this we may create the following INSTEAD OF DELETE trigger. 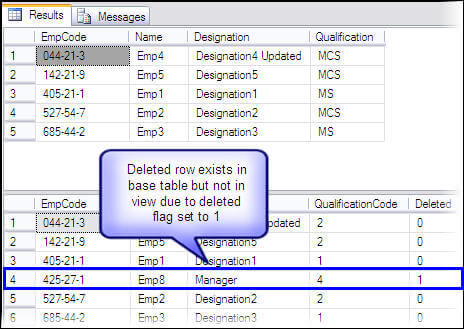