You are getting your first steps into the SQL Server development world. You know how to write basic queries and stored procedures. Now you want to take advantage of triggers. You understand the concept of what a trigger is and how it works. The problem is that you don’t know how to implement it syntactically. In other words, you don’t know how to create, alter or drop a trigger. In this tip I will help you with that.

If you never coded an application that uses triggers you may feel nervous the first time working with them. But in this tip, I will walk through the syntax needed to work with triggers.

There are three statements to use to create, modify or delete triggers.

Something I want to note is the fact that the [OR ALTER] portion of the CREATE TRIGGER statement was added in SQL Server 2016 so it won’t work in earlier versions. This enhancement allows a more efficient deployment of code because a script containing a CREATE OR ALTER TRIGGER statement won’t fail in case the trigger already exists in the target database.

In the next table, I describe each of the arguments of the CREATE TRIGGER syntax.

Now I will show you an example about how to create a trigger, but first we need to set up a test environment.

In this test scenario we have an Employees table with employee’s data and also a column named EmployeeManager which contains the EmployeeID of the Manager of the current employee.

Here is the T-SQL to create the table.

Next we will insert some test data as follows:

I am using the IDENTITY_INSERT so I can control the IDs for these first few records.

Finally, we can try our trigger by running the next code that tries to insert two employees into the Employees table. One of the records tries to insert a record for a manager (EmployeeManager value) that doesn’t exist.

As you can see on the next screen capture, the first insert worked, but the second did not becuase the trigger prevented us from inserting a row with the non-existing EmployeeID = 10 value for the EmployeeManager column. 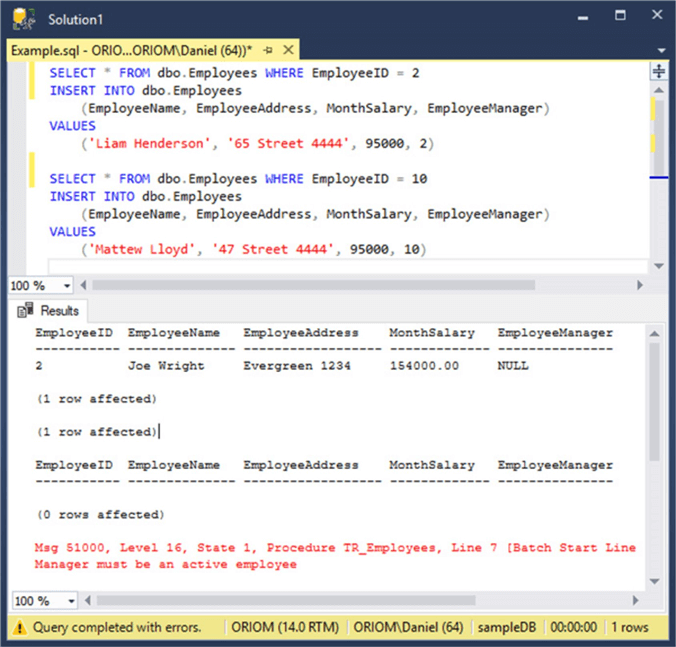 Modifying the Code of a SQL Server Trigger

When you need to change the code of a trigger you can use any of the next methods.

If you need to change the code of a single trigger maybe the easiest way to do so is by using the ALTER TRIGGER statement. This is because most of the time you can use sp_helptext stored procedure to retrieve the text of the trigger’s code, change the CREATE word to ALTER, write your code and finally hit F5 key in SQL Server Management Studio.

But in such case, if you need to change other aspects of the trigger regardless the trigger code you can use the full syntax of the ALTER TRIGGER statement as shown below.

Additionally, the next table describes each of the arguments of the ALTER TRIGGER syntax. As you may guess, the arguments are identical to those of the CREATE TRIGGER statement.

Going back to our previous example, now we are going to modify the trigger we created before. The trigger was only validating the data inserted into the table, but it misses data being changed or deleted. Take a look at the following code where we add a validation for those cases.

After modifying the trigger lets run the next set of code so you can see the trigger doing its job.

The next code attempts to update the employees table for EmployeeID = 2 to set the EmployeeManager to 100, but there is no EmployeeID = 100 in the table.

Additionally, the second query tries to delete from the employees table the row with EmployeeID = 2, but that EmployeeID is the manager of EmployeeID = 5.

On the next screen capture you can see the output of that query. 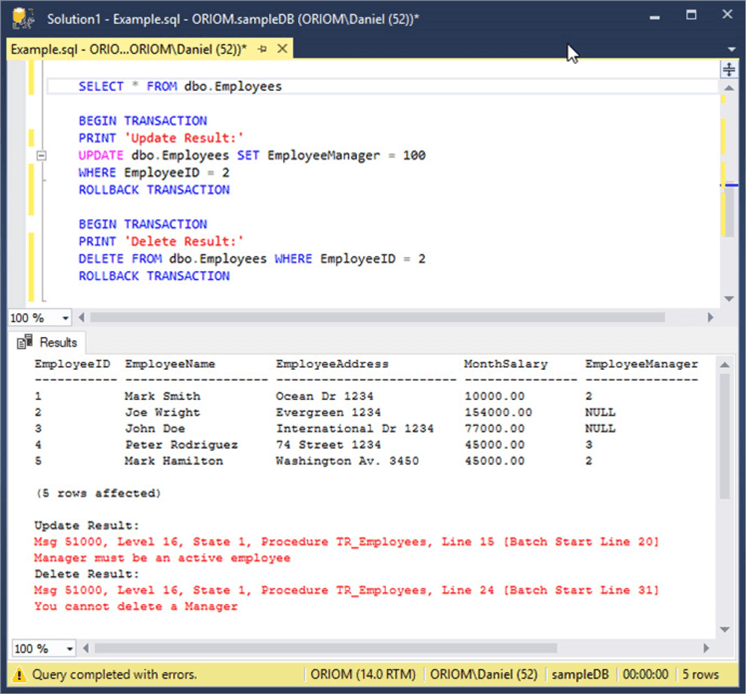 This is the easiest trigger statement to remember.

For example, if we want to delete the trigger we created earlier we have to run the next statement.

Another interesting fact is that when you delete a table or view that contains triggers, those triggers are also deleted automatically as you can see on the next screen capture. 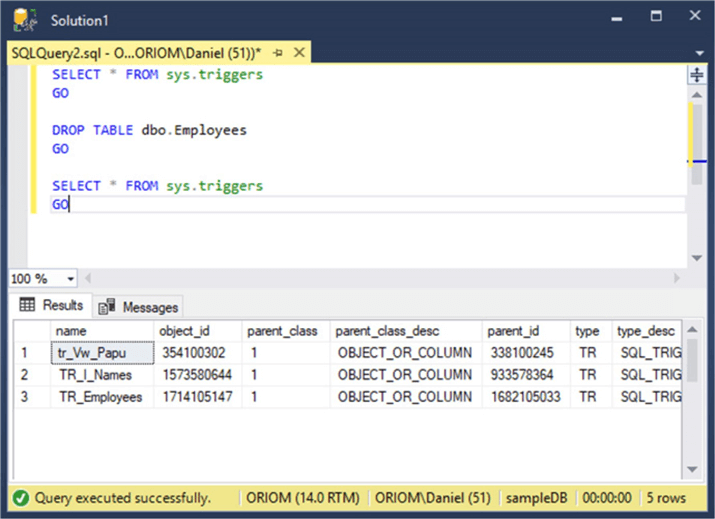