Triggers are one of the most misunderstood topics for people new to SQL Server. Maybe this is due to the fact that they allow almost all the same functionality as stored procedures, making the inexperienced developer confused about whether to create a stored procedure or trigger.

What is a SQL Server Trigger?

A SQL Server trigger is a piece of procedural code, like a stored procedure which is only executed when a given event happens. There are different types of events that can fire a trigger. Just to name you a few, the insertion of rows in a table, a change in a table structure and even a user logging into a SQL Server instance.

There are three main characteristics that make triggers different than stored procedures:

There are two classes of triggers in SQL Server:

What is The Importance of SQL Server Triggers?

One of the fundamental characteristics of relational databases is data consistency. This means that the information stored in the database must be consistent at all times for every session and every transaction. The way relational database engines like SQL Server implement this is by enforcing constraints like primary keys and foreign keys. But sometimes that is not enough.

In SQL Server there is no chance to enforce referential integrity between two tables using foreign keys if those tables are in different databases or different servers. In such case the only way you can implement it is by using triggers.

How Do I Know Which Rows Were Updated, Inserted or Deleted using a SQL Server DML Trigger?

In the case of DML triggers, there are two virtual tables during the execution of the trigger that holds the data being affected by the trigger execution. Those tables are named inserted and deleted and they have the same table structure as their base table.

In the next code section, you will see the basic CREATE TRIGGER syntax.

Additionally, the next table describes each of the arguments of the CREATE TRIGGER syntax.

There are two clear scenarios when triggers are the best choice: auditing and enforcing business rules. By using a trigger, you can keep track of the changes on a given table by writing a log record with information about who made the change and what was changed in the table.

The same happens when you want to enforce business rules with a stored procedure. If someone modifies the data on the base table from outside the application you can have a problem because the data consistency cannot be guaranteed. To avoid this issue, you would make sure the stored procedure was the only way to access the table.

Let's suppose that we have a database for the human resource department. This database contains a table Employees to keep personnel information and salaries. With the help of a trigger we can keep an audit record in a separate table that contains each record modification as well as the user who made the change and the time it happened.

First, we must create the Employees table.

In order to be able to test the sample trigger we need to add some data to the Employees table.

Now that we have the test environment set, it's time to create our trigger. Take a look at the code below.

In order to test the trigger, I created three queries. I put the code inside a transaction just to keep order in my test environment, you can omit this.

The first of those queries is an update.

The second query is an insert of two rows to the Employees table. 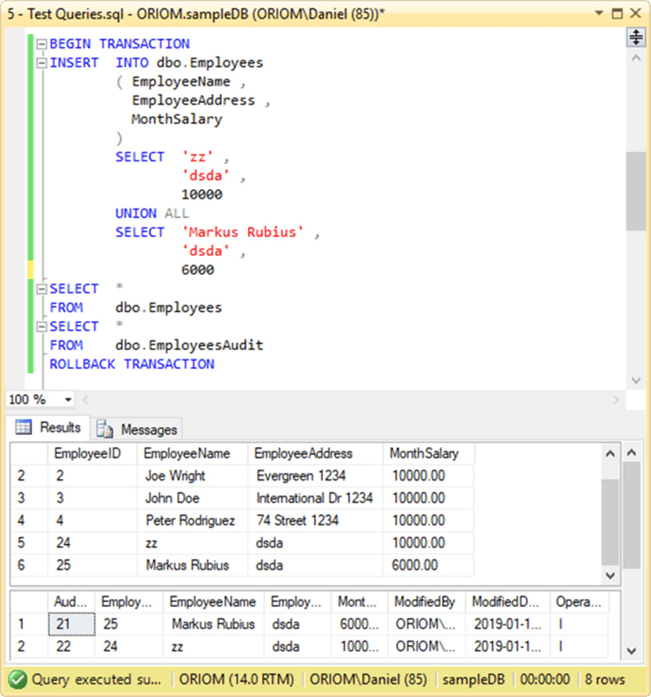 Finally, the third query is a delete statement on the Employees table.

On the next screen capture you will see the row deleted from the Employees table and its respective audit record in the EmployeesAudit table. 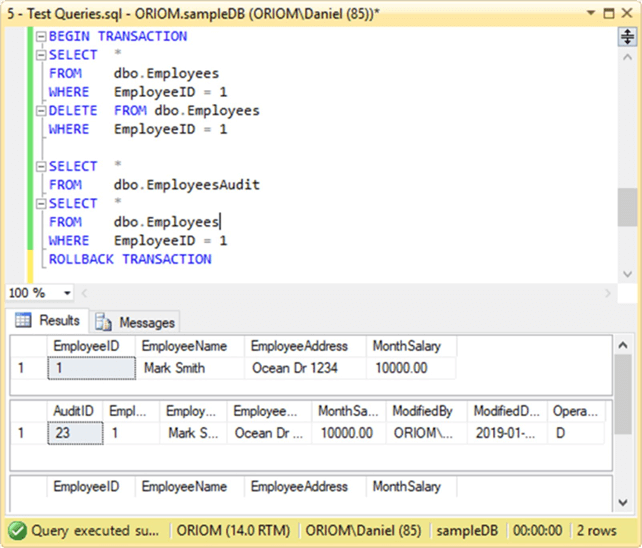