When writing Transact-SQL code, developers must follow internal coding rules that have been established by the company. Most of the time those rules are focused on how the code is written leaving aside what the code is doing (or trying to do). In other words, the internal coding guidelines of most enterprises covers aspects like naming conventions, capitalization of statements and variables, and tabulations just to mention a few.

But even the nicest and easiest to read piece of code can become a nightmare if you have to find a bug. This is specially the case when triggers are involved.  So, I decided to write this as a reference guide to cover what is usually not covered in a company’s internal coding rules.

We know that a SQL Server trigger is a piece of procedural code, like a stored procedure which is only executed when a given event happens. This implies that triggers cannot be executed manually. This fact makes them very hard to debug. The reason for this is that the debugging difficulties are not limited to the trigger itself, like what happens when debugging a stored procedure. Instead a trigger can affect the function of stored procedures, functions and even ad-hoc queries.

Check out these best practices.

SQL Server has no limitation on the number of triggers that you can define on a table or view, but as a best practice it’s recommended to limit the number to one trigger or at most two associated with the same firing event on an object.  For example, there is no problem if you have a table (or view) with three triggers and each of those triggers fires separately for INSERT, UPDATE and DELETE statements. Having more triggers per object adds unnecessary complexity at the time of debugging and establishing trigger execution order. If you have many triggers per object, I suggest you to review your business rules. Take some time to move the code of those triggers to stored procedures and then add the call of the stored procedure to one single trigger.

This is a very common mistake, especially when an inexperienced developer tries to enforce some kind of user defined data integrity constraint.

In order to explain this, let's take as an example the code from the tip SQL Server Referential Integrity Across Databases Using Triggers where I use triggers to enforce referential integrity across databases. If we take a look at the script below you can see that I am checking for the existence of matching rows between the DELETED pseudo table and the HR.dbo.Employees table and doing this as a set instead of row by row.

In the example code below, I will show you how the same trigger could be written using a RBAR (Row by Agonizing Row) instead of a set-based logic. Where each row is processed one by one and will be much slower.  This is bogus code and a worst practice.

You should try to avoid creating triggers that contain calls to stored procedures or user defined functions. When working with triggers we must aim for fast execution, and including calls to other objects may end up resulting in excessive recompilations and non-efficient plans being cached. You can also suffer from parameter sniffing if you are unlucky enough when executing stored procedures or functions from inside a trigger.

In the case when you cannot avoid calling other objects because your business rules are complex, then make sure you focus on optimizing the code of the stored procedures or user defined functions you are using inside the trigger.

Another thing that you must watch out for is nested triggers. Nested triggers are triggers whose execution fires another trigger, either on the same table or a different table.  A particular case of a nested trigger happens when a trigger fires the execution of another instance of itself, this is known as a recursive trigger.

Triggers possess a quality that stored procedures don’t have: They are invisible to the user. In other words, if you are not aware that there is a trigger associated with a given table that your code is using, your code may not work as expected. This can take you a lot of time to figure out, especially if your code is large and complex. Let’s take a look at an example. Suppose you are creating a query that inserts data into a table, let’s call it Customers, and this table has a trigger associated with it. If the trigger on the Customers table is not documented you will for sure spend a lot of time figuring out why the query you are coding keeps failing.

In the next code section, the code for the table and trigger creation is set up in the test environment. As you can see, the INSTEAD OF INSERT trigger replaces the value of the CustomerSince column with the current date (i.e. the value of the GETDATE function).

Now let’s see what happens when we try to insert a row with a specific value for the CustomerSince column. 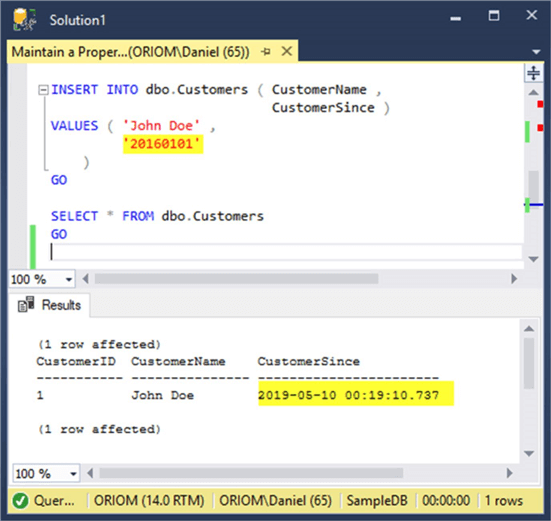 Using remote queries in triggers is a bad practice. Distributed queries have detrimental effects on performance and you should avoid this practice if possible.  In the case you have to implement referential integrity between databases residing on different servers try to keep the usage of remote queries to a minimum.

This is best practice we often forget. Let me be clear, from a logical point of view you can make your validations wherever you want, but from a performance point of view it would be great if we check the conditions at the start of the trigger’s code. For example, you can check if there was a row affected before starting to run any code by using the following lines.

By using the @@ROWCOUNT statement you can check for the rows affected, and if there were no rows affected, return execution to the caller and don't bother executing the rest of the trigger code.

Additionally you can check for changed column values (either inserted or updated) by using the UPDATE (Transact-SQL) or the COLUMNS_UPDATED functions.