SQL Server triggers can be useful, but also tricky to use.  Most people think about putting triggers on tables, but did you know that you could also create triggers on views?  In this tip we will cover how this can be done as well as how to control what can be updated using a view and how to control with a trigger.

When you are learning about triggers, you will find there are not many topics that are harder to understand.  The topic in question is the one we are referring to in this tip, implementing triggers on views. The difficulty arises because you need to have a solid base of knowledge on both triggers and views.

If you have read my previous introductory tip SQL Server Trigger Example, you know that a trigger is a piece of procedural code, like a stored procedure which is only executed when a specific event happens and the trigger its executed. Since we are talking about triggers on views, the triggering event will be any DML statement using the view.

Due to the nature of INSTEAD OF triggers, which allows us to create a wrapper to DML statements, there are different scenarios in which you may want to use triggers on views in your database application.

By using INSTEAD OF triggers, we can change the behavior of INSERT, UPDATE and DELETE statements for a given view. In other words, we can perform certain validations before making a change to the data.

With the combination of a view and a trigger you can create row and cell level security on tables. Before SQL Server 2016 this was the only available method to enforce row level security.

Perform Changes on a Complex View

Views are very restrictive when you want to modify their data, especially if there is more than one table involved in the view.

When you create a view, you must obey the following conditions in order to make the view updateable:

The only way to make data changes on a non-updateable view is by using INSTEAD OF triggers. This way you can use procedural code to overcome the limitation.

I created a few scripts to show you how to implement a very simple security enforcement solution by using views and triggers.

In a test database, run the following script to create a table named Employees.

After creating this table, we need to insert some test data.

Now run the next script to create an additional table named Users. This table has a check constraint for the column UserGroup in order to limit its possible values to 'HR', 'IT' and 'Other’ which aims to represent the security hierarchy of a sample company.

After creating this table, run the next script (or adapt it to your environment) that will add two existing logins into the Users table. One of the users will have permissions to access salary information when querying the vw_Employees view and the other will not.

Additionally, run the next script to create the vw_Employees view.

Now that we have created the view it’s time to create the trigger that will protect the vw_Employees from unauthorized changes.  The below will just check to see if the person is in the HR group and if not, it will throw an error.  An actual update is not done, but could be added to the code below to update the data for the person that has access.

Finally, we have everything set up to start our test scenario.

In the next script you will see that I execute the same update statement in the context of the two different logins we had granted permission on the Users table by using the EXECUTE AS command. 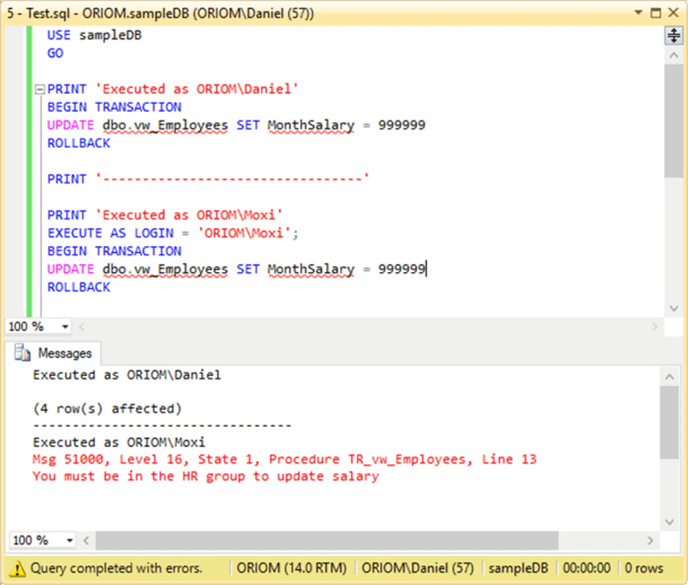 Take into consideration that this is an example intended to show how to use triggers on views and therefore I omitted a few steps that in case you want to implement something like this in production you have to do some additional steps. Just to know, you will need to secure the employees table so those who access the database cannot modify the data in the table directly.