In the article, SQL Server Query Execution Plans in SQL Server Management Studio, I gave you an initial look into how to launch and read a graphical query execution plan. We're going to dive deeper into the different opportunities for information sources within the graphical execution plan itself. Yes, you read that right. There are other sources of information in the graphical execution plan that are not readily apparent at first blush. This tip will focus on Tooltips and the next on the Properties window.

Those of you who have been reading my articles for the past two years have heard me state the values of being able to read Microsoft. What I mean is that Microsoft as a software development company spends many hours ensuring that their products have similar graphical user interface (GUI) design and behavior. Frequent users of their products be they accountants using Excel or DBAs using SQL Server Management Studio know that if they were to select Tools from the menu bar in their application that they could drill down into Options and then make modifications to their instance of the product. They know that if they right click in the application they will get a pop-up window with additional options. They also know about the tool Tooltips that occasionally pop-up when you hover over a toolbar button or area of the GUI long enough; those little yellow boxes with additional read-only information about the specific aspect of the GUI that they are hovering the mouse over at that point in time.

Just like the many other Microsoft products, SQL Server Management Studio also has those tooltips. The graphical query execution plan takes it to a new level, with monster-sized tooltips as you will soon see.

Remember that first query and graphical execution plan I presented in the earlier tip in the series? If not, here it is below. I will continue to use it as the basis for our discussion. This is a very simple SELECT statement against the Northwind sample database in SQL Server, with a filter and sort operation thrown in for good measure.

In the above estimated execution plan, I have added numbers 1 through 5 to help better explain each operation.

Let's look at the tooltips for each of the operations in this simple execution plan, working our way from right-to-left just as you would read the plan itself. You will see similarities between the tooltips for each operation, but you should note that there are quite a few differences as well. You also may be surprised to learn that even the arrows denoting data flow between the operator icons have associated tooltips. 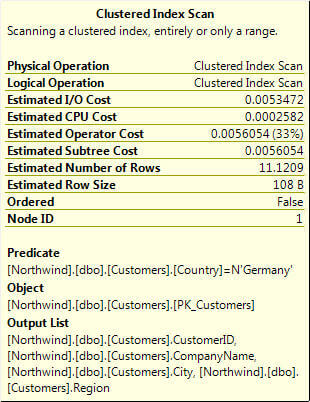 I want to take some time here to review each of the metrics offered in this, the first tooltip we've looked at so far. From here we will only focus on the new / different line items in subsequent tooltips for each operation. You'll see that the tooltip presents the type of operation as well as a standardized description of the operation initially. This is followed by (in the case of estimated execution plans) estimated operational metrics. If this was an actual execution plan you would have also seen the Actual Number of Rows involved in the operation after the Physical Operation and Logical Operation metrics.

These line items are then followed by the Predicate, Object, and Output List of columns for the operator. Predicate is the term used to describe the portion of a query used to filter, describe, or compare sets of data. In this case it the portion of the query that filters the results for just those rows where the country of interest is equivalent to 'Germany'. The object used as a tool to accomplish this task for this specific operator was the primary key on the Customers table. The output list is just that, the list of columns that are output from the process being described: CustomerID, CompanyName, City, and Region (the columns that are to be returned in our SELECT statement.

However, the actual query plan also includes the Actual Number of Rows:

The tooltips associated with the data flow arrows are quite simple, they provide information relating to the estimated (or actual) data moving between operations in a query.

The tooltip for the Sort operator and Clustered Index Scan operator are identical in the metrics they capture. Obviously the values for these metrics differ. You'll see that the Estimated Subtree Cost has now been incremented by the cost of this operation as well as all preceding operations. 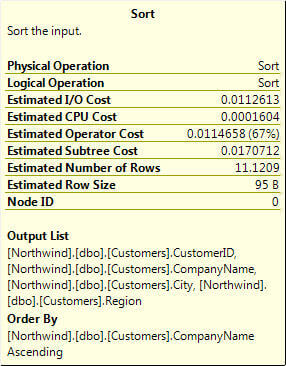 Identical in content (but not necessarily values) we next encounter the data flow arrow between the Sort and SELECT operations. We're almost done!

Take note that the SELECT operator's tooltip is drastically different from the other operator tooltips we've seen so far - the DML (Data Modification Language actions such as INSERT UPDATE DELETE) will also differ compared to the other operators we've seen to date as well as the SELECT operator presented here. We will look at the other DML operator's tooltips as they come into the discussion in future tips. In the case of the SELECT operator we have a new line item: Cached plan size. Cached plan size denotes the amount of memory this query plan is consuming in the stored procedure cache. This value is useful if you are troubleshooting memory issues specifically-related to cache performance. 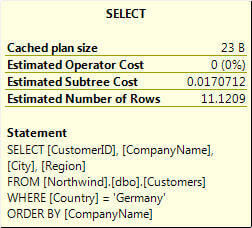 There you have it. Our initial dive into reading the wealth of information presented in the tooltips for the graphical query execution plans in Microsoft SQL Server. These tooltips provide us with substantially more information than the graphic portion of the execution plan. From costing information to amount of actual data affected at each step of the process, the tooltips give us a greater insight into why and how the Query Optimizer responds to our T/SQL code. Our next tip in the series will focus on the Properties window available to us in SQL Server Management Studio as it pertains to execution plans.